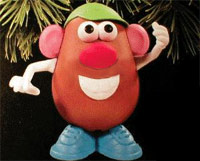 Life is tough when you're a small potato in a big world.They called him Mr. Potato Head, because his head looked like a potato. But beyond the superficial nomenclature, he was a potato. His limbs, his facial features, his clothing, it was all just one big fat lie smothered in butter, sour cream, and even chives. Mr. Potato Head could be any person he wanted to be. He could blend in anywhere, from the United States to El Salvador to Cambodia. What was his secret? All it took was ripping his flesh off and slapping on a new smile. He barely had an identity of his own, but to his enemies, he was legendary. To them he was known as death by starch, the haunting specter of the end budding into their lives and taking everything away in one bright flash.

What transforms a potato into a monster? What tears the fear of death and the fear to inflict death away from an otherwise sane and rational vegetable? Join me as we take a look back at Mr. Potato Head, and the shattered life he lead.

Mr. Potato Head started out as simply Potato Head. Although America is and was a land of opportunity, there will always be some who fall through the cracks of opportunity's gracious fingers, and land in the lap of despair. Potato Head was one such individual. In his youth he lived on the mean streets of Idaho, getting bullied or bullying others, doing whatever he had to do in order to survive. He never knew his roots. There were no parents or family waiting to raise him. He simply woke up one day in a patch of dirt with a chip on his shoulder and a world to blame. He never cut it at any of the shelters that would take him in. He never cut it in the schools, either. The streets were the only place that wouldn't kick him out.

Like most children of the streets, Potato Head became gifted at surviving on his own – a skill that would serve him well in later endeavors. He was quiet and reserved, but never afraid to stand up for himself or even break the rules. His rule breaking, and the stints behind bars that followed, were ultimately what paved the way for Potato Head's most prominent successes, though his successes were also his biggest tragedies. After his third time in jail, the only places that would have him were prison or the army. He thought about continuing on his current path, but he knew where that would lead: death row. Would they boil him? Would they grill him? Or would he die in a shoot out, and be carried off wrapped in an aluminum foil body bag. Potato Head realized he really only had one choice. He joined the army, and forever sealed his fate.

At first Potato Head was horrified by his new job. His initial assignment had him peeling potatoes. It was this job that gave him thick skin, and a gut that could stomach anything. If he could peel the flesh off of his brothers and leave them raw and naked, ready to be eaten, what other horrible deeds could he accomplish? How deep did his tolerance run? He carried out his potato skinning duties with brutal efficiency, holding his breath under the rising tide of starch. Was he a mess hall Hitler? Was he running a potato gulag? It didn't matter. He had a job to do, and he was keeping out of real trouble, even if it meant betraying his people. Even still, he didn't survive potato duty unscathed. Sometimes he would save the skins, fixating on the potato it belonged to, wondering what kind of life he had destroyed. Was this all that made a man, he wondered? Just a blemished peel that somehow encapsulated an identity? 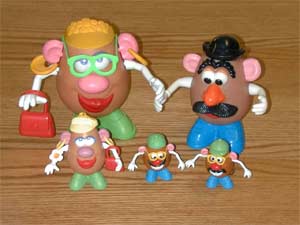 Things were looking bright for Mr. Potato Head.His triumph skinning potatoes attracted the attention of superiors, who saw Potato Head as being a prime candidate for advancement. He did his job, asked no questions, and never caused the slightest bit of trouble. The brass began grooming him for promotion. He was a real go-getter, the kind of man you could really sink your teeth into. He proved this time and time again in subsequent assignments and missions. Before long he was highly decorated, garnished in an assortment of cheeses.

By the time he reached the rank of major, the army had had enough of his strange private life. No one cared for his at times bizarre asexual habits, and didn't want that sort of image associated with the army. Potato Head had to start a family. Thusly, Mr. Potato Head was born. As was his wife, Mrs. Potato Head, and three adorable spuds. With a solid career in the military and a family, Mr. Potato Head seemingly had everything a vegetable could want. Still, every night when he closed his eyes, he saw those poor potatoes crying out as he tore their flesh – their identities – off and piled them up. Worse, he would sometimes have that dream where he was flying, and people were riding in his scrotum. 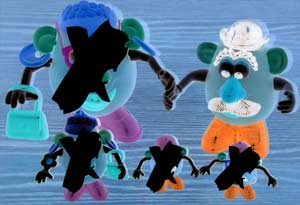 Then everything fell to pieces. Mr. Potato Head's dreams were shattered.Mr. Potato Head's life fell to pieces in the summer of 1965 when he returned home to find his family murdered. His poor wife, Mrs. Potato Head, had been cut to pieces and badly burnt in cooking oil. And his children, those poor souls, they were shown no mercy. His sweet potato of a daughter had first fallen into a diabetic coma, and was then locked in a freezer. His two young sons, both budding athletes, were mashed to a fine paste. Things had never been worse for Mr. Potato Head, who sobbed for the first time in his adult life. He spent one long night alone with his dead family, holding a gun to his forehead and staring at the death that surrounded him.

The months following the death of his family were considerably stressful for Mr. Potato Head, who reacted by constantly adjusting his appearance. He would grow a moustache or a beard, then immediately shave it. He would put on glasses, fix his hair a certain way, then another way, then he would take off the glasses. He would wear a hat one day, be bald the next, and as ragged as a caveman a week later. With his family gone, he could scarcely remember who he was. He had suddenly become a man with no identity. Someone had peeled off his skin and as much as he tried to restore it to its previous state, he could never get it right. 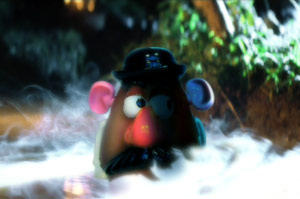 C'mon baby, take a chance with us.Before he fell completely into oblivion, Mr. Potato Head was given one last opportunity. The CIA offered him employment doing all sorts of dirty work. There would be no criticism of his lifestyle, no demands of him personally. It was all business. He would work alone, isolated, and report only when the job was done. Furthermore, he would need to utilize disguise and deception. It was likely that the last two requirements interested him most. His obsession with identity and appearance was the only thing left driving him. To the CIA he was merely the right kind of worker. He had nothing left to lose.

Before long he was working in Vietnam, Cambodia, and elsewhere. He wore many faces, became many people, and killed many more. His brain was scrambled, a mess of hash browns, but some twisted force kept him moving. Mr. Potato Head was literate, and was known to keep a journal. Looking at some of his entries gives a deeper insight into his psychological trauma. 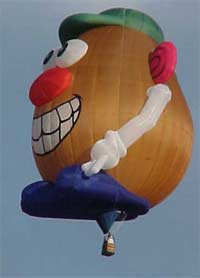 I watched a sickly little arm snake out from under my skin and search for dirt. I cut it off. I could have made a new me, but I killed it instead. That's what I'm going to do to these... people... here in the jungle. I'm going to cut them off so that they can never be reborn as something greater.

They call me a murderer. What have I done to them that I haven't done to myself?

His employment with the CIA continued up until 1980. During his duty he accumulated a body count in the hundreds, from lowly peasants to high-ranking officials the world over. Some would call him a patriot, others a murderer. Mr. Potato Head himself would probably agree with the latter accusation. Inside his brain was a burning hell, an endless oven that baked his soul alive, constantly prodding at him as he tried desperately to shield himself from the flames. Sometimes he wondered if he was completely hollow, if there was anything inside him of substance, of if it was just another web of masks and lies. Was he really full of starch, or was he just a big monster? The questions never stopped tormenting him, and perhaps that's why he did what he did in the end.

In his last days on Earth, Mr. Potato Head gave instructions to a Salvadorian government official to have Archbishop Oscar Romero assassinated. He then made one last update to his journal, revealing the horrible truth to himself and to his handlers.

I killed them! Oh God! I really did it. I put on fake skin, I became someone I killed, then I took out revenge. I killed the family of the man that murdered me. I killed my family!

Oh god help me… what have I done?

Mr. Potato Head then took his own life. He body was decorated with cheese and broccoli. Even after death, he served his country one last time for one last mission. He was remembered as being delicious.

Howdy folks, Taylor "Psygnosis" Bell here to administer a liberal dose of button-mashing excitement! Olympic Summer Games 96 got here eight years ago and I'm just now getting around to writing about it.

Almost a year ago I reviewed a rom called Winter Games, an in-depth look at the detrimental effects winter sports can have on the video game industry. But since we at SA are committed to the kind of Fair and Balanced journalism that will get us sued, I have obtained an ultra-rare copy of this game to demonstrate that games based on summer sports can be just as shitty. Instead of being a collection of minigames, this is essentially one minigame repeated over and over with minor graphical differences – sometimes you stab the ground with a pole, sometimes you stab the ground with a javelin and sometimes, if you’re particularly bad at hitting the up arrow, you fall and stab the ground with your face.

Check out the full article before I smack your bitch up.