Occasionally during our mundane activities we come across something so arcane, so bizarre, so completely out of place and nonsensical that our brains have no choice but to shut down and start humming the theme song from "Mannix" over and over until the offending object has been properly removed. For example, this happens to me every time I catch a glimpse of myself naked in the mirror. Such a traumatic event recently occurred while I was casually strolling through the aisles of the local Hy-Vee grocery store a couple days ago. I had been minding my own business and looking for some ripe brussel sprouts when I stumbled upon the following bag of abomination: 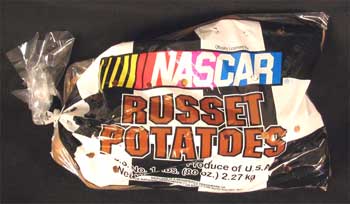 Your eyes do not deceive you: that cheap plastic wrapping contains roughly five pounds of officially licensed NASCAR Russet potatoes. Let me give you a second to let that fully sink in, as your brain may experience slight difficulty accepting what you see. Each and every potato inside that bag has been thoroughly inspected by a highly trained team of NASCAR vegetable technicians to meet the rigorous qualifications necessary to display the festive rainbow-colored NASCAR branding. As you read this sentence, there are millions of inferior Russet potatoes scattered across the world in bleak, desolate fields of abject failure, exiles unable to pass the strict quality standards imposed by the NASCAR committee of potato engineers. These unwanted bastard vegetables are apathetically tossed aside, doomed to waste the remaining weeks of their miserable lives in the presence of fellow vegetable outcasts, while bags of coveted NASCAR Russet potatoes are passed throughout our society with the weight and importance of pure gold dipped in liquid diamonds after they were blessed by Vin Diesel. 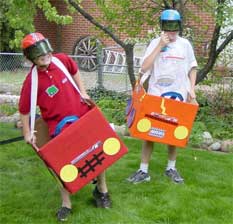 While the aerodynamics of these makeshift deathtraps may be lacking, their hearts are in the right place (their chests).

While I do occasionally consider myself to be a somewhat non-stupid person, I have absolutely no idea what CEO decided NASCAR should sponsor one vegetable in the entire grocery store and why this vegetable should be a bag of Russet potatoes. I tracked down one of the store managers and asked if he knew of any other NASCAR-approved fruits or vegetables, to which he paused shortly before responding, "well... I think Coke sponsors NASCAR." This was very helpful information to me because not only was I unaware of Coca-Cola's affiliation with the NASCAR racing circuit, but I additionally never knew soda was considered a vegetable to people managing large chains of grocery stores. Other items the Hy-Vee manager dubs "vegetables" undoubtedly includes hamburger meat, toothpaste, and the rear bumper of his 1964 Ford F-100.

I couldn't help but ask the cashier about my cryptic NASCAR Russet potatoes as she carefully scanned each item so every single square millimeter of barcode was properly read by the space aliens in the cash register. She seemed just as confused as I was, unable to rationalize how or why NASCAR began their own line of designer Russet potatoes. "Well a lot of people do like NASCAR," she so astutely pointed out. I explained that while the auto racing circuit was indeed very popular here in the midwest, that still didn't really rationalize the choice to brand their own line of potatoes. "But why potatoes?" I asked her, determined to solve this mystery. "Why not NASCAR beets or NASCAR broccoflower?" She suggested that Russet potatoes, much like NASCAR races and sassy stickers displaying Calvin peeing on a Ford or Chevy icon, were quite beloved around Missouri. "Well yes potatoes are popular amongst NASCAR fans," I replied. "But so is cheap beer and heavy TV remotes which can be used for spousal abuse, yet NASCAR refuses to market either of those. Why potatoes?" She had no answer and began giving me that "I'm not afraid to call security" look I know so well.

In the name of science and discovery, I decided to purchase a bag of these NASCAR Russet potatoes and determine exactly what makes them so special that a professional racing circuit deemed them worthy of sponsorship. After using a whole shitload of really scientific things like test tubes and batteries, I concluded that since NASCAR paid to sponsor these potatoes, they obviously must be the fastest potatoes on Earth, tiny little vegetable race cars able to deliver all the tire-squealing, brake clenching excitement of the professional racing circuit to our very dinner plates. To test this theory, I created a tiny racetrack in my driveway which I dubbed "The Concrete 100" and dressed up the most beautiful potato in the bag as legendary driver Dale Earnhardt's car, hoping that my highly scientific tribute to him would win over racing fans across the globe and therefore make me popular and attractive to members of the opposite sex, whichever sex that may be. The following racing results will undoubtedly go down in the annuls of potato racing history.

THE RUSSET POTATO NASCAR CONCRETE 100: RACE OF THE DAMNED 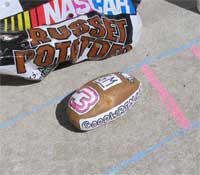 Russet Potato Dale Earnhardt cruised up to the Concrete 100's starting line with the confidence and bravado one could only obtain from winning their previous 47 starts, most recently in the Russet Mulch Garden Speedway and the Porch 300. Since the dry, tough concrete was easy to grip, no particular parts on Russet Potato Dale Earnhardt needed to be changed or replaced for specific track conditions. This worked out particularly well since there aren't any parts which can be changed or replaced on Russet Potato Dale Earnhardt or pretty much any potato except Mr. Potato Head, who is technically not even a potato according to various leading scientists in the potato field. If you'll bother to examine a Russet potato, NASCAR or otherwise, you'll undoubtedly notice that it is composed of two distinctive parts:

If you break or damage a NASCAR Russet potato and then try to get it repaired by trained potato technicians, please keep in mind that they probably won't be able to help you out, even if you purchased one of those wonderful Best Buy Product Replacement plans. I'm not even sure where trained potato technicians hang out these days. They probably hide behind the Crate & Barrel. 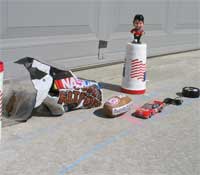 Since I was the sole owner of the Concrete 100 racetrack (as well as all its participants), it was my duty to determine who would compete against the almighty Russet Potato Dale Earnhardt. I spent at least three, possibly four minutes compiling a list of every single NASCAR driver that I was familiar with, both past and present. This list turned out to be composed solely of Dale Earnhardt and his son, Dale Earnhardt Jr., although I have reason to suspect my itemized spreadsheet doesn't quite reflect the entire rich history of the NASCAR circuit. Although most people are not aware of it, one of the biggest racing rivalries to ever exist took place between Dale Earnhardt and his son, Dale Earnhardt Junior. For example, although Dale Earnhardt broke many past records and was considered a much better driver than his son, Dale Jr. is currently considered a better driver than his father due to the fact that he's not as dead quite yet. Now that's a rivalry!

I decided to pit Russet Potato Dale Earnhardt against his son in the form of Tiny Son Dale Earnhardt Jr. Remote Controlled Car With No Batteries, which my girlfriend recently bought at Target for reasons unknown. I knew this would yield one of the most exciting and intense races I would ever witness, and since I've never actually been able to physically sit through a NASCAR race without changing the channel or seeing how much beer I could drink until the TV looked like an indeterminate white blob continuously blabbering about Rogaine, I had nothing but the strictest confidence in my plan. As you will soon find out, even the most genius plans involving potatoes and heavy drinking can fail. 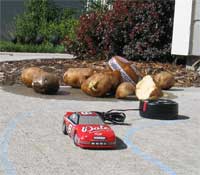 The contestants shot from the gate the moment the checkered flag fell. Tiny Son Dale Earnhardt Jr. Remote Controlled Car With No Batteries was tied neck and neck with Russet Potato Dale Earnhardt for the first quarter lap, demonstrating the intense passion for racing these two inanimate objects held so dearly. Then tragedy struck; after being smacked broadside by a stray cat who casually wandered onto the track, Russet Potato Dale Earnhardt lost control and flew off the course into a crowd of shocked NASCAR Russet potatoes in the stands, causing mass chaos and confusion throughout the Concrete 100. Fleeing potatoes tried to escape only to be trampled by each other during one of the most horrendous and shocking moments in driveway potato racing history. Tiny Son Dale Earnhardt Jr. Remote Controlled Car With No Batteries continued to race around the track unaware that his father had veered off the course and into the open awaiting hands of death's icy grip. I'm not exactly sure how my metaphor insinuated death can simultaneously have his hands open while gripping something, but that's the magic of NASCAR my friend. Tiny Son Dale Earnhardt Jr. Remote Controlled Car With No Batteries began to slow down midway through the first lap, perhaps because he noticed the unbelievable potato carnage and destruction behind him, or possibly because nobody was there to pull him any further on the track.

Then all hell broke loose. 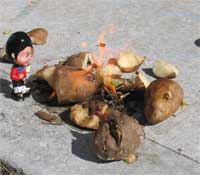 Russet Potato Dale Earnhardt burst into flames upon colliding with the innocent NASCAR Russet potato fans frantically scrambling to flee the scene, showering fragmented chunks of flaming tuber across the brutal concrete killing grounds. Plastic Bobblehead NASCAR Russet Potato Fan ran towards the wreckage in attempt to help the weak and wounded, but the uncontrollable inferno prevented him from administering the aid needed. Since one of the racers was currently in about 60 separate pieces, most of which were on fire, I decided to call off the race citing "extreme weather conditions" (the sun was causing me to sweat more than I normally sweat, thereby clouding my racing judgment) and asked my dogs to write a really serious press release which contained words like "unfortunate" and "unforeseen" and "free bean dip."

Eventually the blaze burned out and paramedics were allowed to rush in and transport the critically injured potatoes to a nearby burn victim ward (a large white bucket full of brownish water cryptically labeled "OXIDIZER") where they were drowned and had their next of kin informed via a series of insulting Viagra spam emails. I additionally decided to cancel the extensive after-event show consisting of a terribly noisy fly-by courtesy of Jed's Incredible Mystical Flying Fools, which was simply Jed "Jed" Kirchner throwing a series of paper airplanes at nervous spectators while a boombox blasts Chris de Burgh's "Lady In Red" at a few hundred thousand decibels. 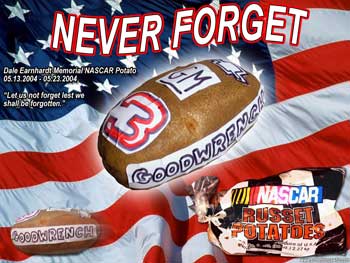 I hope the NASCAR Russet potatoes have transformed your heart and mind with the pure energy of love that only NASCAR-brand produce can. Goodbye, and God bless.