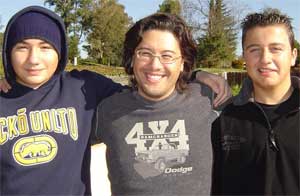 John Romero with two of his three teenage kids.
NOT SHOWN: his teenage wife.

I'll be the first to admit that I've grown a bit skeptical of the Internet. Years and years of nonstop exposure to endless misspelled spam mail, misspelled computer viruses, and misspelled homepages dedicated to misspelled erotic Psyduck fan fiction has left me an empty husk of a human being, a walking corpse stuffed full of wasted lies and regret. Oh, and some of that nonfat Jell-O pudding too, because I honestly can't get enough of that shit. The Internet amazed and enthralled me when I first logged on over a decade ago, and its ever-increasing bounty of digital entertainment continued to hold my interest for years. Unfortunately, I've become jaded and desensitized in recent years due to the sharp decline in quality of the online entertainment that can be derived from our beloved information superhighway. Fortunately today's article is not another nonstop whiny bitchfest listing the myriad of ways I feel the Internet has personally failed me and is somehow responsible for murdering my pets. No, today is a happy day full of hope and renewed joy for all of us because it proves the Internet still holds the potential for love, happiness, and unbridled passion because famous game designer and hair model John Romero married his Internet high school sweetheart, Raluca Alexandra Plesca!

I just got back from Romania yesterday; back from seeing my woman, Rhaluka. WE ARE NOW MARRIED!!! We didn't expect to have a big ceremony or anything, just her parents and sister and a couple friends. Well, her parents made sure there were several people there and it turned out to be just great - lots of flowers and warm wishes for us. We even got rice thrown on our way out of the marriage hall and into the car.

I have a DVD video of everything and lots of pictures. We're VERY HAPPY and the next step is to get Rhaluka her VISA so she can finally move here to San Diego. I hope it doesn't take long! So there it is: introducing Mrs. Rhaluka Alexandra Romero!

I would like to extend a hearty "congratulations" to Mr. and the new Mrs. Romero on their exciting first step into the wonderful world of holy matrimony! I predict a long series of days or possibly weeks of unbridled love before you, a procession of hours where each ten minutes seems even better than the last, and will undoubtedly NOT turn out like Mr. Romero's previous three failed marriages which produced three failed children. This partnership of theirs is based on mutual love, understanding, and a deep sense of commitment which those other marriages lacked. If some of you folks out there are not familiar with Mr. John Romero and his legacy of contributions to the gaming world, let me give you a brief overview of his amazing accomplishments: 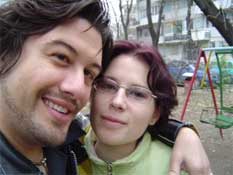 Mr. and Mrs. Romero share a tender moment on the playground where her parents allowed her to have their honeymoon.

1982: Worked on the legendary "Alien Attack" and "Trashman II" games. I'm fairly sure neither of these games were ever released.

1984: Worked on the legendary "Krazy Kobra" and "Bongo's Bash" games. I'm pretty sure neither of these games were ever released.

1986: Worked on the legendary "Zippi Zombi" and "Operation: Obliteration" games. I'm somewhat confident neither of these games were ever released.

1989: Worked on the legendary "Zappa Roids" and "Magic Boxes" games. I'm reasonably positive neither of these games were ever released.

1993: Had some involvement with working on "DOOM," a game which was described as "the Trashman II of the 1990s" by a famous publication whose name I cannot recall offhand.

1994: Worked on "DOOM II," mostly as "the guy who stood around in the background and shouted suggestions that were ignored by the people who actually worked on the game."

1996: Grew a lot of hair while watching his coworkers program "Quake." Used IRC frequently and quipped hilarious jokes about boobs while standing next to the water cooler.

2000: Singlehandedly responsible for the title which revolutionized the PC gaming experience, "Daikatana," much like how the colon cleansing industry was revolutionized by the invented of "the long stick with a pink sponge glued to its end."

2001: Still basking in the glow and continued success of "Daikatana," Romero released "Hyperspace Delivery Boy!" which sold over one copy and was rumored to have once been spotted at a legitimate software store in a Portland mall.

2004: Married a Romanian teenager he met on the Internet, a girl undoubtedly won over by his gaming prowess and magical talent to make the financial results of entire companies disappear.

1998 POWER PLAY ION's December release, Daikatana, has the video-gaming world waiting in the sort of anticipation they usually reserve for new Metallica CDs. In it, your hero, Hiro Miyamoto, uses a magic samurai sword to travel through time while vanquishing his enemies. Expect every kid worth his carpel tunnel syndrome to be clamoring for it come Christmas.

Oh Time Magazine, it's like you opened up a gateway to the future!

The accomplishment John Romero is most famous for took place during the time he ran a little Texas company he founded known as "Ion Storm." He was able to accomplish the impossible with this company, assuming "the impossible" means "wasting $40 million over a period of four years while releasing only two games, one of which revolved around hanging out with time-traveling minorities who hit robotic frogs with sticks." Now when I previously referred to Mrs. Romero as John's "high school sweetheart," I meant it literally, as this lucky young lass is a scant 18-years old. Yes, that's correct, Mr. Romero, a 37-year old game designer, chose to marry a 18-year old Romanian over the Internet, thus proving that true love knows no age barriers or taste limits. 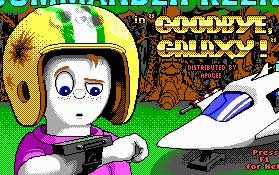 John Romero's new brother-in-law checks the time; he doesn't want to be late for "Bananas In Pajamas!"

Now some of you more negative Nellie naysayers might find some fault in a 37-year old game designer (who has three kids, one a 15-year old son, and was previously dating a Playboy model) marrying an 18-year old Romanian girl (who first began flirting with Mr. Romero online when she was 15). To you worthless crumb-bums I say, "a pox upon thee!" You obviously have no concept of true, pure love and the obstacles it can overcome like the car from Bump N' Jump which could leap over small bodies of water and large boulders which would unfortunately fall from pickup trucks for no readily apparent reason. So if you've got a potty mouth and are just waiting to write something mean-spirited and nasty about their whirlwind romance, let me remind you that you do not grasp their complex relationship and do not understand unbridled love and cannot comprehend all the delicate intricacies of marrying a Romanian girl in high school who is half your age. Let me list just a FEW of the many, many benefits that Mr. and Mrs. Romero will be able to take advantage of in their relationship:

1) Mr. Romero will be able to easily help out Mrs. Romero when she encounters a really difficult math problem during her high school finals.

2) If Mrs. Romero attends school here in the great US of A, Mr. Romero will be able to attend her parent-teacher conferences in case her Romanian parents are unable to make the long trip.

3) Mr. Romero's 15-year old son can go to the same high school and college as his new mother, thus creating an unbreakable mother / son relationship. They could share notes and gossip about "that ugly Becky Leeman girl."

4) Nothing is more romantic than taking your wife out to a bar and celebrating her 21st birthday with her first taste of liquor! I know that three years is a long time to wait for this momentous occasion, but their love will make the 36 months seem like a scant 36 hours!

5) When somebody asks Mr. Romero about how he first met his wife, he can fondly describe the story of how he was on IRC visiting the "#TeenPokemonClub," when suddenly "-={TRU_LUV_69}=-" messaged him with the most romantic series of ASCII characters ever.

6) If Mr. Romero ever catches somebody ogling his wife, he can shout, "she's only 18 you goddamn pervert!" really loudly.

7) Mrs. Romero won't go through menopause until roughly 30 years after Mr. Romero has died of old age, thereby saving him the time and effort of pretending that he gives a shit about her hot flashes.

8) When Mr. Romero visits Mrs. Romero's family for the holidays, he'll be able to relate to their humorous anecdotes and references of the 1970s.

9) If Mrs. Romero ever gets sassy or gives Mr. Romero any backtalk, he'll be able to send Mrs. Romero to her room and ground her for the weekend. If things get really heated, he can take away her TV and car privileges.

10) If Mrs. Romero gives birth to a girl, then Mr. Romero could divorce his wife and marry her when she hits 15. I guess he could still do the same if she gave birth to a boy, but that would just be weird.

As you can tell, this is truly a love that will last throughout the ages like a rock-hard rock that is so hard that you can't break it with a hammer or you know, whatever you'd use to break a rock assuming you want to break a rock. If you would like any further proof of this claim then look no further than Mr. Romero's romantic thread where his wife responds with one of the most deep and meaningful replies possible:

You'll note that this simple, one-sentence reply is just oozing with love like a gelatinous cube that has just digested Cupid. She begins her fantastic reply into Loveland with a big grinning blue smiley face, Internet-lingo for "I am smiling and have one row of gigantic teeth because I am a freakish mutant from Romania who has found love in the form of a flabby hairball the age of my parents." She proceeds to express her devotion to Mr. Romero by stating, "I love you so much, John!" and follows it up with "('~')" and "<3." Now I know what the "<3" stands for, it's supposed to be an Internet heart which has tipped over on its side and now resembles a large ass protruding from a snowcone. However, I have absolutely no idea what "('~')" is supposed to stand for. Is it Kirby with a fake moustache? Is it some secret Romanian Internet-speak that stands for "I am wasting my precious, fleeting youth by marrying a doughy, long-haired freak who has wasted more money than I'll ever see in 400 of my impoverished Romanian lifetimes?" These are secrets we may never know, as we lack the intimate bond of Internet love which has linked these two beautiful creatures together.

There is absolutely no doubt in my mind that this partnership is one that will last, unlike Mr. Romero's previous three which were founded on a bedrock of lies and deception and three children. If some of Mr. Romero's kids were blessed with a heightened intelligence, perhaps some day they'll be able to share the same classes with their mother and continue to strengthen the bond of family. This, my friends, is all thanks to the miracles of the Internet! Thank you very much, Internet!