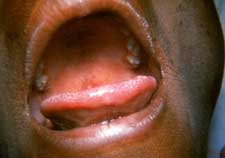 This is the first picture Google comes up with when you search for "mono," which is odd, because it's from a study on herpes. Mouth herpes!

Well, not "you" exactly. Actually, it's more along the lines of "me." Yep, just this past Friday, while you were reading Zack's hilariously malcontent article about NASA's shortcomings, I was busy getting diagnosed with mono. That's right, mono. The Kissing Disease. The Big M. The College Collapser. The Month-long Sleeper Hold. The Epstein-Barr Beatdown. It's actually sort of a relief, as here I was starting to think I was just lazy. This first week back from spring break, I was low on energy and lacking anything even remotely resembling an appetite, which I chalked up as the result of food poisoning from a particularly shady meal at Chili's. However, on Friday morning, I woke up with a slight tickle in my throat, by which I mean it felt like I had been gargling napalm. I looked in the mirror and noticed my neck had a peculiarly convex shape to it. I took a look inside my mouth and immediately came upon something a bit odd. My uvula, usually a free-hanging entity, was being strongarmed by a couple of goons that had emerged from the sides of my throat. That dangly little ball that we all know and love was not so much dangling as it was being squeezed between two swollen, red outcroppings of throat-meat that are not usually there. I took this as a sign that something more sinister than some bad steak tips was at work here. As I contemplated the matter, I was distracted by the always pleasant sensation of my throat trying to strangle me from the inside. After hocking up enough mucous to coat a Slip N' Slide, I decided to take action and consult a medical professional.

This is the second. Confusing, but hee hee! A monkey!

I presented my food poisoning story to the doctor, pausing frequently to marvel at just how much my normally sexy voice sounded like it was coming from underwater. The doctor, to her credit, listened to my entire theory, although I could tell she would have been just as happy if I had opted to shut the hell up and let her do her job. She took a throat culture, although I'm mildly convinced that she was getting payback for having to listen to my longwinded story, as she jammed her official medical Q-tip so far down my throat that she left cotton on top of my kidneys. The Q-tip came out coated in a reddish-orange syrup which looked sort of like sweet and sour sauce. If I knew then what I know now, I would have never tried to get the doctor to let me put it on my chicken wings. After taking the goop to the lab for study and eventual consumption, the doctor called for a blood test. I went along with her plans, largely because she did not explain until the last minute that she was talking about my blood. I'm protective of my blood, you see. I grow it myself from some of the finest marrow known to man. I take great pride in the quality of my bodily fluids, and I'm very hesitant about just going around giving out free samples to strange women who have just assaulted me with Q-tips. Nonetheless, I relented. Once the necessary amount of my precious, precious blood was withdrawn, I was sent out to a waiting room for strategic waiting purposes.

After a few minutes, the doctor came back to get me. She didn't say anything, but just smiled that beguiling, oddly alluring smile of hers and led me back to her office. There, she promptly turned around and held up a pamphlet which said "So You've Got Mono" in big red letters. She thought this was funny as hell. I was inclined to disagree, because I had mono, so frankly I felt I was entitled. The joke's on her, though, because I stole her little pamphlet's title and used it for this article. So clearly the victory is mine. 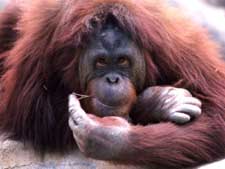 And this is the third! Another monkey! Hey, I'm going to like this disease!

The real problem with mono is that once you've got it, there's nothing you can do about it. It's going to last as long as it's going to last, and chances are, it's going to suck. There are certain symptoms that it seems like they could fix, though. For instance, the whole clapping tonsils deal is one that could be done away with. When you get mono, your tonsils swell up to the size of lemons in an attempt to asphyxiate you. It seems, then, that having mono would be perfectly good grounds for a tonsillectomy. I realize that the medical community does not want to perform unnecessary surgery, but I don't think this would be that invasive of a procedure. Right now, you could perform a tonsillectomy on me with a decent pair of tweezers and a couple good, strong tugs. I'm afraid that I'm going to cough to hard and they're going to get jostled around and end up getting lodged in my esophagus. I can bear the indignity of being diagnosed by a pamphlet with big, red letters on it, but I'm really not that keen on the humiliation associated with swallowing my own tonsils.

The point of all this is, my health isn't the best at the moment, and when my health isn't at its best, my humor isn't at its best. You try being funny while simultaneously blowing inch-thick mucous bubbles every time you try to exhale. So if I seem out of sorts or you don't see as much of me around on the ol' Something Awful front page, just know that it's because the mono is keeping me away, and not because I've been fired. Unless I do get fired, in which case, I'll see you all in Hell.

The Weekend Web: Nothing To See Here Folks

Hello internet friends, Zachary "Spokker Jones" Gutierrez here. Uhm, I too have mono! At least that's what I'm going to say when I tell Lowtax I'm calling in sick today. I thought of some other excuses like my grandmother got run over by a bus. I got drafted by the San Diego Padres to be their star pitcher. A dinosaur is holding Moof hostage in a cave on the moon and only I know the dinosaur's secret weakness. But I didn't think that Lowtax, a man who once scored four touchdowns in a single game, would go for any of that. The unfortunate truth is that real life has reared it's ugly head once again and ate my beloved Weekend Web. We'll be back with forums about female sex robots and retarded teenagers next week in a Weekend Web that promises to be bigger and badder than ever. Here is a preview of what's to come:

Spectacular! See you next week!