This is it folks! The deadline has come and passed and now it's time to announce the Golden Tapir Awards for the "Something Awful ‘Color a Tapir’ Internet Contest." I had originally planned to make the announcement of the winner just a short paragraph, especially after Richard "Boston Baked Beans" Kyanka, explicitly told me "never write about tapirs on my website again or you'll be on the bottom of the Indian ocean doing the Charleston in a pair of cement shoes." I tried to ask why he picked the Indian Ocean, but then he vanished into a vaporous whirlwind of sprinkles and brightly colored confetti. In spite of this warning, I choose to continue on with this Internet award show because of the huge amount of quality entries I received in response to this contest. When I saw my electronic mailbox in the North Pole literally bloated with mail sent by people from all over the world contributing their time and effort for such a noble cause, my heart swelled, and a single tear rolled down my cheek that I caught in a jar so the police couldn't use it for DNA evidence linking me to the random string of caretaker murders near the tapir exhibition at the zoo. So without further ado, lets hand out some Golden Tapys!

BEST TAPIR IN A SUPPORTING ROLE

I first want to say that everybody did a great job, and there were no real losers here today. I would also like to state that this is the first time art has ever been critiqued on a comedy website, and I thought of it in '89 while serving time in Kansas for stealing apples, so back off you jerks. The winner for this award drawn by "Arachiss" got a little crazy and colored the tapir purple. While in reality, tapirs are mostly brown, this is an example of letting your imagination go a little crazy and whisking the viewer off in a land where anything is possible. It is clearly a world of magic and opposites because the term "Frolixo Sucks" is drawn in the picture, and we know that is a ridiculous notion. Kudos to you, avant-garde Internet artist!

What's so great about the Internet is that people from all over can communicate their deepest feelings through various available mediums. This piece really speaks to me, and I truly feel what the artist, Adam Grant, was trying to say. The anger and frustration that this hypocritical society can generate can cause teens to lash out at the ones they love. I have some words of wisdom for you Adam: despite all your rage, you are still just a rat in a cage. Also the world is a vampire. I just thought of that right now.

Most tapirs are pretty conservative when it comes to vices such as drugs and alcohol, but the decade of the 60's created a generation of tapirs that experimented with all sorts of mind-expanding substantives. Leo Sylvester submitted this piece from his own experience of dropping some ‘cid with a far-out tapir back in 1967 during a "love-in" at Haight-Ashbury. My personal acid experiences were not as cool as this, and it usually ended up with me cutting my arms open with razor blades trying to get the spiders out that lurked underneath my skin but turned out to be just veins and bone. Don't worry, I learned my lesson about acid and now just stick to black tar heroin and lay slumped on a filthy mattress in the safety of my own home for weeks on end or until the paramedics come.

Chav is a true American, and he showed it by submitting this piece that he called "Lest we forget". I think it's a very important warning to all of us that the terrorism menace is far from over, and there could be one lurking even in the most innocent looking tapir. We can trust no one these days and, sadly, the tapir is no exception. If you see a tapir doing anything suspicious like eating vegetables, walking around, or sleeping, shoot first and ask questions later. Chav also wanted to dedicate this entry to all the boys fighting overseas, and hopes that this message of hope will turn the tide of winning the hearts and minds of the dead Iraqis. Go America! (This message brought to you by Fox News).

James Ward fully admits that he didn't have enough time to comply with the rules of this tapir contest, but he was nice enough to present a handy guide to help finish his lackadaisical entry. Unfortunately, I am far lazier than James, so the piece remains unfinished. Be that as it may, I have found that when it comes to art, sometimes less is better. It is minimalist and really makes you think about this world, this basic brutal existence. What if God was one of us? Would he be a tapir? If he was a tapir living in South America, if he tried to walk into a village to tell the good people the true meaning of life with his bellowing tapir honks and whistles, would the villagers listen to his wise words or just beat him to death with sticks and turn him into soup? It really makes you think.

BEST ENTRY USING A PICTURE OF ME AS A TODDLER 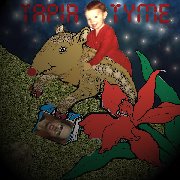 Who are you "Renee" and how did you get the source picture for this entry? What do you want from me? GIVE ME BACK MY SON!! There is nothing creepier than somebody on the Internet finding a picture of you as a young lad and slapping him on the back of a tapir for an Internet contest. That aside, this is a fine work of art, and worthy of a golden tapir award. Renee, I will send you your prize along with an online restraining order. Please stay 500 yards away from me and my red jumpsuit toddler pictures from now on. Thank you.

I just want to say that I find this entry totally offensive and it really upset me and my pet hog "Admiral Baconstraps". I was going to send the artist of this picture, Matt E, a nasty reply telling him that he is a dirty racist and I hope he sees the folly of his ways, but then I saw that one of the award categories was for the most racist tapir entry, so I had no choice but to give this one the award. Ironically, this special tapir award is made out of melted down gold fillings taken from Jewish prisoners in WW2. It was either that or carved out of the skulls of Cambodian babies, so please don't judge us too harshly.

Welcome to the jungle indeed.

Never in my life have I been as proud as I am right now. This submission by a VERY talented artist by the name of Henry Pill from Little Rock, Arkansas, has swept the field and took first place. He is going to take home the big prize of $1.34 and a paid scholarship to the Vienna University for gifted artists in Austria*. So what can I say about this extraordinary piece of work that won't sound undeserving and pitiful in description? How would you describe the sun to a blind man? It simply cannot be done. I will let the image speak for itself, for it has already spoken volumes to my heart in a symphony of simplicity and raw beauty. I commend you Henry Pill, you are a true tapir artist, and the winner here today. (*Offer void in Arkansas).

Well that wraps up the awards. For all of you that didn't win a golden tapir, please don't be discouraged. Just because you are a total failure at art, and probably all other areas of your life, that doesn't mean that you should give up. But seriously consider giving up. Have a good weekend gang, and God bless!

Hiya, Dennis "Corin Tucker's Stalker" Farrell here. Fun fact: State Og was named after a 14th century poet named Ooter Otermeyer until the 1930s, when it was learned that his name was not State Og.

We have instituted new ways to save fuel and pass the savings on to you! Our pilots always take the most direct path and never fly in a roundabout way just to avoid things like restricted military no-fly zones. But even more significantly, we’ve reduced the amount of jet fuel to allow our pilots to have to make the Molotov Cocktails they regularly enjoy tossing out of their cockpit windows during flight.