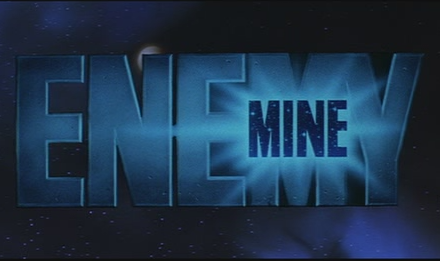 Overview: A headstrong human space pilot (from Earth (the best planet)) crash lands on a remote volcanic world, where he is stranded with his sworn enemy, a lizard-alien guy named Jerry. Together, they put aside their officially sanctioned hatred and join forces to survive a series of harsh adversities, including seasonal affective disorder, Japanese tentacle-rape demons, sudden onset male pregnancy, and uncontrollable beard growth the likes of which makes Tom Hanks in Castaway look like a freshly waxed seal with alopecia.

The Case For: Teaches vital space survival skills, like how to stop a swarm of flaming meteors by building a lean-to out of beetle asses.

The Case Against: Also teaches dangerous lessons about tolerance of alien cultures, which will one day lead to the conquest and enslavement of the human race by vicious space reptiles.

Trying to explain Enemy Mine to a newcomer is kind of like trying to explain the pains of childbirth to a man by describing all the jagged, irregular objects you'd probably have to ram deep, deep inside his urethra for an accurate simulation. It's something that inevitably ends up sounding like one of the worst experiences a person could endure - when, as it turns out, the real thing is actually slightly less painful and horrifying than that, and apparently one of those miracles of life everybody has to see at least once to truly understand the human condition. But you're still reading this, which means either you've already seen the film and are looking for some kind of support group, or you haven't and are already mesmerized by this promised gauntlet of human suffering. Witness the power of Enemy Mine. It has you.

Suffice it to say that this ain't your granddaddy's bad sci-fi movie. Or, if your granddaddy is blind, deaf, criminally insane, and thus every single member of the cast and crew of Enemy Mine, it probably is. Either way, the movie opens, unsurprisingly, in space. As we float through the debris and horribly mutilated remains of frost-burned and exploded human corpses (which may start to look disturbingly familiar by your first bathroom break), Q-Aid explains how it's the distant future, and shockingly enough, humans are at war with yet another intelligent but hideous alien race who decided to be big jerkhole meany-faces about who gets to colonize what first and so on. "Well, they weren't gonna get it without a fight," the voiceover reassures us, just in case you found yourself doubting for even a moment what the sci-fi genre has been hammering home for the past 80 years: that humanity is the undisputed USA of space, and we'll kick your alien asses into oblivion if you so much as exist on a plane detectable to more than one of our sensory organs at a time.

The action starts with a mighty space station which looks like one of those four-sided elastic sticky things that were fun to throw at third-grade teachers. The station is guarding the incredibly important...it's home to the top-secret...well, actually it just seems to be floating around in the middle of nowhere, doing nothing. One way or another, its existence seems to have caused great offense to the alien menace du jour - the Dracs. Fortunately for humanity, this particular station is home to none other than ace hero space pilot Dennis Quaid Will Davidge. The humans and aliens clash in a hurricane of terrible minimalist 80s ambient 'music' and terrible maximalist 80s special effects, the combined effect of which is like being slowly crushed to death by a lovesick manatee while powerful electric shocks are delivered to your heart every twenty seconds. 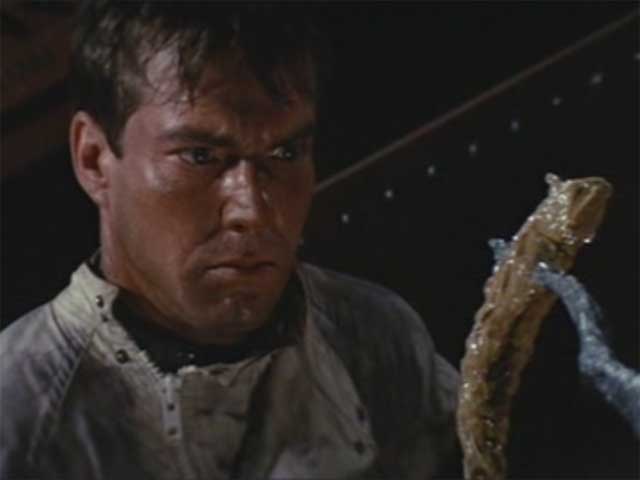 The Drac equivalent of Arby's roast beef.As if the high-octane (or whatever you use to measure the explosiveness of lasers) space battle wasn't enough, the movie showers us with witty radio banter, including one immeasurably blicka-transcending fat girl joke which ends up being totally worth it, if only because it leads to one of the greatest faces ever conceived in the history of acting, courtesy of Dennis Quaid. After finishing his facial gymnastics routine, Q-dog goes into a suicidal set of maneuvers in which he shoots down the alien ship and then crashes into a planet which looks like Mordor for some fucking reason. Oh, and he accidentally kills some other shmuck we know nothing about in the process and buries him in a pile of rocks, which is of course the traditional space-method when rocket-coffins are in short supply.

Sadly, it turns out the alien guy our hero chased down in a blaze of suicidal machismo actually survived, laying out the red carpet for all 90 of the movie's remaining minutes to finish trampling us into the psychological dirt. What's that, Davidge? You've never seen a Drac before? Both male AND female parts, you say? Well, in that case we're hooked. Please, lead us into a mystical forest of permanently dry-iced styrofoam rocks and trees and soundstages made from Land Before Time bedsheets.

Davidge finally stumbles past all the whimsy and over to the other crash site, where he finds his Drac nemesis taking a relaxing bath. Ahh yeah, here it comes. Delicious vengeance, and about time. No, wait, don't drop your gun off of a cliff, he's right there! Well shit, OK, it's alright, shh, we've still got him Davidge, lizard guy's still just right there. Yeah, good, pull out your knife and wait for him to fall asleep, and...wait...no, that doesn't look like anything even remotely recognizable as sleep to us either, valid point. Okay, this is it! That sudden Biblical lightning storm made him feel like swimming a few more laps! Quick, laugh belligerently, run up there, squirt a bunch of gasoline in his general direction, throw a match, then run like hell! It's worked for junior high kids with brown paper bags full of dog shit all these years, which means it's pretty much a proven and trusted method of-

Wait, what? You mean that thing we just saw taking a dip in a volcanic crater full of radioactive green super-acid is actually slightly flame retardant? Who would have thought?