It's over, folks. The Sopranos is finally over.

As those final minutes ticked out there were twists and there were turns, but events seemed to be playing out almost as expected. AJ whined like a new poster on Democratic Undergound, Silvio got his toenails clipped, Phil got whacked, and Paulie was afraid of the evil magic of cats.

The family gathered for dinner at a creepy half-empty New Jersey diner. They had inexplicably called ahead for reservations. The tension began to mount. Every person in the restaurant loomed with suspicious intent. Meadow struggled to parallel park her car. Doom seemed to suffuse each second and it became hard to pay attention to the inane conversation at the table. The implications were obvious: Tony is going to die.

Would it be the guy wearing the USA hat? The black guys? The boy scouts?

The door jingled as someone entered the restaurant. Tony looked up and… 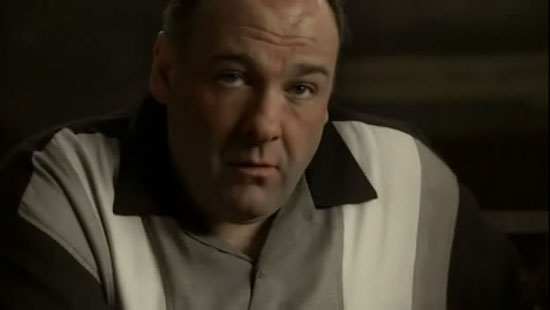 Cries that the cable had gone out went up across America as Chase allowed the final seconds of the episode - of the entire series - to run out silently over a black screen.

It was the one thing no fan or Sopranos expert had predicted, one last memorably strange event to close out the show. With every pet theory in ruins, message boards across the Internet quickly filled up with new theories inflamed with a great deal of outrage. AJ wasn't made a captain and Meadow didn't whack Phil, so just what did that inscrutable bastard David Chase have in mind with his final thumbing of his nose at the audience? Why did he decide to end one of the most beloved shows on television with what amounts to an ellipse? 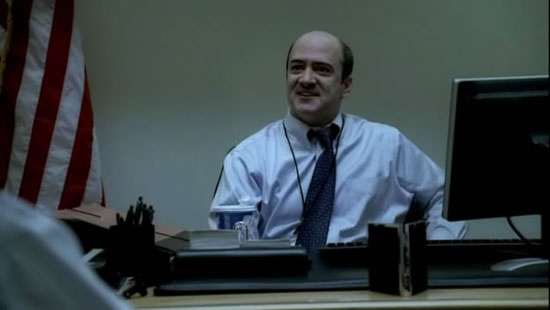 As ever, I found myself turning to the Internet for answers.

Hundreds of disappointed fans poured out their hearts on the HBO forums. There was a small cadre of David Chase defenders, many of them wagging a finger at the naysayers and scolding, "You just don't GET it." This only seemed to further enrage those who felt let down. Threats of HBO cancellations flowed in an unceasing river of disappointment.

HBO forum poster PISSEDOFFSOPRANOFAN registered an account and then his disgust:

I have had HBO for over 20 years
and watched all their shows??/
ONLY really Kepts It for SOPRANOS ??
I have alot crap in my house thats Of this show, spent alot money cause I LOVED THIS SHOW

I can see some of your points about the FADE to BLACk US the Viewers gettng WHAKED But come on??

TO Sit their and call ppl retards and idiots cause you dont agree with their opinon???/

USA 1st Admendment FREEDOM of SPEACH!!!
So we Have right to state our thoughts abut the show

We are Let Down, ALl the HYPE over the LAST YEAR
HBO Knew we all TUNE IN and Watch it..

JUST alot were DISAPOINTED to the Facts we did't Have Closer to last Decade of a Beloved show, money we spent to keep watching it. Yes I Feel I got Whacked at the end and I FELT IT lol

Others were equally disappointed, although less prone to inarticulate rambling. JamesDungy offered up the most concise distillation of fan complaints with his post:

I'd rather have aids and a different ending than that ending

Some just wanted to vent frustration about issues going back to the pilot episode. Poster goombacanadian felt now was a good time to voice his concerns:

You "Italian" Americans are a bunch of jokes. You don't understand ANY Italian and because you use words like "gabagoo" and "canoli"... you call yourself Italian.

The Sopranos are a disgrace to all the Italian immigrants who arrived in North America... And this goes to all the "Italian" actors in The Sopranos... washed with the American flag...

A few felt the meaning of the final scene could be found in the lyrics to Journey's Don't Stop Believin'. 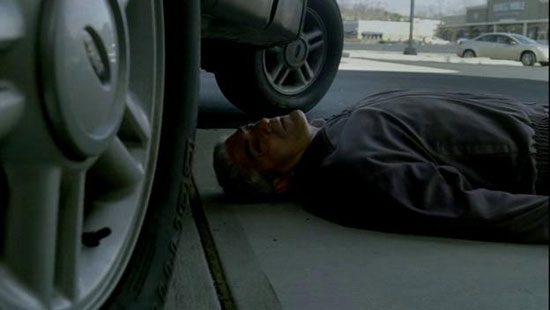 AngelinaDaWhop said it longest with her essay on the subject. You probably don't want to read all of this so just skim it and get a face full of the crazy steam boiling off the top:

the sopranos are NOT over.

When Meadow runs into the diner she will accidentally bump into the guy with No hat and kock the gun from his hand and foil his attempt to take out Tony,
Tony then is able to grab the guy with the dark usa hat while Aj will pick up the gun that meadow knocks out of the guys hand with no hat.
aj will pick it up and first kill the guy with the dark hat That tony grabs and shakes around for an answer
tony will look to aj as thats my boy but completly shocked

aj then shoots the guy with no hat, then aj will turn to the 2 black men and kill them point blank and this will bring aj back to life and out of his depression

then Aj will take over tony position as head. Still waitng until juno dies there is not much they can do the legends are still living.

The guy who point blank shot Phil will become capt under paulie walnuts, so paulie could honor Tonys request in the new business adventure but not die like those before who always wound up dead.

Meadow will become the family successful family lawyer = Aj will run the family as the man but it is known that Carmella will be the first woman in the history of the jersey family to take on the NY side, she will have Aj guided by silvo to first go after phils clan for going overboard.

Then the church then will get involved in Carmella way to correct the blood money by using the good of the money to help the church with a new program for young kids with depression.

she does this after realizing she IS pregnant and its a boy she will name him after Tony why because Tony will go to jail when the feds dont honor their agreement for giving Tony immunity for turning in the terrorist (tony gave up the money trail.)

paulie walnuts will close bada bing and start working the new business with his solider from the streets of NY's little Italy and that's where the story begins to break of the days before tony soprano. New things are revealed to answer questions that will lead up to a movie about the sopranos.

The Movie will take in trillions of dollars and they will bring back the series in a whole new light, where silvo becomes AJ's under boss and guides Aj into taking on the NY family.

Aj learns to go up against families like goti and gianvanti and the sopranos live on with Tony working his side from fed prison until the day he gets out for foiled investigation. Then they will begin to revert back to the story line when Tony was growing up.and father soprano and the North jersey uncle days
Sopranos will live on

the black out is only the beginning - because the darkness is always followed by the light. Don't stop believing - it goes on an on an on an on

It wasn't long before a number of theories on the ending and its potential aftermath began to roll in.