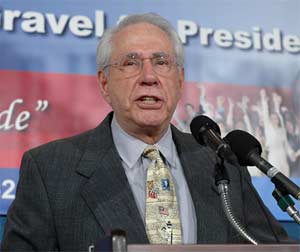 This week the eight presidential candidates running for the Democratic Party nomination gathered to debate their worth as human beings, an act that is generally pretty futile for politicians. After seven years of disastrous Republican leadership, it fell on them to inspire us with bold new alternatives and a great message for the future. As you might expect, they bickered over their minor differences, and each promised to fix a dramatic number of problems in a completely unrealistic amount of time with very little in the way of resources. The only one who seemed honest about these implausible claims was Mike Gravel, somebody's Awesome Grandpa, fiery and eager as Hades to box the ears off these young whippersnappers. His grizzled "don't believe them" stance was refreshing, and just the kind of no hope message we need to unite us in these dark times.
Sadly, Gravel is an underdog in the way a dog encased in cement and sunk to the bottom of the Marianas Trench is an underdog. His chances are astronomically small, but he is nonetheless one of the most entertaining figures to emerge from this election cycle. I hope to see him grumble more, because it is extremely refreshing in a way. Naturally the other candidates barely even notice him, so when he accuses them of being full of shit, they just politely smile at the old man as they have been taught to do by our society. Imagine Gravel in any presidential situation and if you don't immediately smile and laugh, then I am afraid you are dead inside.

Last night the Republican candidates debated as well. I have not yet had a chance to watch in full, but I can only assume it was as magical as the Democratic debates, just with more sinister mustache twirling, diabolical cackling, and discussions on the best way to start World War III. I will thus not comment on it suffice to say that District Attorney Arthur Branch failed to appear, making the whole thing anything but a slam dunk. No, I will just focus on the recent Democratic debate, aired on CNN and taught by substitute teacher Wolf Blitzer. Besides, I'm biased. After eight years of Republicans messing things up, I'd like the other side to get a chance to break the country. 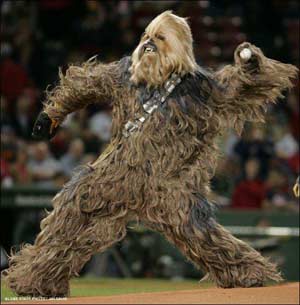 The flaws in this debate format were massive and glaring, like making a sandwich and then realizing that you forgot the bread and basically just spread a bunch of condiments all over your lap. The formal presidential debates to come will hopefully be much smoother and more practical, but that doesn't mean we can't complain about the bumpy road there, or the fact that we're riding there in a clown car with no AC and the radio is broken along with all the window cranks. I realize there's not much you can do with eight or more candidates at once, but this all seems rather silly. With any luck half of them will get stung by killer bees in the next few days to simplify the process considerably.

The format boiled down to candidates vigorously holding their hands up in desperate hope that Wolf Blitzer would call on them. I know that George W. Bush set the bar low for presidents, but do we have to start treating all potential presidents as children? We've taken some of the most complicated issues of the modern world and reduced them to "raise your hand if you ___." Maybe in another decade we can replace elections with rock, paper, scissors.

There is also the minor issue of the debate seeming utterly pointless. There were no real insights given, and no disastrous meltdowns. The format seemingly eliminated any sort of real debate, and instead encouraged candidates to blurt out as many promises as humanly possible in 60 seconds or less without explaining how said promises will be achieved. Where other candidates made bold, hopeful promises for a better tomorrow, Mike Gravel employed a delightfully realistic strategy, which was to take hope in the palm of his hand and squeeze until its blood and guts squirted out from between his fingers and dripped down to the floor. I was always excited when he'd get his 20 seconds to speak once each hour.


From plucky Dennis Kucinich standing on his apple crate to appear taller, to John Edwards smiling his saintly smile, it was like a rerun of the last presidential elections in some ways. That's not to say it was all the same, though. In addition to the Gravel, organizers allowed a black man and a lady robot to debate, and that helped spruce up this old political lumberyard with some fresh timber. 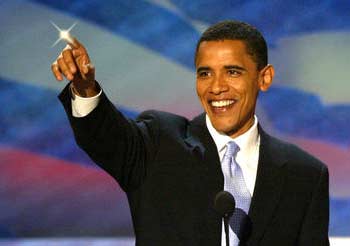 Barack Obama, The Chosen One sent to us from a land beyond to lead us out of the darkness, seemed lost, stuttering and not delivering his usual charismatic performance as a miniature version of The Rock. With each stutter, the light of salvation seemed to dim just a little more. Hilary Clinton was hailed as a winner by many, but I made certain to grumble and shake my fist whenever she appeared on screen so as not to hear whatever she was yammering on about. It's great to see diversity and all, but she's more of an old rich white man than most of us will ever be. When her jackbooted thugs smash your door down and uninstall Grant Theft Auto from your PC Personal Computer, don't say I didn't warn you.

I have certainly complained about this debate, but that is not to say that I don't have ideas on how to improve it. If you are planning on organizing your own presidential candidate debate, feel free to borrow any of my suggestions below:

If I learned one thing from the debate, it's that American politics are still as embarrassing as ever. We're the greatest nation in the world and we're still a disaster when it comes to electing worthwhile figures. Lucky for us, we're all getting dumber, so when Hilary or whichever Republican gets elected to what's left of the Whitehouse, we probably won't even notice.