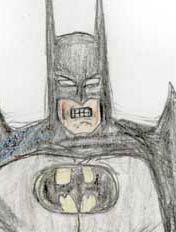 MY FACE IS SO VERY ANGRY AT YOU ALL!!!One of the things that probably comes through very clear in my writing is that I'm a huge nerd, particularly a comic nerd. I have been such a creature since my youthful days, which I non-voluntarily spent as a child. I think the comic book is a fantastic medium that allows for a wealth of intelligent, interesting, and downright entertaining stories to be told far beyond the stereotypical "Superman beats up alien" or "Spider-Man gets molested by his cloned uncle's local bike shop owner" nonsense the industry is known for. In my early years, around the time I went into a cocoon and underwent metamorphosis into a horrendous looking teenager, I dreamed of being a comic book artist. Back then my capacity for story was shallow enough to consider the plot to an id Software game a work of moving fiction, so when I read comic books I didn't see much beyond the art. To make matters worse, my youthful ideal of quality art was incredibly lacking, if not fairly abysmal.

I tell you this because in honor of the recent trend of passing childhood art off as Internet comedy, I am going to attempt to pass my childhood art off as Internet comedy. Unfortunately I no longer have any of the drawings I made when I was a wee lad, but I do still have an embarrassing stack of drawings I made when I was in the age 12-13 demographic. That was when I made my initial foray into comic collecting. When I first purchased a comic, I knew then and there I would become a comic book artist. That dream lasted until it was replaced with "becoming a web designer." My dreams for the future have now atrophied to simply "keeping the noose at bay."

As an aspiring comic artist, I was drawing influence from an anatomically incorrect fountain of disproportionate stupidity. My favorite artist of the day was one Rob Liefeld, who is still well known in this modern millennium. For those of you not familiar with Rob Liefeld, he is sort of like the Derek Smart or John Romero of the comic book industry. When Liefeld draws a comic, you can rest assured that it will be a moving, kinetic work from cover to cover. This is partly because Liefeld cannot maintain any sort of consistency whatsoever, even between panels on the same page. Having background details randomly change between panels set in the same location is hardly an issue when you take into account how he draws the human form. Even by exaggerated comic book standards, Rob treats human anatomy and perspective in ways M.C. Escher was never cruel enough to consider. He can barely manage to align eyeballs across a face, let alone draw limbs to their natural conclusions. All the characters he draws are packed so tight they look they are either going to go supernova at any moment or tip over due to a lack of feet and ankles. I think his work can best be summed up in this hyperlinked picture of Captain America, seen just after some asymmetrical breast implant surgery. Don't take my word for it. Some simple research on the Internet will show you just how bad an artist he is, and how he manages to draw female anatomy far, far worse than male anatomy. Making fun of Liefeld is cliché at this point, so lets move on.

Yes, in retrospect, patterning myself after a guy who thinks Captain America has bigger breasts than an estrogen-fueled tank was probably an ill-conceived idea at best. But I was a dumb kid attracted to flashy art and apparently men with big muscles and guns. That's pretty much what comics in the 90s were all about, though. I'm not sure why, and I don't really want to know. Anyway, what follows now is my analysis of a handful of drawings I made in 1994 and 1995, shortly before my dream died and I began the downward spiral that continues here each and every week.

Finally, to prove I've still got it, I humbly submit this character I drew late last year. I think I may still have a shot at my childhood dream!

And with that we're done looking at my terrible teenage artwork! Given the huge stack I have of bad drawings from 1994-1995, in addition to all the ones I lost over the years prior, I think it's safe to say I really wasted a good chunk of my childhood. On the plus side, I can always cease all further development and regress to a childlike state to reclaim those lost years. That should work out nicely.