George Lucas recently claimed to have written 50 hours worth of content for a live-action Star Wars television show. In a perfect world he would have written half as much and surrounded himself with twice as many people that were willing to say no to his bad ideas.

Still, I admit that I still hold a small amount of hope. While the quality of the original trilogy seems to have been the result of limitations that no longer hold Lucas' worst instincts back, the universe still retains a tremendous amount of potential.

Could a live action show tap into that and turn this fallen franchise around? The answer lies with the leaked plot outlines for each proposed 2 hour episode. 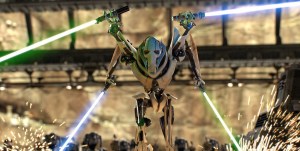 Hours 1 + 2
This is titled Episode LI, which will totally freak people out. Episode 51? There are 50 prequels planned? Holy cow, I'm a genius! It's like the original trilogy. To continue the theme, at least three characters say "I've got a bad feeling about this." Just a little nod to the real fans out there. A clever reference, if you will.

Hours 3 + 4
There's a bad Jedi with like eighteen arms AND EACH ONE HAS A LIGHTSABER. The camera gets super close and moves all over the place while all those sabers whoosh around. There are plenty of quick cuts to different shots of random movements, which emphasizes the action. A coconut falls on the head of a Yoda alien and he dies. His blue ghost immediately appears and also gets hit by a coconut, then dies.

Hours 5 + 6
Comic relief episode. A droid screams as he zips by, leaking oil that another droid slips on. A guy gets knocked off a ledge and does the Wilhelm Scream as he falls to his death. Someone simultaneously farts and gets hit in the spaceballs.

Hours 7 + 8
Senatorial episode. Tense, thrilling debates about trade embargos, economic infrastructure, taxation, and interplanetary relations. A Wookiee gets serious burns over 95% of his body in a horrific industrial accident.

Hours 9 + 10
Love story. There is a couple in love and everything they say is super romantic. A little girl's hand gets chopped off.

Hours 11 + 12
HUGE SPACE WAR! Tons of ships shooting at each other in space. Lots of explosions, but only droids and clones die. The episode ends when the protagonist barely squeezes through a tight space and blasts something important as his ship is in danger of blowing up. A tauntaun attempts to pilot a fighter, and humorously rears its head as its craft disintegrates against the hull of a much larger ship.

Hours 13 + 14
Jedi council meeting. One Jedi manipulates everyone else into doing what he wants while seeming very innocent. This is FORESHADOWING. Turns out he's a bad guy.

Hours 15 + 16
There is a new Death Star and it's like five times as big as the original. A thousand simultaneous Wilhelm Screams overlap one another comically as the Death Star is blown up.

Hours 17 + 18
The Han Solo replacement character has to get braces. All his friends laugh at his misfortune, but the braces come in handy when he gets thrown into a Sarlacc pit.

Hours 19 + 20
Find out what everyone loves about that Mad Men show and recreate it in Star Wars. A nerf herder dies of old age, alone with no one to remember his insignificant life.

Hours 21 + 22
The senate episode added lots of depth, but you can never have too much. This time around we follow a protocol droid as he reads holo-news articles about every conflict, major event, and political party in the galaxy. The droid is proper, which makes it funny when he says "Oh my". 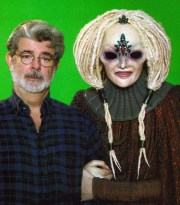 Hours 23 + 24
Pod Racing went over pretty well, so this entire hour will follow in its footsteps. A thrilling glimpse into the wildly popular sport of Hutt mixed martial arts. A screaming fan chokes on a gross-looking snack of fried space bugs, his already large eyes cartoonishly bulging during his hilarious last gasp.

Hours 25 + 26
Ewok-centric episode exploring their first foray into space using nothing but logs, rope, and boulders. At the end, the galaxy lies in ruins. A triumphant roar of "Yub Yub!" echoes through the vacuum of space.

Hours 27 + 28
Introducing the main bad guy: Darth Evilous. He's way cooler than Vader and Maul put together because he always looks really mad and his eyes are red.

Hours 29 + 30
Gigantic land battle, with a million Jedi and a billion droids. There's so much happening all over the place that it's impossible to figure out who's who or pay attention to any narrative. In other words, it's awesome.

Hours 31 + 32
American Idol parody in a cantina. There will be around thirty musical sequences, each judged by a panel of judges including Paula and Simon only they are aliens. A wolfman discovers he has cancer.

Hours 33 + 34
A relative of Jar Jar wanders around a field full of rakes for two hours. Each time he steps on one of the rakes he gets hit in the face comically, and he says something funny like "Woah!" as little stars twirl around his head. The episode ends with him becoming a pope.

Hours 35 + 36
Introducing a new best Jedi, Jedi Joe. He is patriotic and cuts through swaths of sand people. This is a subtle allegory, you see, a reference to the actual events in real life on that fateful day that I sat down to watch a G.I. Joe cartoon.

Hours 37 + 38
An evil Mon Calamari admiral creates a clever ploy to kill a group of Jedi, but at the last moment he gives away his own plan by impulsively shouting the catchphrase we all know, "NOOOOOOO!"

Hours 39 + 40
A male Wookiee has accidentally agreed to date two females on the same night. In this madcap episode, the Wookiee groans in exasperation as he travels back and forth between the dates, trying his best not to mix up his costumes or the details of each female. Guest starring Guy Fieri.

Hours 43 + 44
Darth Evilous and Jedi Joe engage in a prolonged lightsaber battle. As the fight reaches its climax, Evilous stuns Joe when he reveals a shocking secret: He is actually Jedi Joe's childhood friend Bobby Evilous.

Hours 45 + 46
As the forces of several trade fleets, government agencies, police forces, militaries and militias close in on one another, members of each faction attempt to explain the conflict to their compatriots. A rancor slips on a banana peel and shatters its pelvis.

Hours 47 + 48
The forces meet in the biggest space, land, and sea battle of all time. The entire two hours are dedicated to showing random character that you don't know getting blown up while a good Jedi and a bad Jedi talk in a large room overlooking the war. A Twi'lek dancer takes a blaster shot to the stomach, then turns to the camera and shrugs as if to say "Why am I even here?"

Hours 49 + 50
Just as the battle seems lost, R2D2 arrives with a trillion other R2D2s. They push all of the buttons and thwart all of the bad guys while shrieking and whistling, turning the tide of the engagement. The blue glowy ghosts of Yoda, Obi-Wan, Darth Vader (original and new trilogy), Luke Skywalker, and Boba Fett arrive, giving everyone a thumbs up as the music swells.