Now You're (Not) Playing With Power! 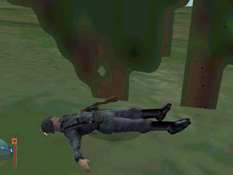 A shot from World War II Online. The graphic style, if I'm not mistaken, is what's known as "shitty."

As rabid gamers across the globe are undoubtedly aware of, Cornered Rat Studios has recently begun shipping their massively multiplayerly onlinely action title, World War II Online. The game allows players to faithfully engage in some of the most realistic World War II action that anybody's ever seen, short of watching The History Channel or listening to your 80 year old grandfather drone on and on about how he shot down 30 Jap blimps with a bicycle-mounted mortar in the middle of Gang Toi, right before the airstrikes came in and dropped napalm on the horrible Space Zombie Grubs that were molesting his platoon. For example, World War II Online promises to offer such utterly fantastical features as:

Walking through cities which are surrounded by very large fields

Naturally, gamers were tremendously excited to purchase such an action-packed and incredible new game which would ship with absolutely no bugs and be completely playable right out of the box. I mean, it's not like publishers rush their products out the door so they cut down on development time and pull in more profits. That is a silly notion which will land you a one-stop trip to the gulag if you even suggest it! However, fans of World War II Online were shocked to realize that the game they had ordered did not quite arrive as promised. In fact, the game shipped with a few minor "flaws" that consisted of the following:

The player can't fire his weapon

The player can't use any vehicles

The player can't determine their gender

Walking causes the game to crash

Not walking causes the game to crash

The game crashing causes the game to crash

Nothing works at all

Game box shipped with used condom instead of CD 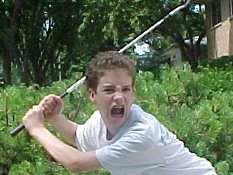 One of the many rabid gamers infuriated by WWIIO's shoddy release.

Like any God-fearing plowhorse of a company, Cornered Rat was quick to blame the routers, servers, Internet connections, phase of the moon, metric system, Frankenstein, and secondhand smoke for their problems. Naturally they didn't blame the game itself, because the mere idea that they would ship their product before it was 100% ready is completely ridiculous and unbelievable. Cornered Rat attempted to fix these problems by offering a 70-fucking-meg patch on THE SAME DAY OF THE GAME'S RELEASE, a file which I assume is composed solely of "bonus" features such as "code which allows the game to run." Their forums have already split the public into two rival factions: the group of people who are pissed because they bought a product that does not function correctly, and the group of people who likes throwing their parents' cash into an incinerator every chance they get. Each side has excellent arguments, as presented in the following posts:

Thank God! I hope to God you are taking this game back to the store. We don't need poser WWIIOL fans like you complaining all the time. So when I am playing this kickass game a week from now when all the bugs are worked out, I will think of you and laugh my ass off.

The usual empty threats of lawsuits and physical violence that follow every title's half-assed release are of course floating around everywhere, backed up by people who have more numbers than letters in their user names. Basically, the whole situation is a giant mess. The game doesn't run. The servers don't run. People are pissed off and sending truckloads full of angry ICQ messages to each other, often mentioning such popular words as "fag" and "dick." So what happened? What went wrong? Who's to blame? The answer is obvious:

Remember good ol' Powerplay? The mysterious piece of magic alien astronaut wizard ghost technology which would somehow give shitty eight-year old 1200 baud modems the power of a corporate T1? The technology so ultra top secret that nobody could even vaguely explain what it was or how the hell it worked? I of course repeatedly featured in-depth analyses on this topic, all of which revolved around me cursing and using the word "ass" where it wasn't necessary, while all the so-called "gaming news" sites continued to suck up and mindlessly devour every word good ol' Gabe fed them. Now, over a year later, Powerplay is gone... nothing left but a drunken schematic on a soiled bar napkin. I think it's clear that the much-touted Powerplay technology, or lack thereof, is obviously to blame for World War II Online's horrible release. Think about it: the so-called "engineers" working on Powerplay continuously babbled on and on about how wonderful it would make our lives. Powerplay will increase modem speeds by 540493900%! Powerplay will eliminate lag! Powerplay will watch your children when you go out of town! Powerplay will solve the mystery of the haunted amusement park! Order 10 summer sausages and receive a free box of Powerplay! Powerplay, Powerplay, Powerplay! It soon became clear that Powerplay would turn Earth into a virtual paradise, improving nearly every aspect of our dull and meaningless lives. As proof, just look at this highly scientific chart I found on the Internet while doing a search for "MUPPET+php+DOMINATRIX":

As you can plainly see, the longer Powerplay fails to be developed, the greater number of bug-free games are released. You can't pull a game out of its box these days without having to spend nine hours downloading a patch to fix "corrupted C++ registry loading texture compression C database gross negligence C-- bugs." The newest title to show off this painful need for Powerplay's release is of course World War II Online, which is currently keeping hundreds of 14-year olds from joining a server and typing in-game messages complaining about camping. Gabe Newell, if you're reading this, and I know you're not, please finish Powerplay for the sake of the kids. Temporarily suspend your plans for the 500th consecutive "official" retail mod for Half Life and wedge your ass back into the engineering room. If that proves to be impossible, at least launch a few thousand pointless press releases and interviews. I just need to get my fix of standing in the middle of a gigantic field and trying to figure out the cryptic combination of 16 different buttons I need to mash so my soldier will aim his gun.

Bob James, one of the two crusading Catholics on Something Awful, has gotten a ton of exciting and supportive email for his religious comic, "The Sin of the Americas!" In today's column, Bob responds to some of the more Satan-influenced reader email.

This is the worst insult one can possibly receive! Calling me, a true Christian, a Catholic! And the nerve to laugh like a fool, especially at the top secret Vatican-run homosexual breeding chambers, where homosexuals are cloned and sent out into the world to turn our children into gay atheist catholic Satan-worshipping pedophiles! I'll pray for your salvation, as any good Christian must, but I won't fold my hands while doing it!

That's a lotta Jesus! Head on over and pray for your soul! Pray for mine while you're at it.