Much like the housing boom, my giddiness over human suffering wasn't meant to last. Unlike most people I actually read to the end of the article.

But in Tent City, at least, he is in a minority - few are here as a direct result of the housing crash.

However, Mike Dunlap, who runs a volunteer group providing supplies to Tent City's dwellers, thinks that could change.

So because they were able to talk to one guy who lives in Tent City, U.S.A. because he lost his home and some volunteer thinks more people like him are coming to Tent City, BBC has been able to make the giant leap that this homeless haven is a reflection of the U.S. mortgage crisis. If only their comedy was as funny as their journalism!

No, it turns out that Ontario's Tent City population consists of the same run-of-the-mill homeless people you see in everyday life. Other articles about Tent City, American articles, don't even mention the housing crisis. Hey BBC, you got me all excited for nothing! This article is like those articles claiming that Second Life is this massive social revolution when in reality it's just a hangout for Internet recluses with quirky fetishes like infantalism, furry fandom, and pedophilia. 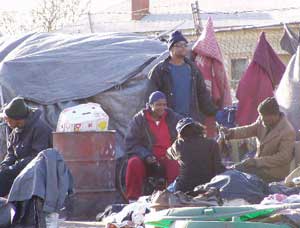 But thanks to this BBC article a bunch of British whatever-the-equivalent-of-rednecks-are will think America is on the verge of chaos, its citizens living in makeshift Hoovervilles reminiscent of the Great Depression. Someone dig up Dorothea Lange. She's needed in Ontario, CA!

I can see what's really going on. This is all a ploy for the BBC to paint the United States as a country full of idiotic savages and drum up support for Britain to make their move and finally reclaim the thirteen original colonies and the country. Listen, 232 years sounds like a good run, but we all knew this nonsense wasn't going to last forever. We had our fun but it's time to admit, considering the state of the economy, the price of gasoline, the mess we've created overseas, and the apparent lack of control we have over the direction of our very own lives, we have no goddamn clue what we're doing.

Better start practicing that loyalty oath to the queen. As a guy who writes articles on the Internet the best I can hope for is a royal job fetching the queen mum's tea in the morning. I've been practicing and I'll be ever so good!

So as a guy who once got a B in a remedial level economics course I can confidently predict that the sorry state of the American economy will lead to a takeover of the country by Great Britain and the United States of America will cease to exist. And if I'm wrong may I shamelessly backpedal and deny I ever made those statements.

At least then, you could never accuse me of being unAmerican.