You former homeowners who berated us for renting deserve everything that comes to you. It turns out you couldn't afford that three bedroom house with a pool in the suburbs. It turns out you were living well beyond your means. And it turns out that you're a bunch of imbeciles who didn't understand what your mortgage contract really meant. This article has me laughing all the way to the bank, the comeuppance bank! 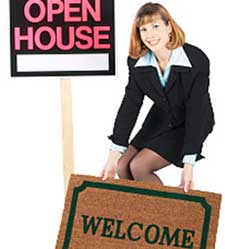 I'll buy a house I can't afford from you any day, cutie!Here's some more from the BBC article, because the more I quote the less I have to write.

But one man, who did not give his name, said he and his family were living in Tent City because they were victims of America's foreclosure crisis. It came down to "feeding my family or keeping the house", he said, "so I got rid of the house".

The property he lost is nearby in Ontario, which, in places, offers a middle-class suburban dream - green lawns, wide pavements, garages big enough for two cars.

The people who had their houses foreclosed on are no more victims than people who deliberately trip and fall at a grocery and then try to sue the store. These people's mortgage negotiations were the equivalent of buying speakers off the back of a truck. They knowingly took deals they knew they couldn't afford and didn't have the good sense to actually read what they were agreeing to.

I mean, these are the same people who thought they got a good deal on a mortgage because the real estate agent's office had a bowl of free Skittles theirs for the taking. They also received a $50 gift certificate to Starbucks when the deal was finalized. An adjustable rate mortgage, free candy AND a month's supply of frappuccino? How can I go wrong?! Surely if my rate were to ever increase it would be offset by last year's generous coffee savings! 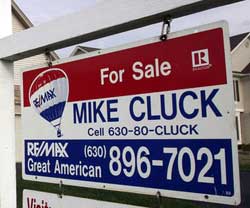 Lesson learned: Never buy real estate from a guy named Cluck.Oh, but honey we'll finally be able to get a dog because we'll have a backyard big enough for him to roam around in and we'll build that deck with a jacuzzi we've always wanted and we won't have to live in an apartment anymore next to smelly neighbors from India. Oh, it'll be an American dream come true!

The American dream is about two cars in every garage, a chicken in every pot, and having a bunch of worthless stuff you can't afford. Americans might actually have to, holy crap, live within their means. They might even have to take the bus a few times a month, move back in next door to Mexicans they fled to the suburbs to escape from, and cut back on those mocha caramel soy lattes hold the whip cream half milk venti and some other gay phrase you hear when you find yourself in a Starbucks. My heart is going out to these victims.