Things Used To Be So Much Better

It seems to me that things just aren't the same as they used to be. Where did the good things go? Why is everything so scary and weird? It was all so much better before.

Go to New York City and look at the world-famous Things Meter. See how the massive neon needle is pointing to "Worse"? I remember looking at the Things Meter before, when things were better, and seeing that very same needle pointing to "Better".

Back in the good days, you could wake up and find your morning newspaper right there on your front porch, soggy and clumped, wrapped around a complimentary morning pickle. Things were definitely better then. Now if you want a pickle in your paper you've got to go out and buy the two separately. You actually have to combine the two things yourself. It's just not the same. 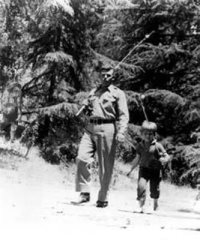 All I hear about lately is movies and video games. Battleship this, Battleship: The Video Game that. Call me old fashioned, but I yearn for the simpler times before these flash-in-the-pan fads came along. In those days you could get all your entertainment by sitting in your back yard and looking up into the night sky. Way up there you'd see two frightened old men strapped into rocketchairs, ramming into one another until one fell hundreds of feet to the earth. I still remember the wild-eyed way they shook their heads, as if to deny that they were helpless in those remote-controlled and remarkably flimsy contraptions piloted by corporate-sponsored hotshots on the ground.

Nowadays there's a whole lot of people standing their ground by shooting holes in other folks. A drunk college student stumbles through your unlocked back door thinking she found her way back to the party, she gets shot. A pizza delivery dude gives you sass about a bad tip, he gets shot. Probably gets shot before he gets to the front door if he's foreign-looking or if he makes an aggressive move such as walking toward the house while you mumble about feeling threatened. It's almost as if easy access to a thing that can end a human life makes the "handling confrontations like an adult human" process seem way more difficult than jumping straight into a reenactment of the ED-209 scene from Robocop.

You never hear about ancient magical relics any more. Not a peep. Back when things were better they were all over the place. Shrines, otherworldly sculptures, lost civilizations' priceless ceramic mugs with inscriptions that read "We're A Thriving Nation And Always Will Be" and "We're Sure At The Top Of Our Game". Each and every relic would grant a wish if you simply came into contact with it. There were so many of these things sticking out of the ground back then that you couldn't go anywhere without gashing your feet to shreds. No one ever got a chance to wish for anything but their wounds to heal. It was pretty great.

Even dreams have been terrible lately. Gee, I'm flying. Oh boy, now I'm in a Dungeons & Dragons amusement park and all the workers are people I know. Please. These dreams are so dang boring that they make me fall asleep.

Back when things were better, the dreams were universally AMAZING. One time I dreamt that my dog had been waiting for me to nod off so he could eat my face. Like, in the dream I was sure that he was really going to eat my face in real life. Well guess what? When I woke up there was a task force in my house and a gas grenade went off and when everything cleared they were putting handcuffs on my dog. It turned out that he had impersonated a federal agent to get some free coffee at a diner up the street.

Now that I think about it, I can't even remember the last time a saw a good dog arrest. Used to happen all the time. Could there be any clearer sign that we're heading in the wrong direction?