One of the more interesting things about the Internet is that it acts as an echo chamber for particularly esoteric interests. You might be the only guy on your block who likes jerking off to images of ladygoats (half-lady, half-goat OR female goats), but statistically there are enough people who have Internet connections and also like this kind of thing to start a message board or two. And, as the old adage goes, what works for pornography works for music.

This manifests itself in different ways. For one, the road from "Internet sensation" to "playing on Jimmy Fallon" has gotten a lot shorter. On the other hand, so has the road from "your little brother's joke band that practices twice in the garage" to "touring group that plays video-game conventions." I'm talking, of course, about nerdcore and nerd-rock and all that bullshit that I'm not even going to bother giving any more genre names because it's pointless. 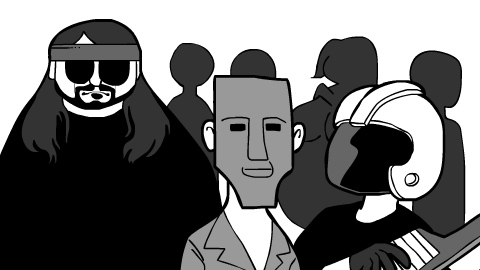 In case you've spent the past few years venturing outside regularly and somehow missed this whole thing, I'll give you a brief rundown. Lately, there's been an influx of bands I'm hesitant to call popular, but who certainly have a "following," whose lyrical or musical content centers on traditionally "nerdy" things like video games or tech jobs or The Settlers of Catan (I originally intended that last part as a joke, but then I spent a little bit of time on Google and found this.) I know what you're thinking. You're thinking music is a lot of things, but mostly it's not about the banal things we do every day. Ideally, you're right. Unfortunately for everyone who is capable of liking things not directly related to their perceived identity as a person, that's apparently not always true at all.

That's my biggest contention with the genre on the whole: It doesn't serve the music, it serves this outside idea of an all-encompassing nerd-dom. Take, for example, The Protomen, a band that -- and I am entirely serious -- has thus far written two concept albums that take place in and tell the story of the Mega Man universe. This is literally the only thing that makes The Protomen notable. The music is neither particularly good nor especially terrible, but it really doesn't matter. What matters is the subject - that's what draws people in, that's why they wear Mega Man helmets during performances.

When an artist adapts a form of media into another form, they have one chief responsibility - to use that new form in a way that portrays the subject matter in a different, but still appropriate, light. Someone who instead simply aligns himself with something already profitable for attention without anything new to add to the mix is called a hack. Or a Star Wars novelist.

I don't want to single out The Protomen, though. Not because they're not terrible, but because there's a lot more terrible to get into. For example, video game cover bands, who are notable because they're actually a fucking step below The Protomen. Bands like The Advantage (which is composed of members of perfectly respectable bands) take early video game soundtracks and figure out how to play them on guitar and bass and add some drums. Sometimes they add solos, I guess. That's it. That's all they do. They don't really write anything, which would be fine if people would stop acting like there was anything notable about hearing something written on one instrument and thinking "Well I could play this same thing, but on a different instrument," and then doing it. It's as if they're saying "Just in case you were terribly uncomfortable at the show, with all these people, we'll remind you of sitting in front of the TV playing Castlevania. We'll just do our best to recreate that experience, right here." It's a tribute band, but instead of Led Zeppelin, it's to a console and a television. 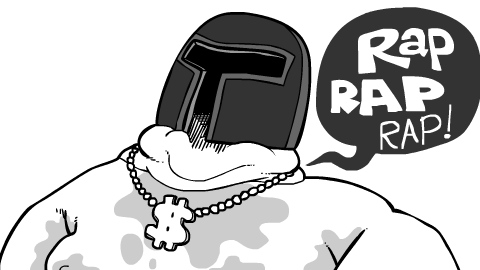 This brings us to my least favorite little subsection of "nerd music," nerdcore. While bands like The Protomen and The Advantage are mostly just stupid and unoriginal, nerdcore starts to really toe that line of "fucking offensive." That might sound like a harsh way to describe dudes who rap about shit they like, I guess, but it's all about the perspective. I certainly don't think these guys are intending to be offensive, for sure, but their ignorance on why it might be considered offensive speaks pretty loudly, too. I get the gag - "When you write a RAP song about VIDEO GAMES, it's a joke! Cuz video games aren't HARD or GANGSTA at all! It's a joke on the nerds!" Sure, that's half true. But the whole thing's a joke; it's as much about mocking rap as it is about skewering nerds. And while it's okay for nerds to be a little self-deprecating, it's quite another to drag another culture into it, especially when the punchline is "We're not like them at all!"

Nerdcore is kinda like that pudgy guy who wore the beanie all the time to hide his receding hairline covering "Back That Azz Up" on acoustic guitar. It's a one-trick pony, an obvious, cheap joke that treats its subject matter as so one-dimensional that all you need to do is put a generic acoustic song behind it to make it good. But it's the reverse of that. Instead of making it "better" by keeping the lyrics and changing the tone, you keep the tone, but change the lyrics to something that's hilariously not hip-hop! Like the groups I listed before, it's lazy. This time, though, the laziness comes at the expense of a genre of music that's struggled to be taken seriously since its inception.