People often ask me for advice on life, and I often tell them that I am not a valid source of knowledge and that they should go climb into an unmarked barrel. I tell them this because I am greedy and I like to hoard my secrets to success, keeping them safe within my meaty bowels. This week, however, I have had a change of heart. Although largely due to the failed triple bypass and subsequent baboon heart replacement surgery, I now understand that time is very short, perhaps only a couple feet tall at the most. Because of this grave realization, I am now prepared to open my vault of secrets to you, the horrifying monstrosity reading this equally monstrous website.

What follows are a small collection of tips and tricks that you may use to get ahead in life, to succeed, and to achieve victory where you have previously been failing with great success. Should these tips benefit you, I only ask that you pay things forward and send me a small check for at least 10% of your annual income. Failing that, I could use a haircut and I have a very strong premonition that you own scissors.

A good way to get to outer space is to lie about being an astronaut on your résumé or by boarding a space shuttle in a rented astronaut costume just before the launch countdown is initiated.

You can ripen any kind of fruit by putting it in the microwave for 20-30 seconds.

Certain types of frogs, when shaken, will increase the likelihood of rain showers by 15%. The trick is to determine the right kind of frog so as not to shake an innocent frog in vain.

If you cannot afford to take your children to the zoo, drugging them and taking them to a pet store can be just as exciting. If you don't have any children, a wide range of sizes, shapes, colors, and genders are usually available to pick from in nearby parks and playgrounds.

Real goals and aspirations as well as friendship and love can often be substituted by a wholly imaginary façade called the Internet.

The best way to train a horse is to dangle a carrot in front of it to spark forward movement. The best way to get a carrot is to buy one at a store using a stolen credit card. Also you should probably steal the horse as well.

The greatest gift in life is not the laughter of a child, bur rather his or her sweet, sweet bone marrow and vital organs. The sooner you realize this the easier things will be come harvest season.

Most car problems go away or are less noticeable when you drive drunk.

When interviewing for a job, the best way to take control of the situation is to force the interviewer to go on the defensive. Start by calling him or her a racist. After that, accuse them of molesting you when you were a child. They will most likely be shamed into giving you a job.

If you are stuck on a wayward hot air balloon and drifting towards an active volcano, the best possible outcome is for you to get a cell phone call letting you know you just won the lottery. Be sure to enter the lottery often.

Picking up hitchhikers should only be done when the hitchhiker is not clad in a black cloak and carrying a scythe.

You can clear any cave of bats by either killing the bat leader with a sacred arrow blessed by an Indian chief, or by playing the movie "Bringing Down the House" outside the cave, which causes bats to go insane by overwhelming their senses. In either case peaceful negotiations should be attempted beforehand.

If you are a zookeeper you can earn extra money on the side by taking animals home with you on weekends and renting them out for birthday parties. Note: this does not apply to beekeepers for obvious reasons (and to avoid "it's your bee-day" puns).

When going out for a late night walk it is important to make sure that you have not mistakenly packed a slide whistle in place of your rape whistle. Such a mistake would only make a bad situation even worse.

When appearing in court before a judge, it is generally not a good idea to wear a shirt with a picture of an anime character on it. Wearing a black judge's robe will earn you far more style points, as the judge is sure to note your sensible taste in clothes.

If you enter a cursed mummy's tomb, chances are you will die in a freak automobile accident within seven days. If, however, you attempt to circumvent the mummy's curse by avoiding cars, you're likely to get electrocuted. The only surefire way to survive the mummy's curse is to enter a completely different cursed mummy's tomb so that the two curses cancel each other out.

If you have overdue library books, the best course of action is to hide them in your crawlspace and pray to god nobody ever finds out.

The Ark of the Covenant is an important religious relic and should not be used to store beer at frat parties. 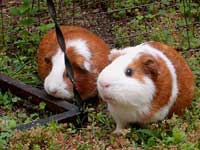 You can get out of any speeding ticket by not stopping for the police officer and instead increasing your vehicle's speed to such a rate that you cause the Earth to rotate backwards through time until before said officer was born, at which point he or she will be temporally unable to give you a ticket.

You can fit more pancakes into your mouth at one time if you have your tongue, a generally useless organ unimportant to survival, removed.

Your chances of scoring a fine babe in an Internet chatroom go up 200% when you falsely claim to be the inventor of ponies and rainbows. Note: these girls will not be of legal age for 8-14 years.

If you save a penny every single day for thirty years you will have enough pennies to literally bury your worst enemy alive in copper. If he has allergies to copper, his death will be exceptionally painful, causing word of your savagery and thriftiness to spread throughout the lands. Otherwise it will be a moderately painful death, which isn't too shabby when you consider the price.

That is, at present, all the tips and tricks I can think of. I hope you are able to put these gems of wisdom to use and make your life a shining example for those around you!