You've Got the Touch! You Are an Asshole!

The teeming masses of evil, pathetic, and disgusting humanity have long been the subject of articles here at Something Awful. From a furry's yiffing to a Scientologist's e-meter reading we have attempted to categorize, catalog, and in most cases, attack the stupidity that has taken root on God's Green Internet. There is one archetype so utterly abhorrent that I have neglected to shine the light of sweet mob justice on them; so repellant that to even discuss them in passing causes bile to rise in my throat. Perhaps more than any other single reason, I have kept them off the list for so long because they make up an inordinately large percentage of our audience.

I am referring, sadly, to Power Gamers. These banes of our collective Cosmic Forge have taken over every possible outlet for the more casual gamer. They make it their duty to not just spoil the fun of others but transform their own existence into a juggernaut engine fueled by hatred of pleasure and a grim determination to be the biggest and most annoying fucker possible. Their only goal in life is to become obsessively good at whatever game they have chosen; to turn what was intended as a fun diversion into a grueling and painstakingly practiced exercise.

There are no redeeming qualities about the Power Gamer because merely existing as a Power Gamer guarantees that they are well beyond contrition or compensation. A Power Gamer could rush into a burning orphanage and save George W. Bush's dog from a river of lava and they'll still be a filthy Power Gamer. Don't let yourself ever be tricked into thinking the good a Power Gamer has done could possibly outweigh the bad.

The chief question you are probably asking right now is "who wants shark chum?" or possibly "what, precisely, is a Power Gamer?" The Power Gamer, like the devil himself or possibly those judge robots from "Transformers: The Movie" has many faces, so let's spend a few moments covering the variety of forms they can take. 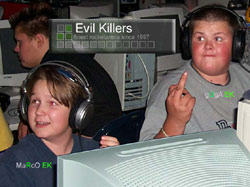 Killed you like a krazy klown with a knife!Seen Playing: Unreal Tournament, the leaked Doom 3 Alpha, Counterstrike, Quake 3 or Quake 2 (still), and rarely one of the Battlefield games.
Identifying Traits:

Will have a "hardcore" name like Deadeyes or Iceinator that probably includes at least one number/letter swap.

Usually announces kills with a witty text macro that plays on their name. For example, someone named Skullstabber might say "Ur head just got punctured" and someone who uses the moniker Bloodjugs would say "I just filled another pitcher w/ ur guts".

Seriously talks about playing competitive gaming as a career path.

Brags about "endorsement deals" but neglects to mention they are from Sam's Heating and Air Conditioning, Hank's Burger Tub, and Bawls. A 90 year old woman could get an endorsement deal for crossing the street from Bawls.

Administers a private clan server with unbelievably draconian and pointless rules like "no jumping up stairs", "address clan members as 'sir'", or "using the sniper rifle equal kick ban". Will kick anyone off the server who is not treating a match with the seriousness of a doctor performing open heart surgery on the president.

Description: Most of you reading this are probably familiar with the FPS brand of Power Gamer from unfortunate run-ins when you happened upon the wrong public clan server. They are probably the most common type of Power Gamer and are almost certain to readily announce themselves. The closest thing to a sense of humor the FPS Power Gamer has is the comically unfunny zings they offer up on a server after they either kill or kick-ban someone. 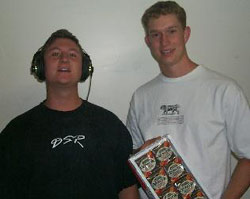 "Yo, team DSR would like to give a big shout out to Matt's Cookies for sponsoring our team!"Seen Playing: Starcraft, possibly Warcraft III or one of the Command and Conquer games.
Identifying Traits:

Spends over half of the day drilling build orders in skirmish mode to try to make mouse movement and structure placement a part of muscle memory.

Thinks rushing is for amateurs, because the real masters have developed a multi-tiered rush strategy for 30 seconds, one minute, and three minutes into the game.

Can creep and level three heroes up to ten in the time it takes an average player to complete his town hall.

Is probably working on a keyboard macro that will allow him to win matches in under five minutes by pressing 28 buttons in sequence.

Eats every meal while watching replays of previous matches.

Description: The RTS Power Gamer is easily spotted by the fact that they remain completely quiet during games, ending their inevitable victory with a simple "gg". This is in direct contrast with the usual jackasses who play RTS games online and liberally pepper their conversations with creative misspellings of the word "faggot". While this may seem to be a good thing about the Power Gamer you have to remember that playing against them will either be a brief and infuriating rush match or, for skilled players, a tedious exercise in repelling endless and carefully incremented waves of the enemy backed up by incredibly complex keyboard bindings. 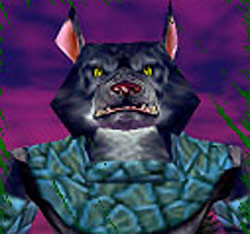 Spends at least five hours determining their character's precise course of advancement and item optimization up to the level ceiling before making a serious attempt at character creation.

Already had a fully established guild before their game of choice even entered public beta phase.

Would not look away from the computer screen during the repetitive and predictable combat if a nuclear bomb detonated outside their window.

More than willing to literally sacrifice the lives of children through neglect to properly camp that high level spawn.

Has spent real life money purchasing items in the game.

Has earned real life money collecting items in the game for auction on the Internet.

During rare and restless nights spent in bed instead of slumped in their computer chair, the MMORPG Power Gamer actually prays to the fictional gods in their game.

Would kill another human being over the experience loss caused by a PKer.

Probably writes thousand word essays to post on web sites and message boards about how stupid the concept of PKing is. May have even started a write-in campaign that got PKing removed entirely from their game of choice.

Has rigged an apparatus to allow them to defecate while playing the game. Either that or they aren't held up by "the man" and "society" and the oppressive illogical moral arguments about not pooping your pants.

Description: Power Gamer MMORPG players are usually the sort of people who obsessively game their characters, from launch, up to the maximum possible level in a matter of days. There are worse Power Gamers within the folds of the MMORPG Power Gamer community, noxious characters so shameful and vile that even other gamers are reluctant to think about them. They are the sort of morons who inevitably lead to the worst stereotypes about gamers and especially MMORPG players. I'm talking about the people who let their kids die because they were too busy fighting some orcs to bother letting them out of the car. Or the retards who kill themselves because that hot night elf in the chain mail bikini they have been romancing turns out to be a 50 year old male pedophile just like they are.

The Pen and Paper Power Gamer 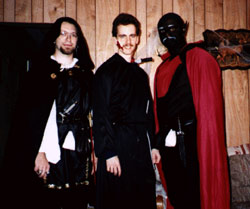 During character creation mentions either werewolves or vampires.

Creates an intricate back story based off of the Lord of the Rings to explain why their character has a super powerful sword or axe at the first level.

Rolls a suspicious number of 18s.

Arrives at gaming sessions having just spent "all last weekend" using their character in an epic adventure run by "some guy they work with". Everyone else is level 3, they are now level 25.

Is either excessively bossy during gaming sessions, forcing everyone to participate in a narcissistic side plot that probably involves some form of sexual fantasy, or they remain stone silent until combat.

Has an army for Warhammer that consists of a squad of space marines and eight model cars that they made up stats for using some apocryphal "official rules".

During any gaming rules disputes claims to have played "with the designers at GenCon" and directs any further arguments to a crude mace they keep in the rusted out trunk of their Buick.

Owns at least five shirts with wolves or dragons on them.

Description: The Pen and Paper Power Gamer is the ancient ancestor of today's breeds of Power Gamers. Though paper and tabletop gaming has abated somewhat in popularity there remains a steady supply of the Neanderthal-like Power Gamers of yesteryear. While some Power Gamers actually have real lives outside of their gaming addiction this is never the case with the Pen and Paper Power Gamer, who will actually work a job for no other reason than to constantly buy gaming supplements and books. Most of you have probably known one of these people. They are well past college age, maybe even in their mid-thirties, living in the basement of their parent's house, hoarding impossibly vast collections of role playing games and books with all of the money they make from their minimum wage job. These are the saddest and most disturbing kinds of Power Gamers because they are terminal; their crazed addiction to gaming will literally kill them. Whereas casual gamers will eventually grow tired of gaming or evolve into the stodgier forms of the hobby like Napoleonic war games or historical modeling, the Power Gamer never does, remaining alone with his hobby until his late thirties. At this point the Power Gamer gets a job related to gaming (usually involving a failed hobby shop), commits suicide, or dies from Dorito related illness.

Do not be fooled! While this brief list has been detailed, it is anything but comprehensive. Power Gamers can be found lurking anywhere that games are sold or played. You will find them in the anal-retentive grognards of turn-based strategy games or flight simulators. They screech from the frontlines of your favorite stat-crunching sports title or combo-dialing fighting game. Look hard enough and you may even see their joyless black eyes looking back at you from the darkness of a top down space shooter, waiting to sap the fun out of dodging 50,000 glowing blue spheres. Whatever you do, whatever price you must pay, never become a Power Gamer.