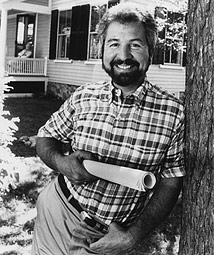 The man. The legend. The flannel. George Lucas. It was a typical day in my office. I was trying to come up with an idea for my next update by repeatedly slamming my head into the desk when my door was flung open violently. It was Lowtax. Apparently the entrance wasn't dramatic enough for his tastes, so he stepped back into the hall and shut the door so he could try again. This time, he hurled himself directly through my door as though he were some sort of crazy Kool-Aid man who crashes through doors instead of walls. Except he wasn't cherry-flavored. I think. As he brushed the debris off of himself, I noticed that the boss' suspenders were flared like nostrils and immediately knew something was up. Don't ask me how they flare, they just do when he gets agitated.

"This is your assignment", Lowtax said while holding up a hefty binder stuffed to the brim with paperwork and what appeared to be lettuce. "You'd better not fuck this up, fuckupper. You do, and I will destroy you and everyone you know. Including me." He tossed the binder at my desk, but it skipped off the recently-waxed surface and sailed through my open window, undoubtedly killing a window washer or a low-flying hotshot fighter pilot who had ventured into the danger zone one time too many. The boss glared at me and said, "You know that's coming out of your paycheck, right?"

I nodded solemnly. "Lowtax, you're a jerk. I'm going to punch you so hard, right in your jerk armpit", I thought to myself. Amazingly, he pretended not to notice this and began to brief me on my assignment. And what an assignment it was.

It had just been announced that the original Star Wars trilogy was finally coming to dvd, but instead of the theatrical releases that so many of us know and love, the dvd set was going to feature the Special Editions that were released in the late 90's. In the Special Editions, George Lucas took advantage of recent advances in filmmaking technology to edit existing scenes and create entirely new ones. Some people think that the Special Editions are the modern day equivalent of Leonardo da Vinci adding a mustache to the Mona Lisa, while others disagree and say it's more like Vincent Van Gogh painting gigantic cocks into the foreground of Starry Night. Either way, I was given the task of digging up as much information on the monumental dvd release as possible.

I'll admit it, I'm a huge science fiction nerd. I try to conceal it by speaking strictly in Klingon while discussing sci-fi and by hiding my enamored smile behind a stormtrooper helmet, but somehow people still pick up on it. Being such a fervent sci-fi fan, I knew that the only way to get the scoop on the dvd release was to talk to the Flanneled One himself. But how? Having written the book on stealthy investigative journalism (cleverly titled "This Book Is Not About Stealthy Investigative Journalism, and Is In Fact Just An Inconspicuous Bush"), I decided that the best course of stealthy action was to sneak up on Lucas' Skywalker Ranch and ring the doorbell. When I arrived, I was immediately taken aback by the size of Skywalker Ranch. You know my bathroom? The ranch is AT LEAST five times as big as that. It would take a snail days to go from one end to the other (not accounting for wind). 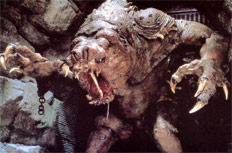 What cruel fate awaited me?

I approached the front gate and paused to collect my nerves. Here I was, in the very epicenter of the geek universe. The butterflies in my stomach stirred, but luckily they were in a protective plastic bag when I swallowed them. They would be safe for the wondrous journey that laid before them. I pressed the intercom button and was pleasantly surprised when George Lucas himself answered cheerily and buzzed me through the gate. I was overcome by a sudden feeling of dread as the gate shut behind me, and I quickly surveyed my surroundings. I was in the dirt-floored staging area at the center of a gladitorial coliseum. Surrounding me were rows of seats in which an assortment of dusty and useless droids were scattered about to form a crude imitation of an audience. In a linen-draped balcony that overlooked it all, George Lucas rolled his head back and laughed deeply, then took a bite out of a profusely dripping roast beef sandwich while Warwick Davis fanned him with a palm frond. I was in an improvised rancor pit, similar to the one Luke barely escaped in Return of the Jedi. Luke had the Force, so how could I possibly defend myself? I wasn't very strong, and could barely fend off the mobs of female fans that swarmed me daily.

Before I could devise a strategy, Lucas leapt to his feet and tore his shirt off slowly, obviously struggling with the fabric. He then tilted his face to the heavens and screamed in a surprisingly shrill voice, "RRRRRRELEASE.... the rancor!"

Several silent moments passed. The three of us stood still, and soon the moments turned into minutes. Still nothing happened.

"What? Then what the fuck did I have all this built for?" Lucas scratched his beard thoughtfully, then turned toward me. "Congratulations! You have defeated my mighty rancor, and therefore deserve my respect. Come, we'll talk."

My display of bravery had impressed Lucas so much that he agreed to answer all of my questions. Over lunch, Lucas explained that the Special Edition of the Star Wars trilogy was only the beginning. He had decided to thoroughly edit the films once again this year, and the resulting "Super Special Editions" would be featured on the upcoming dvds that I was investigating. While I wasn't able to view the Super Special Editions for myself, I faithfully jotted down the list of changes Lucas explained to me. When you bring your shiny new Star Wars dvds home later this year and prepare for a wave of nostalgia to wash over you, be on the lookout for these major changes:

Just when you thought it was safe to swim in space...

Lucas realized that fans simply couldn't get enough of the Jedi, so the Super Special Edition is guaranteed to have at least one Jedi in every frame of the film. "We want to just totally Jedi the fuck out of the audience." he says. "There will be Ewok Jedi, bantha Jedi, shark Jedi, and even a Jedi knight who that's made up of other, smaller Jedi."

The obvious love triangle between C-3PO, R2D2, and Jawa #2 will be more thoroughly explored.

Yoda is revealed to be a hobbit. I suggested that some people might see this as a cheap gimmick to bank on the tremendous success of the wildly popular Lord of the Rings trilogy, but Lucas dismissed this. "Rubbish! Balderdash! Uno! This was simply my, ah, original intent with the character. Unfortunately, back when I made the first films the technology didn't exist to explain Yoda's true origin. Puppeteering was really... primitive back then? Yes, very primitive."

- A twenty minute version of the jarring performance by the band in Jabba the Hutt's lair
- Interpretive dance performed by Luke when he realizes Darth Vader is his father
- "Fette's Vette" by MC Chris now plays in the background when Boba Fett is onscreen
- An operatic performance by the Tusken Raiders that provides insight into the sensitivity and sophistication of their culture, sang entirely in long and drawn out hoots and rifle blasts

The famous cantina has been changed into a barber shop which is run by several quirky and humorous black men. "I realize that Star Wars hasn't appealed to negroids in the past," Lucas explains, "and I blame myself. I mean there was Lando, and that's it. While Billy Dee Williams was probably the smoothest man alive, it simply wasn't enough. Before settling on the barber shop, I had considered cranking the brightness of the film down dramatically to make everyone darker, but the guys in the editing room don't let me touch the controls anymore."

At this point, he once again waved off my concerns about the scene in question ripping off of another film, and he threatened to have my "memory banks erased" if I brought up the subject one more time.

Han Solo never shoots. Ever. In the original release of the first Star Wars film, Han distracted a bounty hunter that was after him and then shot the bounty hunter dead before he could even make a move. In the Special Edition, however, the bounty hunter shot at Han first, making it look like Solo killed the bounty hunter purely in self defense. This seemingly small change belittled one of the core qualities that made Han cool in the first place in many fans' minds, but Lucas feels otherwise. "I think the greatest quality of Han's character is actually his striped pants. Every time he shoots or talks, it takes the moviegoer's focus away from the pants. Removing every single blaster shot that Han fired is such an obvious decision that I'm embarassed I didn't think of it sooner."

The new ending for Return of the Jedi shows a side of Ewok life that Lucas felt was too brutal for audiences the first time around. The Ewoks, as it turns out, are cannabilistic in nature and worship C-3PO with such devotion that the droid begins to have delusions of grandeur. From his shadowy throne room deep in the jungle, C-3PO hears the Ewok villagers outside sacrifice their weak and infirm in his honor. "I watched a bantha make the Kessel run in twelve parsecs," says the droid as he pensively rubs the crown of his smooth head, "That's my dream. That's my nightmare. Such is my lot in life. The horror. The horror."

Stormtroopers no longer close their eyes when firing their blasters. The trilogy is now a single thirty-seven minute film.

While it remains to be seen whether these changes will make the films better or not, my visit to Skywalker Ranch was quite an experience. I came away from the visit with a new perspective on a man I've regarded as a geek god nearly my whole life, learned the dangers that are inherent in immersing yourself in too much fiction, and found out the hard way that you should never use a homemade "electro-bidet" unless you're absolutely sure that you're safely grounded first.

You may think of State Og as a heartless conglomerate, but after this week's update you'll realize that it's really full of workers who are just like you. Except they don't have hearts.

When Big Tobacco wanted to clear-cut an entire forest, burn all the lumber, mix the ashes with medical waste and dump it all into the local water reservoir for no perceivable reason, ElCyberGoth was there at all the protests carrying a sign of near-billboard proportions with the words, “BIG TOBACCO IS HITLER!” When the government wanted to test crack-babies as a replacement for armor-piercing tank rounds, ElCyberGoth was there at all the protest with an even bigger sign featuring the words, “CELEBRITY CHEF EMERIL LAGASSE IS HITLER!"