It's rare to see a week of such high quality. (The worst film of this batch was actually released last week, so bear that in mind.) Let's see, we have Hugh Jackman's robot-boxing vehicle Real Steel, George Clooney's political thriller The Ides of March, Rowan Atkinson's unasked-for sequel Johnny English Reborn, and Courageous, the highest-grossing movie of last week. Finally, we assess one of the low-quality alternatives to Current Releases. We know you have a choice in web-based movie-opinion outlets, and we appreciate that you choose us.

EXPECTATIONS: I've been looking forward to this film since before the start of summer. The trailers for Real Steel may look tacky and cliche, but to me it feels like the actual movie is going to deliver more than that. It looks like a film that might manage to succeed where this summer's Transformers sequel so spectacularly failed. If it's done properly, a movie about a dad learning to be a better dad through the magic of teaching a robot how to box could be an amazing thing. I may be wrong and it could just suck, but I see a lot of potential in that angle.

REALITY: Let's be honest here for a moment. Real Steel is a film of simple pleasures. It's a light sci-fi film about the world of robot boxing. While Hugh Jackman is always entertaining to watch, the real stars of this show are giant CGI robots pummeling the ever-loving hell out of each other. Depending on your age and cultural disposition, that in itself may or may not sound like a good time at the movies. If it doesn't sound like your thing, that's fine, but there's one thing you need to know: Real Steel is Hollywood filmmaking in its finest, most entertaining form. 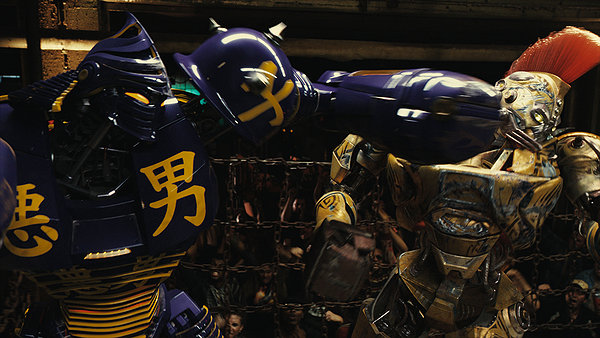 It's 2018 and Charlie Kenton (Jackman) is a has-been boxer who makes his money touring county fairs and pitting his boxing robots against angry bulls. After losing his last robot, Charlie comes into custody of his estranged 11-year old son Max (Dakota Goyo). While digging around a junkyard for robot parts, Max happens across an old sparring robot named Atom. After discovering Atom was built with a shadowboxing feature, which lets him mimic his controller's movements, Charlie and Max take their bot on the road and quickly make a name for themselves in the underground boxing circuit. Built for abuse and trained by a real-life boxer, Atom soon finds himself challenging the world champion: a sleek, "smart" behemoth named Zeus.

If you're thinking to yourself that this sounds like Rocky crossed with a little bit of Robot Jox, you're not too far off (also kudos to you for knowing Robot Jox). More than anything, this film is built in the mold of a typical boxing movie. You've got the down-and-out fighter; he has a major life setback; he gets an opportunity to fight; he trains and trains and trains; and then he gets to fight, the end. That's this film in 33 words. Then again, that's every sports film in 33 words. Real Steel simply has the added benefit of featuring robots.

This film is all about showmanship. Sure, you can make a movie about giant robots fighting one another, but if you want to entertain people with it, you'd better be able to give them something worth seeing. Real Steel pulls out every trick it can muster to entertain its audience. Atom and Max's first fight, for example, is against some jackass with a liberty-spike mohawk and a robot that looks ripped straight out of "Mega Man 5," and the whole thing takes place in what used to be the lion pit of an abandoned zoo. When Atom makes it to the big leagues, Charlie's advice to his son is simple: "Make Atom dance. People will love it." And as much as we here at Current Releases rag on movies for including needless dance scenes, I have to say that watching Max and Atom dance together in a boxing ring is one of the most oddly endearing moments I've seen on film in a long, long time. It's that kind of energy and enthusiasm that will make audiences giggle like idiots, knowing full well that what they're watching is absolutely absurd. 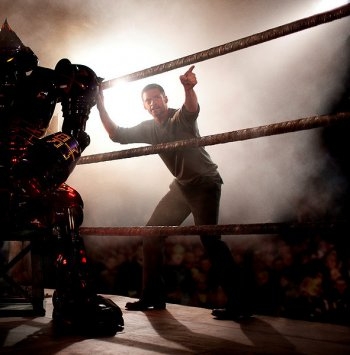 Look, he didn't make the obvious joke! Let's get him!One of the real successes of this film is that each robot has a distinct personality. None of the robots are self-aware or speak or anything silly like that. Their personalities come through in their design, their fighting style, and the personalities of their operators. Because Atom is the only robot controlled by an actual boxer, his motions are fluid and he's almost human in his range of motion. Noisy-Boy is a Japanese robot with a head shaped like a samurai helmet. Also, there's a hillbilly robot that wears a metal cowboy hat. Name me one Transformer that wears a metal cowboy hat. That's right, you can't.

Now, Real Steel isn't without its faults. For such a simple story, there is way too much exposition. The first act spends an inordinate amount of time explaining the world of the future and the characters in it, when the movie's vision of the future is pretty much just the present plus robots. The same goes for our two leads. It's not hard to grasp what kinds of people Charlie and Max are, and yet we're forced to endure a few too many bits of father-son bonding. Chalk it up to director Shawn Levy wanting to make sure all the kids in the audience are up to speed. It shouldn't take two hours and change to tell this story, yet there are enough good moments peppered throughout to keep us from getting bogged down in needless family conflicts.

So the film has its share of narrative speed bumps and plot holes (we invented robots and our first impulse is to make them do sports?), but the undeniable truth is that Real Steel is an insane amount of fun. Hugh Jackman is clearly having a blast here, and equally energetic performances from co-stars Goyo, Evangeline Lilly and Anthony Mackie go a long way in selling this film as anything other than a shameless plug for toys. I have no doubt that the toys will sell like plastic hotcakes, but the movie behind them is certainly engaging enough to justify the cash grab.

This movie had nearly a dozen opportunities to completely screw itself up and turn into some ridiculous cartoon, and yet it somehow dodged every single one of them by simply staying on-course with the "boy and his robot and their dad" story. There's no insidious subplot about the robots turning on the humans; there isn't a stupid twist where Hugh Jackman has to get in the ring and fight Zeus himself; and there's no maudlin family drama about who really has custody over Max. Real Steel keeps its eyes on the prize by doing its one job well and entertaining the fuck out of everyone willing to buy a ticket.

Make fun of it all you want, but Real Steel is the reason people still go to the movies.

MINORITY REPORT: With most critics falling all over themselves to make the exact same joke about this film instead of just reviewing the damn thing, it is reassuring to finally learn that it is every bit as entertaining as its trailers suggested. The only way to make a film with fighting robots really work is to make the film about the robot-fighting itself. Take note, Michael Bay. - Ian "Professor Clumsy" Maddison