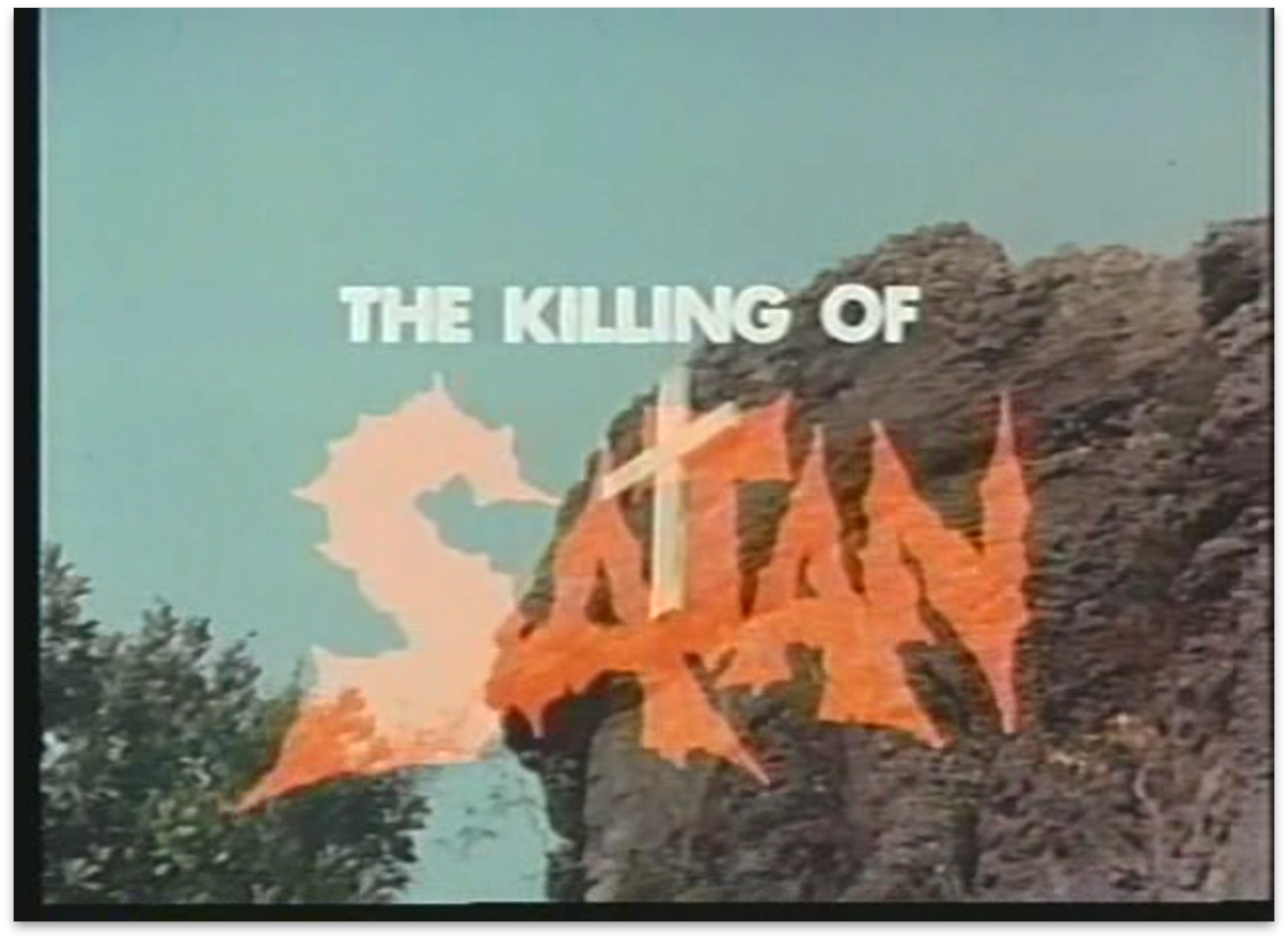 Overview: Satan kidnaps a man's daughter and plans to make her his bride, but the man intervenes by killing Satan first. Some other things happen, too; otherwise the movie would be 20 minutes long. (It still is, if you're watching it correctly.)

The Case For: This is the only film you'll ever be able to justify showing at your bible study group that contains full frontal nudity and half of someone's face being torn off.

The Case Against: The rest of the movie is so bad that half your bible study group will convert to Satanism on the spot.

The Killing of Satan delivers exactly what it promises, more or less. We're not telling any tales out of school here by letting you know that yes, Satan appears in this film, and yes, he's going to die. This is, of course, far better than having a movie called "The Killing of Satan" where the title is a metaphor for the human condition and the real enemy is man's injustice to man, or something equally artsy and disappointing. No, you can rest assured that Beelzebub gets his comeuppance.

Unfortunately, there's a problem with this setup: We're expecting a battle to the death with the Prince of All Lies, so nothing in the movie is going to be the least bit interesting until we get it. A smart filmmaker would have the Devil show up at the very beginning to get on the protagonist's bad side, and then maybe pop up occasionally to taunt and harass him, slowly building up to the final showdown. In The Killing of Satan, the titular nemesis doesn't actually appear until two-thirds of the way into the film. Some of the non-Satan-oriented fights are so pointless that the scenes themselves commit suicide out of shame.

Who can save us from the Lord of Darkness? Enter Lando, the greatest man to ever don jeans and a jean jacket. Lando has some kind of dark, murderous past, from which he escaped by finding religion and devoting himself to his family. Let's see here, we've got a gentle killer with a heart of gold, plus he gets to be dubbed by the only native English speaker. Yep, he's definitely the protagonist. We even get to see his dream sequences, though Lando's subconscious is a scary place with a piss-poor special effects budget:

Now, Lando can't just go and murder Satan for the fun of it; that wouldn't be very heroic. Thus the first act of the movie is devoted to pissing Lando off, as the minions of Lucifer proceed to murder his son and kidnap his wife and daughter. "Murder" is kind of a strong word, given that Lando's son, who failed to inherit his father's killer instinct or really any higher brain functions at all, decides that casually strolling out the front door is a good tactical response to a hail of gunfire. Either way, it's good enough to get Lando nice and angry. So angry, in fact, that while he's shooting back he takes a couple of rounds to the chest and proceeds to die painfully. This isn't a near-death experience, mind you, he really dies. Cold body, crying widow, the whole nine yards. Dead as a doornail. 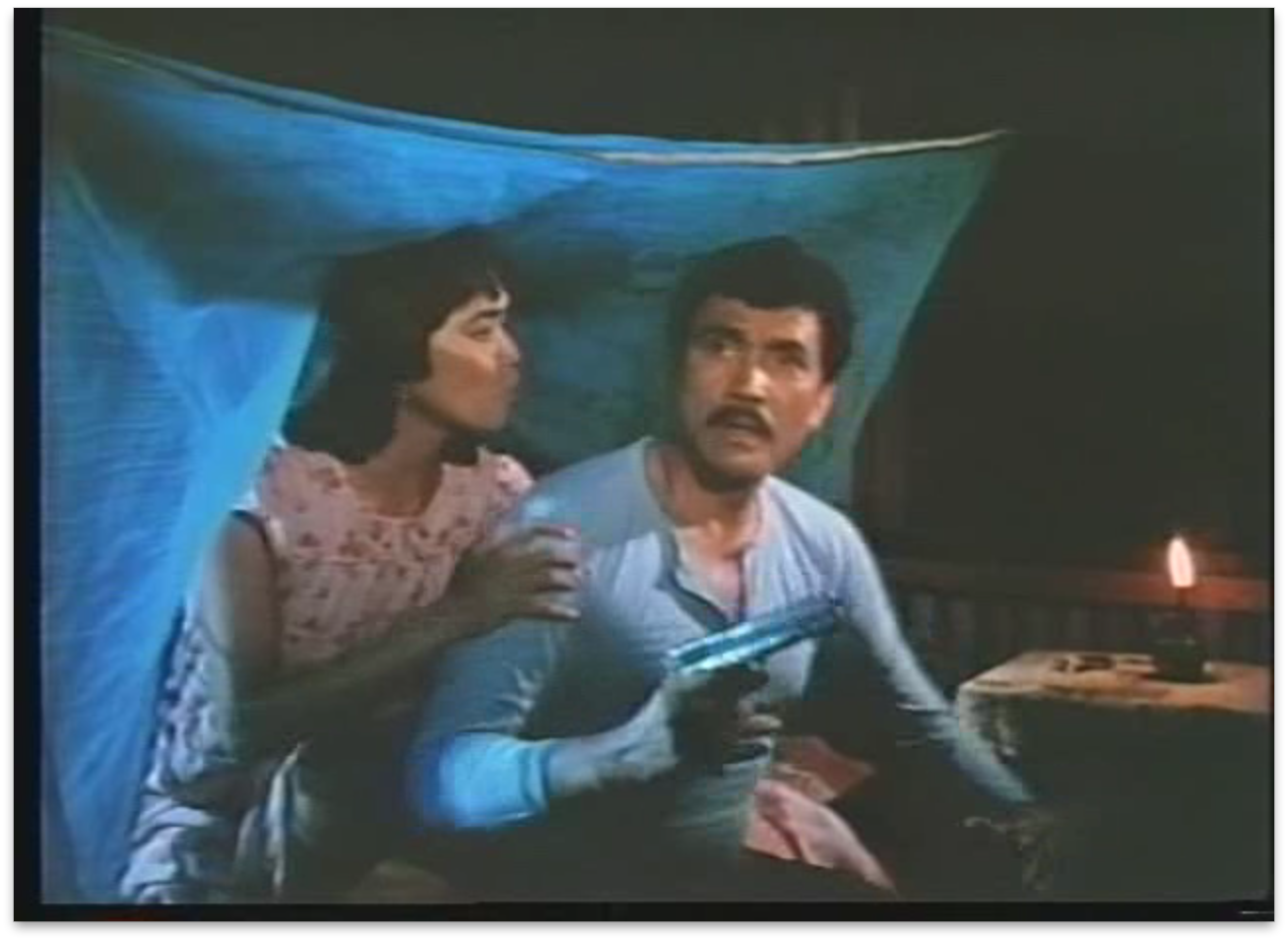 EVERY DAY I PRAY TO GOD THAT HE DOESN'T FILL ME WITH MURDEROUS RAGE AGAIN.

Of course, this is a Christian movie, and what better preparation could there be for Satan-killing than dying and then being resurrected? Actually, there's a perfectly rational explanation for Lando's sudden turn of good health: The bullets are lodged in his uncle, who took the bullets for him retroactively while lying in his bed 50 miles away. After watching that embedded dream-sequence video clip from a paragraph or so up the page, you might have been thinking "man, diving in front of a lethargic boulder must be the most elaborate way to commit suicide, bar none" and yet, here we are!

The uncle, whose magical powers come from being really, really into Jesus, passes them to Lando when he dies. The greatest of these powers is the mighty elbow spirograph, which can stop bullets, except they still make clean holes in Lando's shirt somehow. That's right, the filmmakers went to the extra effort of making bullet holes appear in Lando's clothes, even though it would have made more sense if they hadn't bothered. Apparently there is such a thing as negative attention to detail.

Lando predictably sets off to rescue his family, accompanied by some villager who we'll call Captain Exposition. The good Captain explains that their wives were kidnapped by someone called the Prince of Magic, who is Satan's right-hand wizard or whatever. The movie tries to dance around who the Prince's employer is with phrases like "the Dark One" or "the Master," but the title of the goddamn movie is "The Killing of Satan" so they're not fooling anybody.

Eventually our dynamic duo arrives at the Prince of Magic's lair/cave/bachelor pad, where we're treated to a lesson in snake self-defense! Remember, kids, if you ever have a live snake thrown at you by a film crew, just follow these easy-to-remember steps, which Lando helpfully demonstrates:

It's as easy as 1-2-3! Unfortunately, Lando gets lazy and tries to burn one of the snakes to death instead, which causes it to turn into a naked Vulcan midget. See what happens when you don't follow the rules, kids?

Mini-Tuvok goes down without much of a fight, just like all of the other minions that he and the Captain face. One such minion is the Captain's own hypnotized wife, who expresses her gratitude for being rescued by tearing his face off. Her husband retaliates with a psychic battle/staring contest that makes her cleavage explode, which is a decidedly less impressive effect. And with that, the Captain and his wife exit the movie forever, possibly due to being dead but it's not really clear. Neither of them was going to kill Satan, so good riddance.