I Wanna Be an Internet Tough Guy 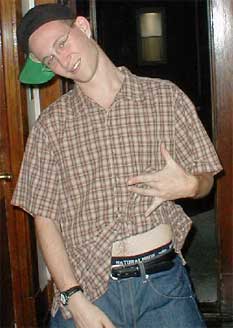 Monday, January 26th 2004: a day that I shall forever remember with infamy. When I woke up that chilly Winter morning, I had assumed it would be just another ordinary, average day full of cleaning up dog urine and getting fat off Flavo-Fives. I turned on my computer, which is what I usually do when I want my computer to turn on, and within a minute my entire world turned upside down. I'm not talking about a good type of turning upside down like in "The Fresh Prince of Bel Aire," I mean a bad kind of upside-down like when you're stuck on a roller coaster loop sitting next to a morbidly obese man who sweats onion dip through his manhole-sized skin pores. The moment my computer booted up my copy of Windows XP Eddie Bauer Limited Edition, I received the following distressing message which hit me across the face with the power of megaton bomb. Uh, a megaton bomb which somebody used to hit me across the face, because I was like, uh, in a warehouse and the bomb was on some chains and swinging around and they swung it into me because I owed them a lot of money. And they were gangsters, gangsters who wore black leather jackets and drove Japanese motorcycles with neon flames painted on them.

Let me tell you what ladies and gentlemen: I was shocked. Mortified. Horrified. Overwhelmed. Stupefied. Gorked. Okay well not necessarily "gorked," but Thesaurus.com falsely claimed that "gork" is a synonym for "shocked," and you can clearly tell it was lying so I would look like a fool on my own webpage. After receiving that digital death threat, I began weeping like an injured schoolgirl and shouting, "911, please, send over some officers right this instant! I fear my very life may be at risk by some Internet ruffians and ne'erdowells!" Then I added, "never forget" and said the Pledge of Allegiance because every time I see the numbers "911" I think of the tragic day when Dale Earnhardt crashed the Challenger space shuttle into the Twin Peak Towers. Unfortunately the police station is a good 12 miles away from my house so they did not hear my whiny demands of justice, forcing me to take matters into my own hands. I briefly considered shriveling up and huddling in the corner of my closet, trembling at the thought of my nefarious cyberspace tormentors, but then I remembered that a monster might be hiding in there so I ruled that option out. I fought back the tears and various other liquids flowing out of my orifices, determined to not let the raw terror overcome me like that one Halloween when I was nine years old and went to the haunted house downtown run by the UMKC college students and when I walked in they showed me photos of my mother naked. I would not succumb to my fear! I was in control of my own destiny! My strength overpowered the impending sense of paralyzing fear, providing me with the precious energy needed to march over to my computer, sit down proudly at the keyboard, and then yank out the power cord while shrieking like a ferret in a vat of acid. 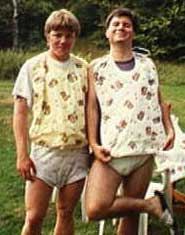 You see, this sense of immortal dread came from an Internet Tough Guy, one of the more burly and macho miscreants cruising around the digital highways and byways like a greased pig sliding up Paris Hilton's sloppy vagina (this joke is funny because it's a relevant, topical reference to a pop culture icon. Please don't read this joke after two years, as it will lose its freshness). I'm sure you have encountered these buffed up musclemen during your time on the Internet, usually in whatever weird Yahoo chatrooms you hang out in while waiting for your filthy dickgirl anime to download.

Not only can people be scared offline by Internet Tough Guys, but as you can see in this colorful example they can steal away your heart and innermost dreams. Bunnychick473662 and -={tWiStEd-rEaPer}=- went on to have a whirlwind affair full of unbridled love, romance, and passion until 8:30 PM rolled around and bunnychick473662 was forced to go offline by her father who continually insisted she "had to wake up early tomorrow because the trip to grandma's house takes three goddamn hours." At that point -={tWiStEd-rEaPer}=- broke a Ruffles chip in half with pure rage (and his hand too), then proceeded to play Madden 2004 on his Xbox with pure rage (and his hand too). The question here is if you, a peaceful, law-abiding Internet citizen of Cyberspace and the Information Superhighway with email.com dot net, will allow yourself to be terrorized by these roving demolition crews tearing up everything in their path like digital locusts. I for one am sick and tired of rolling over and exposing my bright pink underbelly every time another Internet Tough Guy rolls into my private conversations and begins furiously misspelling various monosyllabic words with the seething hatred of 1,000 Jerry Springer guests. This is why I, Rich "Vegetables" Kyanka, have spent the past three months brainstorming and researching how to be an Internet Tough Guy so I would never become a victim again. I hope you treasure this information as much as I do, because if you don't then that's grounds for a lawsuit. 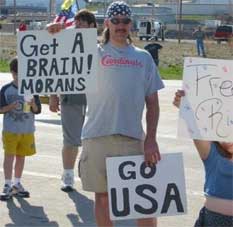 STEP ONE: CHANGE YOUR NAME TO SOMETHING INTIMIDATING.

Many people don't put enough thought and effort into choosing an online handle before they take a fatal step into the blackened abyss of the Internet. Some people are so ignorant that they choose something as ridiculous as their own name! Hey there "JakeBuckner," I'm sure you're a real badass in real life, but online you're nothing but another fag in a long line of fags who are trying to win the faggy "Queen Fag" award in the "Fag of the Year" contest. Pick a name that follows these simple rules:

If you still cannot determine the appropriateness of your online handle, please consult the following handy set of examples: 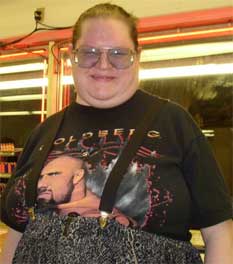 Internet Tough Guys speak in a cryptic, aloof language that many of us cannot understand due to the fact that we're not all 10-year old hyperactive suburban children with ADD and a HP Pavilion running Windows ME. However, I have paid a team of leading researchers and scientists to share with me a collection of important data they gleamed from the Internet over the course of the past five years. Part of that data informed me that I incorrectly used the word "gleamed" instead of "gleaned," therefore making me look like an uneducated imbecile. Well you know what you egghead assholes? Maybe I'm not as smart as you and perhaps I don't get paid as well as you and I guess yes I've been arrested for indecent exposure to a Pepsi vending machine, but that doesn't mean that you don't make the same typos as me do. Here's a brief list of some of the more popular phrases and words these folks use. Try to use them as much as possible if you want to quickly become the "top dog" of the "Internet" while using quotation marks "incorrectly."

Mix and match these words to create a wonderfully exciting life for yourself, as shown here:

When in doubt, call somebody a "fag" or insult their masculinity. If you feel you have used the word "fag" and its many exciting variations too much and it has simply lost its emotional impact, start threatening to murder or beat up your victim. It doesn't matter if you live thousands of miles away from them, if your parents have grounded you, or you lack the strength to hoist your moist bulbous ass out of your authentic Captain Picard replica commander's chair, as the Internet was invented to allow people like you and me to make countless empty threats! Way back when Dr. Ed Internet was working on inventing the very first Internet, he had to constantly take time off to repeatedly call "A. Anderson" in the phone book and shout into the telephone, "I'M GONNA KILL YOU FAG AND FUCK YOUR FILTHY WHORE WIFE WITH A ROTTING DRUM STICK AND MURDER HER WITH THE NOSE CONE FROM A NASA SPACE SHUTTLE!" He created the Internet with this useful service in mind, the ability to anonymously threaten strangers who live hundreds of miles away and have absolutely no clue who you are or why you are so passionate about taking their life. 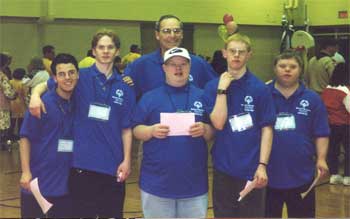 What's the point in possessing all this glorious knowledge if you're afraid to use it? Now that you're crammed full of knowledge tighter all the turkey in Jerry Lewis's head, it's time you moved out into the wilderness and spread your message like a really horny bee who flies all around France just fucking the hell out of their pansy communist flowers. Hop onto public forums, chatrooms, and IRC channels full of people who are ready and waiting for you to spread your message regarding their heterosexuality (and lack thereof) while sprucing up any conversation with outright threats of tantalizing physical violence mixed with savory curse words, creating a delicious Internet stew! Now get on out there and spread the good word of fags, violence, and the Insane Clown Posse you Internet Tough Guy you!

Artists are known as a depressing, saddened bunch of sods. They have to be tortured to produce such meaningful and inspiring works, right? WRONG! The forum goons have taken the laughing gas to the morbid world of art, and come up with some really wonderful things. It made me so happy; I didn't have to have anesthetic while my dentist worked on my teeth this morning!