Last year WTF, D&D!? was proud to present a Rifts-themed monster artwork contest that had some amazing entries and handed out some really great prizes, like a 5XL Rifts t-shirt. We had so many wonderful entries from talented artists that we decided to hold another contest this summer. We were struggling along trying to get another contest together and we thought we had some prizes lined it up, but they fell through.

Then Wizards of the Coast contacted us and said they wanted to do an interview with us about WTF, D&D!? for their website. Surely a cautionary tale about how not to waste your time on the Internet, but nevertheless cartoon dollar signs popped into our eyes. Our foremost concern was seeing what sort of free stuff we could get out of the big D&D factory for our column that almost exclusively mocks their primary brand. Turns out they sort of don't hate us over at Wizards and they were happy to provide us with some cool books to give away in our contest as long as we said, "This Contest is not administrated, sponsored, or endorsed by Wizards of the Coast." See what I mean? They sort of don't hate us! 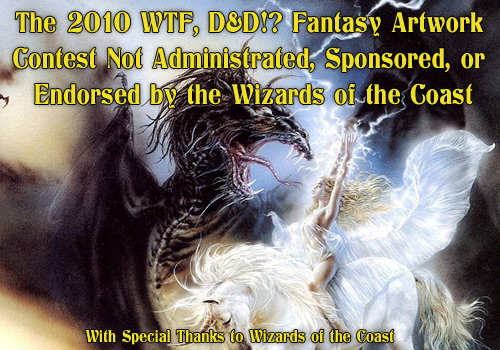 The theme of this year's contest was unintentionally proposed by me at the end of our Al-Qadim article a couple weeks ago. Steve has been insisting we do this ever since.

Steve: Maybe it's the barely-swaddled rack or the muscly butt sticking out, but I think you just had the best idea ever in history.

Steve: Uhhhh yeah, dude. The magical powers of D&D plus the untamed eroticism of fantasy artwork. Picture an orc.

Zack: This is the worst thing you've ever thought of.

Prizes for this year's contest, in no particular order, and with special thanks to Wizards of the Coast, are:

So do you have what it takes to bring a dash of the intense eroticism of an orc and passion of a cerebral parasite to the 1st Edition AD&D Monster Manual? If so, pick a monster, sex it up, and send us your art at wtfdndcontest@gmail.com on or before September 10th, 2010.