Rifts. Rifts never changes. There are over 25 so-called "World Books" in the crowded Rifts product line, each covering a geographic or dimensional location in the Rifts world. These books are often fairly large and contain an Aspergian feast of character classes, new weapons, skills, magical powers, suits of armor, robots, monsters, and page upon page upon page of detailed statistics. Rifts Japan is a perfect example of the goofball sensory overload that characterizes most Palladium books. It's so bad that in the introduction Palladium Spergelord Keven Siembieda promises a Rifts Japan volume 2 focused on the gods and demons of Japanese myth. 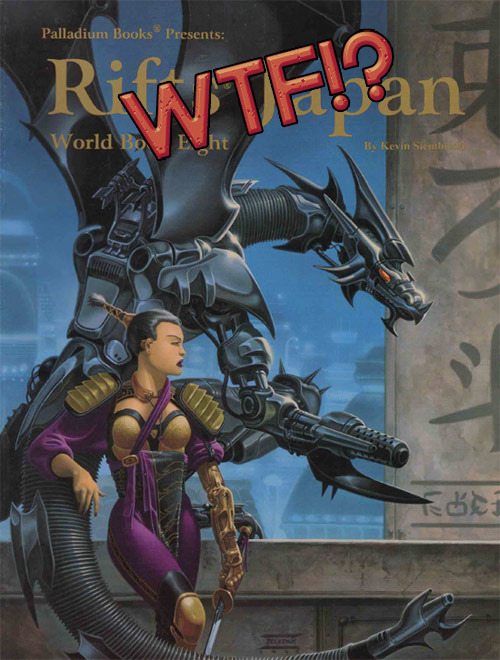 Zack: Steve, I blame you.

Zack: For whatever it is we're about to subject ourselves to.

Steve: You're the one that said readers kept asking for more Rifts.

Zack: I remember suggesting the Rifts Quebec book so we could make fun of French-Canadians, the worst Canadians.

Steve: Rifts Japan is full of myth and mystery and lots of cool power armor.

Zack: Every Rifts book is full of power armor.

Steve: Maybe I just appreciate Japanese culture more than you. You should really open up your mind a little bit and expand your worldview.

Zack: If I have to expand my worldview to include the entire Palladium catalog we're gonna need a lot more a-bombs.