Six years after the printing of 1977's Monster Manual, TSR shit out Monster Manual II. The creatures covered by the tome were not nearly as bizarre as 1981's infamous Fiend Folio, but still managed to scrape the bottom of the same barrel. Join us on part one of our two part spelunking through the miserable depths of Monster Manual II. 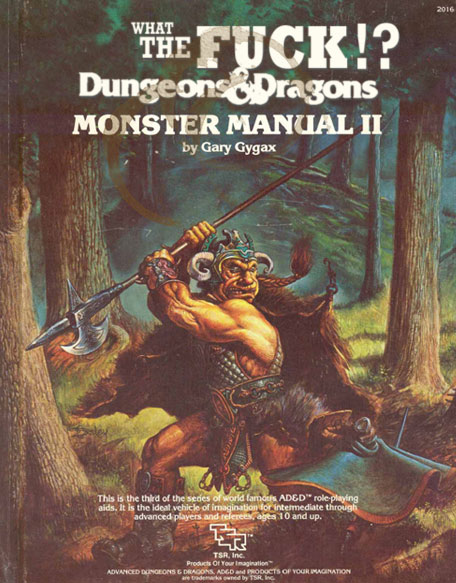 Steve: Next to Monster Manual one this is my favorite old school D&D book.

Zack: I see Gygax is taking the credit for everyone's efforts on this. Lucky for him, he died before our scathing take-down of his life's work.

Steve: That's the sort of jerk thing to say that will earn you some nasty emails. Gygax rules, heretic.

Zack: Oh, we'll see about that. We'll see what he rules.

Steve: An empire of adventure and magic and mystery.

Zack: Our first monster looks like a piece of evil fruit.

Steve: An empire of evil fruit.

Steve: Monsters that just sort of roll at you or fall on you or tip over onto you are one of the mainstays of D&D monster books.

Steve: Actually I think this one chases you around. It says it can "keep it up for hours without tiring."

Zack: No, they have a measurement for that. Nil. They use it on the 50 different slimes and oozes and all of the plant monsters. This rolling murder mushroom has some bullshit special intelligence that means it can chase you around really fast but can't count to three.

Steve: Huh, it also says it's evil. I've gotta admit, it would suck getting killed by this.

Zack: It may seem like there is no defense against the horror of the killer mushrooms, but if you play "Puberty Love" on the radio they'll turn back into regular mushrooms.

Steve: They should rerelease that song. It would sound so much better with Auto-Tune.