Ideally, when a thread from the Something Awful forums generates enough content to fill out a Phriday or Goldmine, it graduates to the glorious archives so people will devote their energy to new themes. Surprisingly, though, this system doesn't always operate at maximum efficiency, and sometimes SA Goons keep churning out great images after the thread's front-page showcase, but not quite enough of them to justify another installment. These Wild Obama follow-ups might have been shrouded in obscurity or, at best, consigned to a future Variety Pack, if not for the efforts of Photoshop colossus Everdraed, who single-handedly necessitated this update.

The revival started with this. Quality stuff, especially the sight of Michelle Obamazilla clutching a clawful of burgers. 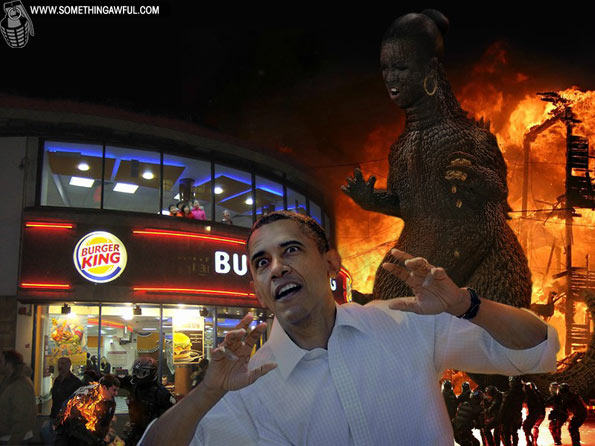 Everdraed seldom settles for static images, so he took to YouTube, your home for hard-hitting political satire! Here's his description: "An animated political illustration decrying the sordid actions of our president, Mr. Barack Hussein Obama, and his wife Michelle Hussein Obama. Audio is the US national anthem as performed by James Brown."

One amusing thing about SA Goons posting goofy anti-Obama content on YouTube is that without the identifying URL and/or watermark, conservative lunatics might take this stuff at face value and start forwarding it to their friends! 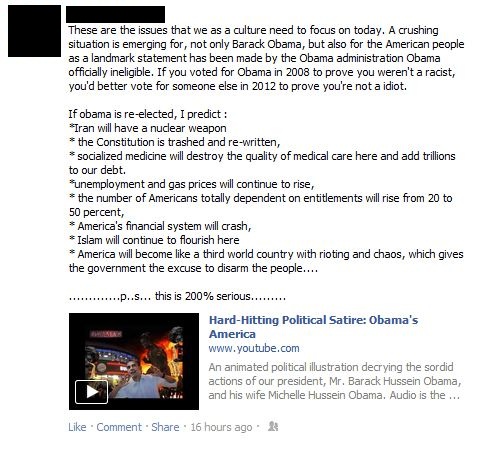 Everdraed's work has the most subversive potential, but other Goons contributed too, please check out their stuff!