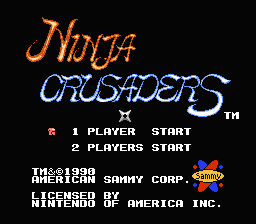 At a Glance: Once upon a time, when the sophisticated art of "playing games" was foolishly aimed at small children, little boys were a key demographic. Thus, developers everywhere scrambled to make products that were appealing to the varmits, often centering around the Number One little boy hobby: Breakin' Stuff. Dinosaurs, monster trucks, nuclear holocausts; if a game was about something that caused shit to be annihilated, kids would play it, no matter how horrid. So it should come as no surprise that Ninja Crusaders is just the first of many atrocities focusing on ninjas! 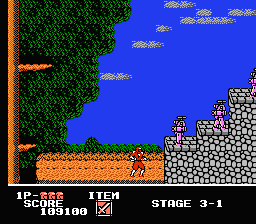 DANGER WILL ROBINSON.Graphics: Though I hate this game to be sure, I'll admit it's not really because of the graphics. But far be it from me to not whine about something! For one, it's tough to gauge what's the background and what's actual jumping material; many a time I found myself scraping down the sides of buildings, getting plaster all over my Hot Topic Ninja Pants. Secondly, I was confused by the presence of a mysterious blue substance that offered no resistance, yet allowed me to skip through it as if I were being supported by something. Hm!

Story: When the developers came up with the plot for Ninja Crusaders, there were undoubtedly celebratory paperclip shurikens all around the boardroom. See, psychotic face-eating aliens have invaded Earth, and the only thing that can stop them is badass, pajama-wearing ninjas. Nothing encompasses more prepubescent awesome than a ninja beating up aliens, except maybe a ninja that can fucking turn into a scorpion beating up aliens.


It's never explained how and/or why the ninjas can turn into a bunch of goofy animal forms, and quite frankly, I don't give a shit. This plot is pure genius, and I will be very disappointed in a certain island nation if it has yet to turn it into a 108-episode cartoon with its own library of fan-written homoerotica.

Gameplay: Did I mention the creatures you can turn into are called ninjanimals? Depending on which of the four weapons you've picked up, you can turn into a tiger, a scor... Actually, it doesn't matter beyond that, because only the tiger's increased speed and jumping power is actually useful. That's fortunate, because the command for transformation is so stupid it's impossible to discover ninjanimals on your own unless you're instructed by the mythical document known as 'the manual." It was a blessed day indeed when designers finally realized gamers were illiterate, and the Japanese interpretation of 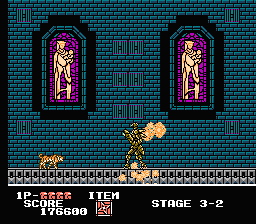 Your broker would like to inform you that your stock in MAJESTY has gone through the roof."a typical African-American" cordially invited me to hold down an ethereal O button to run in the middle of a terrorist attack.

So I was settling myself down for a typical platformer, with ten side-scrolling stages and a couple of yawn-worthy boss fights in between. I began by hopping about, dodging projectile-spewing enemies until I was in the proper position to murderize them. So far, so blah! Then I saw a group of aliens positioned perfectly so that, should I try to jump over one, the others' bullets would tear me to pieces. "A clever development!" I proclaimed joyously. But then a projectile just baaaaarely grazed my ear -a single one- and I watched aghast as my cuddly little tiger went up in smoke.

To quote my favorite blaster of aliens, "I have a bad feeling about this."

Difficulty: I guess I was spoiled by Disney's Aladdin as a kid, because apparently the one-hit KO was a common feature back in the day. Even so, Ninja Crusaders stands out in the frustration department, thanks to its ass-raping enemies. In addition to their formations, their abilities go from "moderately annoying" to "what the christ" as the game progresses. At first, they move slowly and shoot out manageable projectiles, but by the last four levels, their attacks are on acid and they often move too quickly for you to react, dive-bombing your kitty ass like the Sony CEO on a shiny penny. Worse still, their maddening level of respawn makes them multiply faster than shit on deviantart. Coupled with the insta-death, it makes Ninja Crusaders unplayable to anyone who doesn't feel like being shackled to a Famicon for their entire waking life.

Fun: "Only the hardest of hardcore oldschool-platform gamers need apply," boasts Captain Virginaut of the Starship Gamefaqs. That's all well and good, sweetie, except this game was made in 1990, when your kind mercifully did not yet exist. What did exist were hapless nine year olds who loved ninjas, and they did not ask for this. You know, had it the benefit of a health bar, I'd venture to say Ninja Crusaders could go from "Chinese acid torture" to "pleasantly challenging." Hell, it might even be fun, but I'm having trouble seeing the light through the charred pits that were once my eyes. Thanks, Lord Executioner Xi!

...so did no one try this game out? Obviously they beta'd it enough to determine the perfect way to arrange a triad of

Give me a fucking break. turd-spewing robots in a narrow corridor so that it's virtually impossible to avoid one without suiciding yourself on the others, so how did they somehow miss how fucking annoying it is? When the final boss takes someone who is pretty good at these games over twenty minutes to beat while cheating, you have a problem. Well, I guess if you're 'hardcore" and you want a painful-as-fuck challenge, Ninja Crusaders is as close as you're going to get to tabasco sauce in the urethra. But I, personally, don't, and I doubt little Joshie Hyperventilate down the street did either.

Defining Moment: While the final boss was awful, the third from the last was an ominous hint of Bad to Come. Like many of the previous bosses, the UFO Boss is a large blob of illustration that zooms from the edges of the screen and fires projectiles at you. Unlike previous bosses, though, it seems to have rudimentary AI. It knows where you are, and it knows where you have to jump to attack it. Therefore, it will shoot its sprawling projectiles in a formation that will predict where you will be and blow you to hell. If you entered the arena with any weapon but a shuriken -you can't swap them at will, of course!- you're fucked; but then again, you're fucked for picking up Ninja Crusaders in the first place.