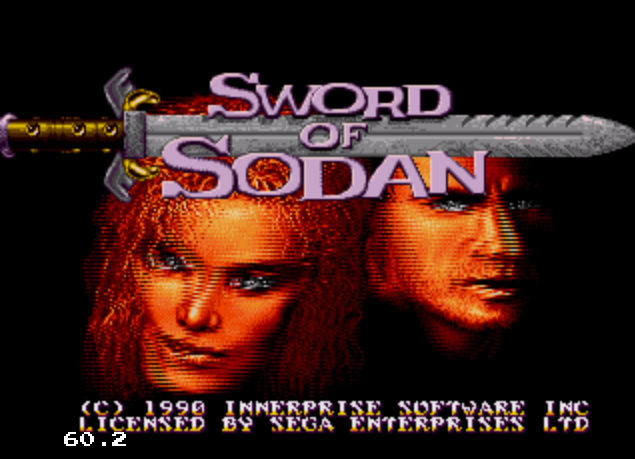 At a Glance: Hello, ladies! Now that Kevin "The Goblin" Wilson has ridden into the sunset of relative sanity, I will be his replacement, at least until I can convince Lowtax to release my loved ones from his cellar! In an attempt to break my spirit, he started me off with the horrible Sword of Sodan, a "game" legendary for being less of a game and more of an experiment in self-harm! Onward, nimrods! A new dawn awaits!

Know a terrible ROM? Tell me! 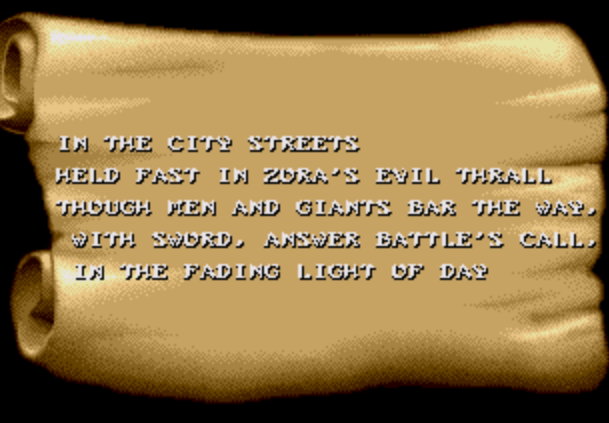 It is refreshing to see the fine art of poetry represented in the gaming community!Story: Sword of Sodan seems vaguely medieval, but really it presents you with no logical reason for putting yourself through repeated agony. I will nevertheless surmise what I can. You may choose to play as either a SEARS underwear model or that slutty LARPer chick that ruins all your D&D games. Whichever you are, it causes legions of sexually frustrated jam fetishists to attack you with phallic symbols, lead by a grotesquely obese fellow named "Zora," who I guess is a fan of African-American literature. Your only defense is to repeatedly stab your attackers in their private areas; should you fail, they will overwhelm you and smear raspberry jelly all over your exposed, heaving chest. And let me tell you: There's a lot of raspberry jelly in this game.

Gameplay: At first, I thought you held down the right button on the d-pad, jabbing C and praying to a thousand dead gods that you'll spray more poorly-rendered blood than the other guys. As it happens, there is some strategy involved, wherein you master trendy moves such as the endless thrust and the crotch-stab. Unfortunately, there is little to no logic in choosing which moves to use when, and the control scheme is simply awful. You know a game is a piece of work when you have to use an FAQ to figure out how to turn the hell around.

More like "Sword of Sexy!" Sodan's creators must have sensed "flailing at random until your chest bursts" might not be the most marketable of experiences, so they threw in another element: Potions! There are four different types of potions in the game, which can either be drunk alone or combined to make more better potions. Sometimes, you will need to use a certain combination of potions to progress further -how exciting! Well, there are two problems with this:

There are a limited number of enemies per level, and you can only carry four potions at a time. Therefore, it is extremely likely that you'll be stuck at the Great Herpes Pit in Level 6 without the proper combination to make the Potion of Genital Protection! With no way whatsoever of getting it! Yay! 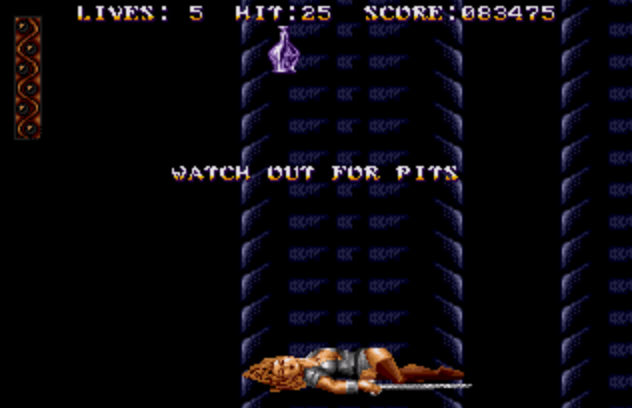 No, fuck YOU.Graphics: I may have been a little kid when I had a Genesis, but I remember the cheerful graphics of more child-friendly games, such as Sonic the Hedgehog, Disney's The Lion King, and Concentration Camp Jamboree. I suppose I have to concede that for the time, the sprites themselves aren't that horrible, but the animation is so abysmal that any praise for the graphics will have to be ripped against my will from my deathly-still larynx. The characters' legs move with the same grace and fluidity as those of Franklin Delano Roosevelt, provided he's been brought back from the dead by a particularly inept necromancer. The intent of the game designers was to require you to hop, skip, and jump around various homicidal morons, but the quality of the animation makes this virtually impossible. The bad animation even ruins the "side-scrolling" element, as the game's screen inches along in jerky, pathetic motions, leaving Busty McMetalTits humping the right edge of the screen in frustration.

Difficulty: The game has two difficulty settings: "Easy" or "Normal." Unfortunately, this turns out to be about as courteous as a creepy old uncle asking if you would like your rape "Lubed" or "With Spikes." The shitty control scheme of this game makes even Easy Mode ridiculous, and Normal Mode serves only as a convenient implement to rupture your will to live. The cards are stacked against you from the beginning, and the random allocation of potions means that, even if you manage to triumph over every helping of pain this game throws at you, you will often have no choice but to reset. 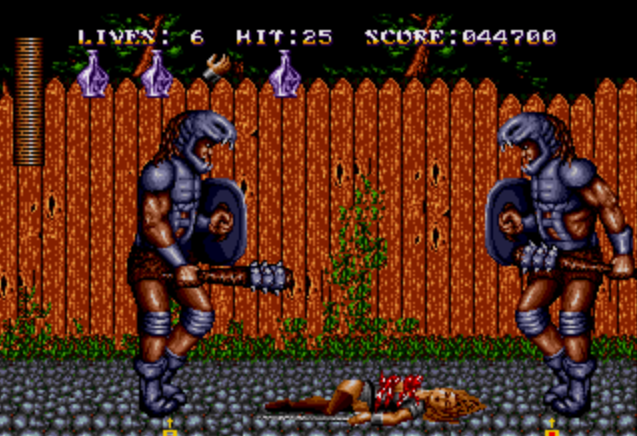 Like a girl at a Goon Meet.Fun: As mentioned before, there is some skill involved. However, even the first level requires mastery of the crappy controls, and the game is just too damn boring to warrant enough repeated attempts to get "good" at it. Nevertheless, the game's makers apparently anticipated the advent of masochistic gamers, because as soon as you do get the excuse for controls down, the levels literally become impossible. It's like practicing for years to perfect a difficult guitar solo to earn the reward of the strings snapping off and strangling your firstborn child. If that's not enticing, I don't know what is!

Defining Moment: Level Four, "The Zombie Level," wherein the above becomes apparent. An endless parade of poorly-animated zombies shuffles from the right side of the screen, pawing at you and vomiting up their entrails as high speed projectiles. It's impossible to jump over them, and they're infinite in number. At first I tried killing them, but not only did they have high health, they would explode in poorly-animated stars that cut my health in half. Basically, the "strategy" for this level is to let them chew through you, scores at a time, hopping up and down like a speed addict on a trampoline in a futile attempt to lessen the damage. Ninety-nine times out of a hundred, this is what's going to happen anyway, which I find is a pretty damn good analogy for trying to do anything with this game cartridge other than using it to break in a shiny new pair of stompin' boots.