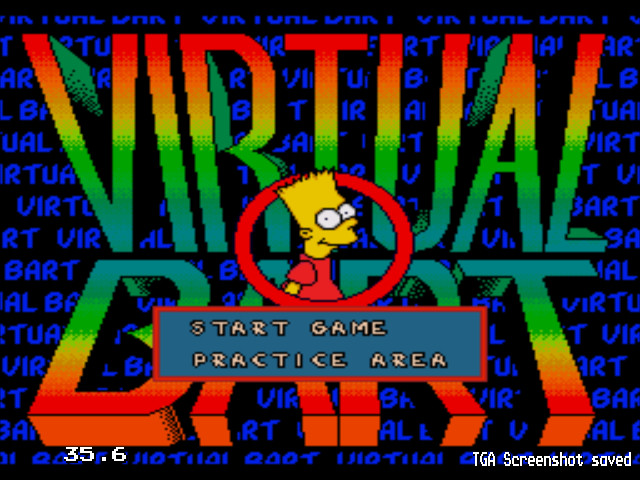 At a Glance: Spider Pig! Spider Pig! I'm your six-year-old nephew and I'm about to learn that vocal chords are a privilege, not a right! I don't know why The Simpsons still exists. We've all had good times with them, but let's be reasonable: At this point, it's like hooking the maggot-ridden corpse of Fluffy McWhiskersons up to florist wires, then prancing about with your ghoulish marionette and insisting Kitty Still Loves You. It's the circle of life, man. Let it go. 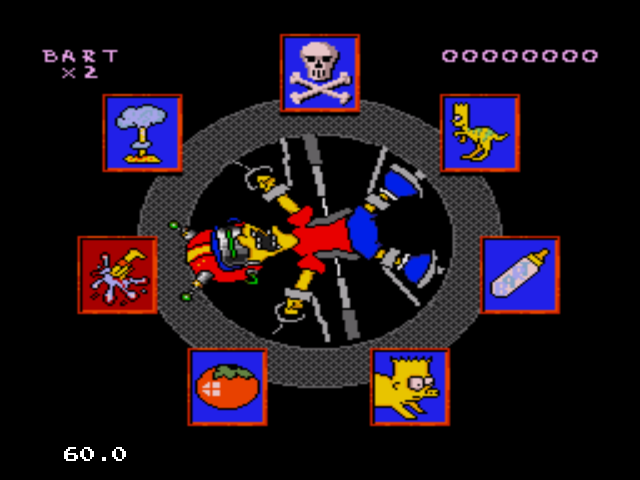 I am willing to bet there is homoerotic fanfiction involving this, but all of the comedy gold on Rick Santorum's hard drive couldn't make me look for it.See, the folks who programmed Virtual Bart took time out from their busy schedules of jamming power drills into each other's ear canals to crap out six vaguely Simpsons-related mini-games. But instead of being honest and marketing this game as "Hey it's like The Simpsons, only bad," they came up with the idea that this is a VIRTUAL REALITY exhibit at a science fair, despite the ACTUAL REALITY that these games consist of such state-of-the-art activities as "throwing tomatoes."

Gameplay: Now I shall describe the odor and texture of six exquisite shits!

Dinosaur: One of two levels wherein you play as a hideous abortion of Bart, you run around trying to murder the innocent denizens of Cave-Springfield, because Bret K Sampson is just that bad of a motherfucker. You'll probably be slaughtered by your little sisters armed with blowguns, though, because dino-Bart has the muscle control and depth perception of an epileptic in full iPod-winning mode.

Babby: The level wherein you play as what should have been an abortion, Little Bart swings through tree branches that, like the platforms in dino-land, are apparently coated with butter, making them impossible to get a hold of. Squirrels scurry 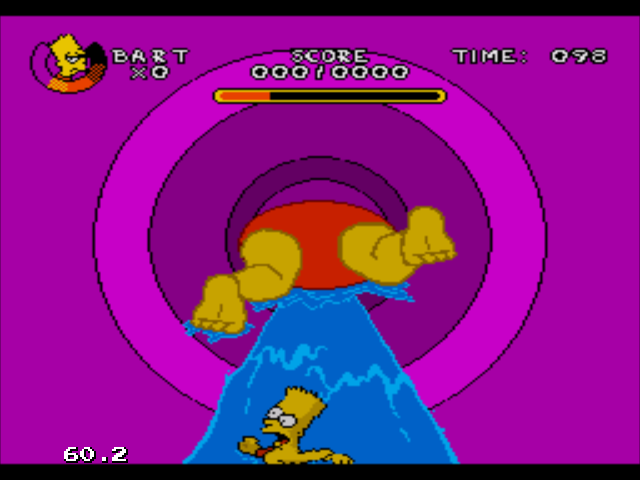 Matt Groening's "The Simpsons" is well-known for its sophisticated level of humor.around trying to kill you, and for this benevolent act I nominate them for the Nobel Peace Prize.

Pig Atrocity: The other platformer-abortion, this game wins the gold in both the Creepy and Insensitive Departments, as you play a Pig-Bart abomination in renowned Jew Krusty the Clown's pork factory. An avant garde approach to gaming is taken here with "the pig bounce," which revolutionary presents a move that routinely does not work.

Tomato Doom: An exciting virtual simulation of throwing fruit at children, this game relies entirely on a cutting edge 3D presentation of depth! Too bad that edge cuts about as well as a high school atheist's wit, so for the same level of fun, I recommend you bash your head repeatedly against a surface as hard as my bitter heart. You win!

Water Slide: You know, it's revealed that the VR project was not made by Bart, so why does he bump into every hepatitis patient in Springfield except for himself? Surely it couldn't be because the developers knew they could slap a Simpsons logo on a regurgitated dog turd and people would buy it, context-be-damned! Anyway, you are transported through a series of tubes, dodging cretins by pushing left and right on the D-Pad. Sometimes, you can even press A! Excitement!

Biking: Nothing says whimsical like a nuclear holocaust! You race on your bike as quickly as you can, lobbing 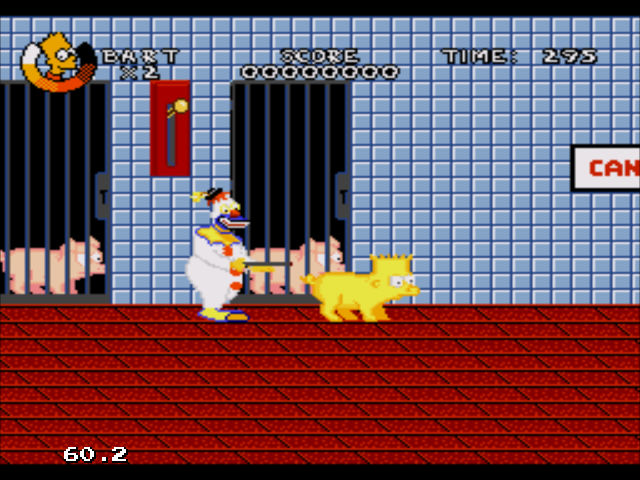 Seriously, what the fuck?water balloons at your enemies. It is allegedly possible to reach the end, but whenever Otto appeared it was Insta-Armageddon for me. So I guess it's kind of like SkiFri, which incidentally is the sole reason for my nihilistic worldview today.

Graphics: Hard to say, given the two-dimensional nature of the show, but I'm going to have to go with "crap." The Genesis was famed for its quasi-3D sprites, which Virtual Bart barely even attempts. They could use the excuse "it's a cartoon," but they also often neglect to put the telltale black outlines on the characters, making them look like they're about to bleed into the unremarkable backgrounds. Amazingly, the game sometimes attempts to render depth, which is the kind of tenacity required to apply to Harvard after being rejected from Potatoloins County Community College.

Sound: It has voice acting -maybe even by the real Simpsons cast! Except it consists solely of Homer shouting 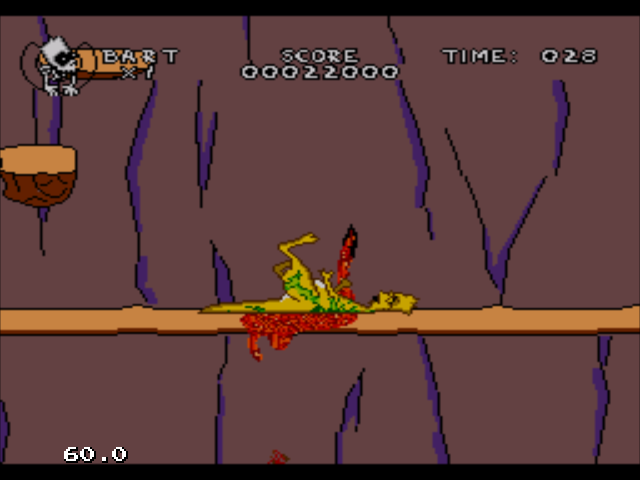 THIS IMAGE IS SYMBOLIC OF THE PAIN EXPERIENCED BY MILLIONS OF Pfffffffffffffffffsssssstttrlbjargaaga the title and Nancy Cartwright screeching three or four soundbytes that were 1994's lolcats in terms of obnoxious cliche. There's some music, but it's repetitive, and when something sounds like the death-rattle of a chipmunk with emphysema, more of the same is the last thing you want.

Fun: Like Double Dare, this is another case of someone attempting to cash in on a popular franchise, while a) cleverly removing everything that made the original enjoyable, in this case humor and b) neglecting to make the gameplay anything that could be mistaken for fun by a drunk in a dark room. Only one "joke" even made me smile, and the rest of it is so horrible that I immediately hated myself for it. With all references to The Simpsons removed, we would be left with a game that could only entertain someone with downs syndrome, and even then just from seeing how many cartridges he could shove down his throat.

Defining moment: I know Bart's appeal stems from the fact he's a wackily undisciplined little brat, but there was something about bludgeoning my mother to death for a tasty popsicle in the dinosaur level that really sang to me. Bart may be a Scientologist, but isn't that a bit horrible, even for him? The Simpsons may suck lately, but isn't this a bit awful, even for it? The author may have to blame somebody, but isn't sewing ice weasels into Matt Groening's chest cavity a bit extreme, even for her?