The Sequel To Barkley, Shut Up And Jam: Gaiden Is Coming And It Is Called The Magical Realm of Tir na Nog - Escape From Necron 7: Revenge of Cuchulainn - The Official Game of the Movie: Chapter 2 of the Hoopz Barkley SaGa

This is the cover art for BioShock Infinite: 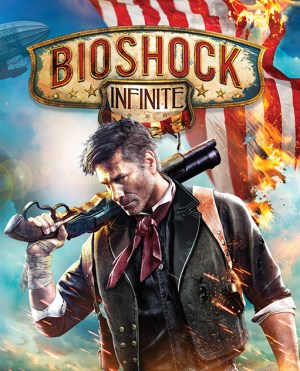 BioShock Infinite is really weird. There's no movement at all. You pretty much just stand around and contemplate your rugged Nathan Drake-ish good looks. Limited mobility in a shooter isn't so bad as long as the gunplay makes up for it. It doesn't. Your gun (you only get one weapon, though it's admittedly a really sweet looking shotgun) is resting over your shoulder. The crosshair isn't even on your screen, it's constantly off to your left and upside down. Thankfully your finger is always on the trigger so you can shoot very quickly. You just can't see where your bullets are going. Also, there are no enemies. There is, however, some sort of explosion of sparks that's constantly going off a few feet in front of your knees and to the left. It might be something you shot but you'll never know. Sometimes you can see a part of a blimp. I thought the burning American flag was good symbolism for conflicting political factions in America. 8/10

Sega-owned Creative Assembly has obtained the rights to the Warhammer fantasy world. Or is it realm? I think worlds become realms when they're fantasy. While THQ retains its hold on Warhammer 40K (allowing them to crank out more Dawn Of War and Space Marine games), the creators of the Total War series will finally have a chance to make the game that tabletop fans have been dreaming about for years. No, Mark Of Chaos doesn't count. If you are unfamiliar with the Warhammer fantasy universe, prepare yourself for battlefields swarming with monk rats, lobster claw centurions, skeleton pharaohs on golden chariots, and ogres wielding cannons like rifles. If you are familiar with Warhammer, prepare to second guess every element that changes as a result of the transition from tabletop to video game.

After 24 years in print, Nintendo Power came to an end this month. Their final cover featured a sculpted scene from New Super Mario Bros. U, which doubled as a nod to the very first issue's fucked up Super Mario Bros. Play-Doh nightmare. Nintendo Power considered their final issue "brilliant" and "a masterpiece", a "sensational experience that fans won't want to miss" while other publications gave it slightly less enthusiastic reviews.

Far Cry 3 is basically Far Cry 2 with Assassin's Creed-themed training wheels, and that's as good and bad as it sounds.

Where the shooting in Far Cry 2 was unpredictable and tense, this time around your bullets always go exactly where you aim and your gun never jams. Everything is colorful and visually inviting. Concepts are made abundantly clear, sometimes smacking you over the head long after you've gotten the point. If you hated Far Cry 2's complex web of mechanics that combined to make you feel like you were struggling to overcome the odds in an oppressive environment, you'll love Far Cry 3. It's a shooter with open world elements and it is playable as hell.

The problem is that it has no idea what it wants to be, aside from really slick. There were reasons for the frustrating moments in Far Cry 2. Even if those momentary setbacks rubbed you the wrong way, they were part of a considered whole. Far Cry 3 wants to make everything into a straightforward mechanic with no pushback. As a result any given moment sure feels nice, but there's nothing satisfying about the way all the parts fit together. It follows the Assassin's Creed trend of becoming bigger and more technically impressive for the sake of being a spectacle. If Far Cry 2 was Die Hard, Far Cry 3 is the Transformers movie.

Yes, I actually made a movie analogy. That's how much I care about Far Cry 2. And Die Hard.

Far Cry 3
This would have scored higher if the dubstep (and frankly all the audio) had been replaced by a Prince re-recording of "When Doves Fly" featuring the lyric "this is what it sounds like when three fars cry". 8/10