The Intense and Strange Cover Art of TORG

TORG was a cult '90s game series from West End Games which fashioned itself as an alternative to Dungeons & Dragons and every other game. It came out at the exact same time as Rifts and the similarities between the two games were striking. Both revolved around multiple dimensions intruding into earth, both gathered many popular RPG genres and tropes into one game system, and both featured an emphasis on action. In TORG, like Rifts, it was not unusual to see a gun-wielding cyber-samurai and a spell-slinging wizard fighting a fairytale monster. But there were differences between the systems. Freed of the Siembieda obsession with giant robots and power armor, the TORG world became less cartoonish and more like a dark parody of film genres. The wild cover artwork reflected this 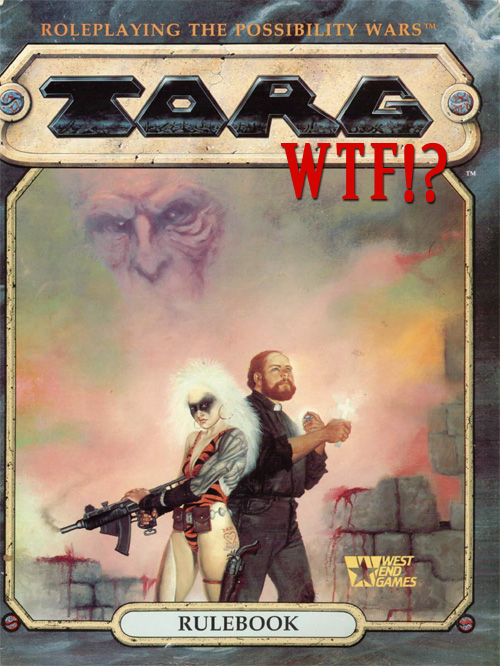 Zack: I never played TORG. Was it pretty much like Rifts?

Steve: This cover gives you a pretty good idea. It was like if Rifts was made by the people who made Warhammer. It was all dark and gnarly but it was too goofy to be taken seriously.

Zack: So like the old Rogue Trader. Was it any good?

Steve: Yeah, maybe that's not fair. I only played it a couple times. I didn't like the West End Games system. The only one I really played much was Star Wars and the system sucked for that too but it was all we had to play Star Wars.

Zack: Hard times. We all have to make sacrifices to pretend to be Boba Fett.

Steve: I was a wookie named Geoff.

Zack: That doesn't sound like a legit wookie name.

Steve: He was orphaned by a jedi and raised on Dantooine by farmers, only to discover he was a powerful jedi too.

Zack: So he was pretty much Luke Skywalker covered in a head-to-toe beard.