A Plague Of Day Z Stories

Day Z is a heck of a thing. With a unique emphasis on survival and the specter of permadeath constantly hanging over your head, a few minutes with this ARMA 2 mod can be more memorable than the entirety of a modern explosion-filled FPS campaign. That's not to suggest that the mod is without flaws, as it's often unpleasant in spots where it sets out to be difficult. Still, there is something unique in being a powerless weenie for several hours, scrounging for beans and water before coming across a decent gun. 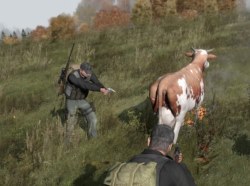 As the game caught on, first person accounts sprung up from people that felt the need to share why this was so different. In time, it began to seem that people were going into the game looking for minor encounters to turn into stories of their own.

Not that there's anything wrong with that. Anything that gets people to express themselves creatively is fantastic. All those outside stories have, however, impacted how a lot of people approach the game - just as much as anything that's actually in the mod itself.

What if people were just as eager to whittle prose from their experiences with other games?

Putting The Pieces Together

Emptiness. Everywhere I look, there is only the void. Loneliness and dread spar with one another as I keep a weary eye on my surroundings. Then, from up above, it comes.

The shape. Massive. All right angles and perfectly straight lines. This is not the result of nature. This is something else altogether. Something about it quells the storm in my head, bringing forth a simple thought: The number four. What's the significance? I do not know. I do not have the time. For now, all I have time for is action.

Mustering all my will, I tentatively gesture toward the falling block. It moves to the left. No, that's not right. It doesn't move the way things should. It simply ceases existing in one place and arrives in another. No perceptible movement, no blurry streaks left behind by even the fastest object. It's almost like teleportation. What is it? What is going on here?

The block continues to fall. Going on instinct, I allow my mind to follow a spiral-like pattern and imprint the thought onto the object. It rotates 90 degrees. Stunned by my own action, I do nothing as the block finishes its descent. It slams home with the floor. There is no shaking. No dust is displaced in this impossibly sterile environment. No cracks form in either floor or block.

Just as I begin to draw a breath of relief, movement catches my eye. High up above, another object appears.

Where the first block was a simple square, this new one is different. Different in color, for one, but that seems less important than the shape: It is a large "L". Then it hits me, both blocks have been divided into subtle quadrants. They appear to be large blocks made up of smaller segments, also blocks. The implications are enough to send one spinning, but once again I must act.

With a few gestures - which come all too easily to me now, I realize with a shudder - I rotate the new block and position it above the settled form of the original. Gravity works its slow magic on the L-shaped block. Wait... that's not right. These should be falling much more quickly. What foul sorcery is at play here?

No sooner does the thought enter my brain than the impossible happens. The new block snaps down into its place, in one instant covering a distance that would have taken ten seconds at its natural rate. How did it move so quickly? Was I responsible again?

I reach out to the L-shaped block and attempt to test my powers. It does not move. It seems that the strange force linking individual segments in each block also links the blocks themselves. Mystery upon mystery.

Then it dawns on me. Music. A jaunty tune had been playing this whole time. I had been too preoccupied with my surroundings to realize it. Now, the tempo was increasing. I frowned. What could that mean?

Suddenly, more movement above. A new shape. A monolith, one long column made up of four segments. Moving faster than the others had. As I tense up, clenching my fists in anticipation, a thought dawns on me: What happens if the blocks stack up so high that they reach the ceiling? Would it mean salvation, or something else entirely?

Endless Space
The most enjoyable strategy game I've played in years, deserving of a purchase if only for the fact that one race is cloned from a vain man named Horatio. 10/10

The Walking Dead Episode Two
The only way this series could lose its grip on every Game Of The Year award is if the remaining episodes are just renamed Jurassic Park installments, and even then it would probably be more deserving than anything else out there. 9/10

Spec Ops: The Line
Since it was genuinely bold for this game to go down the Apocalypse Now route, does that make this the Citizen Kane of Apocalypse Now games or does it make every other game the Hot Shots Part Deux of games? 7/10

Lego Batman 2
If you love this series you probably watched the same movie every single day when you were a kid. 5/10

The Amazing Spider-Man
A little bit of the open world Spider-Man games of years past, a little bit of Arkham Asylum/City, and not quite enough of either to be particularly memorable. 6/10