Sometimes you come to a chapter break in a book or a movie's end credits and you blink, remembering your surroundings. It's very rare for me to lose myself in a video game in such a way. It happened with Grim Fandango, Psychonauts, Portal, the Half-Life games, and now The Walking Dead.

Telltale has almost nonchalantly achieved what so many "cinematic" games set out to deliver - a well-paced series of engrossing moments that play to the strengths of video games, not a treadmill of hollow combat encounters strung together by tone deaf cutscenes that imitate Hollywood.

So what is this game, aside from a source of uncharacteristic hyperbole?

At its core, The Walking Dead is about making decisions. For the most part this takes the form of conversations with timed responses and branching paths, like Alpha Protocol. Unlike that game's focus on a broad web of intrigue, however, your decisions here focus on cultivating personal relationships that directly impact survival scenarios and bonds of trust.

How much do you want to reveal about your past? Should you comfort someone that just put the group at risk, or berate them so that they'll be more cautious in the future? Will you challenge a leader's decision at the risk of causing a rift? These are the themes that are playing out, one small bit of dialog at a time. Your choices carve out paths that feel organic and meaningful, each with their own consequences, none resulting in a fail state.

Since this is based upon the Walking Dead comics, you will run into a zombie or two. Occupational hazard. Each encounter fits into a specific part of the story, requires a different approach, and spurs you into making quick decisions - such as which tool to reach for and who (if anyone) to save at the risk of your own life. There isn't a universal "kill zombie" mode. Instead, there is panic, followed by tension as you assess the situation and decide what to do, then the act of aiming a blow that lands in an uncomfortable and gory act of brutality. As a result, each bit of action is intimate and memorable. It never feels detached from the story. It is, instead, an ugly and unsettling driving force. 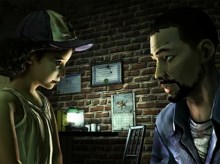 The pacing complements the tone that the game works so hard to establish. A lot of ground is covered, in terms of both story and scenery. You are constantly moving forward, taking part in conversations and scanning your surroundings. The puzzles you encounter aren't abstract things that grind the game to a halt, but short and relatively straightforward sequences that revolve around clear goals related to your survival. They provide you with much-needed moments of exploration and relative calm, but the horror of your situation is never far removed.

Understandably, there are going to be people with reservations about this game. Telltale is mostly known for their traditional adventure games and the poorly received Jurassic Park. Although The Walking Dead television show is very different from the comic this is based upon, it is probably known by more people and it has a lot of problems with plotting and abysmal characterization. On top of all this, zombies as a concept have reached a saturation point in our culture, becoming the target of a rising backlash.

Hopefully, people see past all that. This is new and genuinely innovative ground for Telltale. The writing here is far better than the show, better than most games in fact. If you're tired of zombies, get over it or eat a million undead buttholes. Good zombie fiction is still as good as it ever was, it's just been lost in a sea of poor tag-a-longs. This is the good stuff. It hits all the right touchstones of the genre's classics while being clever in its own way.

I'm not going to assume that everyone will have the same reaction to this game as I did, but it seemingly came out of nowhere to create a niche I would never have imagined playing. For this first time in quite a while I'm excited to see not only where a series goes, but how its genre builds upon its lessons.

The Walking Dead Episode 1
I already talked about the game enough, so I'll use this place to remind you that for me a 10/10 isn't a perfect game, but an exceptional thing that I enjoyed from beginning to end. 10/10

Tales Of Graces F
This doesn't necessarily learn a lot from Xenoblade's attempt to pull jRPGs into the present, but it is dense, long, and quirky enough to be exactly the sort of game that you either find comforting or stereotypically annoying. 7/10