Two Changes That Would Fix Star Wars: The Old Republic

Flawed as it may be, Star Wars: The Old Republic actually has a lot to offer.

Its class stories delve into exactly the sort of pulpy adventures that fit the tone of the setting. Skills are thematically appropriate and visually interesting. When the graphics resemble the concept art instead of half-assed video game Kenner dolls in Swampworld, the game can look downright unique and striking.

The problem is that getting to the good stuff is tedious. Fun content is the dangling carrot that beckons you through hours of repetition and long travel times. It should be the driving force at the center of every moment of the game.

As The Old Republic condenses its servers and considers moving toward a free-to-play model, I am going to humbly suggest two changes that would turn the entire game around. There would still be lots of little issues, of course, but these two things would get me to come back to the game for many months to come. 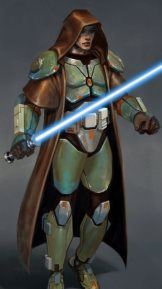 Woah, can't wait to play as that dude!The game's defining characteristic - story - works way better than I could have imagined. It's not super deep, but it gives actual context to your character's actions. I want to experience all of that. All of it. Every class.

Right now, the class content represents maybe 20% of the stuff that you have to do on your treadmill to the level cap. And that's being generous. Most of your time is spent doing side quests. It's not that these side quests are inherently bad. They give each planet flavor, after all. They're just not the sort of thing you want to do more than once.

Ideally, you would take your first character all the way through the game, then start as a new class and level entirely by playing class content which awards accelerated XP. Nothing else. Why repeat all the stuff you've already done?

Sure, this would mean that people would be hitting the max level with multiple characters quickly - but they would be having way more fun. They'd be much more likely to actually stick around and experience each and every class.

BioWare is moving things in this direction a little bit, but it's not enough. Right now you can get to level 50 with one character, then grind for money and some goofy "legacy points" in order to buy a slight XP increase for your next character. Of course, this first amount is nowhere near enough to level exclusively through class content. If you want to do that, you'll have to play through the game multiple times to get enough legacy points. By then, you'll probably be burned out.

Did I click the right class? Did I buy the right game?Players shouldn't have to throw themselves against the jagged rocks of a timesink for the privilege of skipping repetitive content. The game isn't being served by tossing down roadblocks. That's short-sighted. It only makes an average person's experience unrewarding, leaving them unlikely to return.

One of The Old Republic's coolest features is the companion system. Throughout the story, you run into NPCs that join your crew and fight alongside you as sophisticated versions of pets. It's really quite clever.

The problem is that these companions are broken down into very specific and rigid combat roles. This means that if you're a melee DPS guy and you really need a healer, you might not get one until your mid 30s. It also means that your choice of a companion is based more upon utility than their personality or appearance. Maybe you like having a droid around more than anyone else, but he just doesn't match with your playstyle. Now two completely different impulses are at odds for no good reason.

What should happen? It's pretty simple, really. All companions should share a pool of common abilities and start with identical stats. Each and every one should have a set of "stances", allowing them to become any class that you need them to be at a moment's notice.

There's no reason why this shouldn't be in place. I'm honestly amazed that the game didn't launch that way. Make all the companions equally effective. Let us pick our favorites.

Civilization V: Gods & Kings
Doesn't quite change the game like Beyond The Sword, which is to say that it will only result in me playing for a hundred additional hours instead of two hundred. 8/10

Steel Battallion: Heavy Armor
I had almost forgotten what a completely broken game felt like, thanks for reminding me! 1/10

Lollipop Chainsaw
Totally crazy in the most boring, calculated, and shallow ways. 5/10