0:34 - The dude drops his weight. (Not pictured, too exciting for readers with heart problems)

0:35 - A shiny spinning Chinese fingertrap with a Dune sandworm's digestive tract spins in the air as bolts of electricity crackle all over the place. 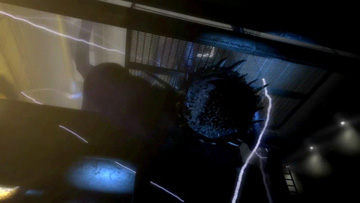 Is it doing this because it's happy? Angry? Bored?

We finally see something resembling a real background: A dark - yet shiny - rectangular sewer or industrial complex composed of large pipes and grated walkways. I think there's a ladder in there, too. Now we're pushing the game design envelope. 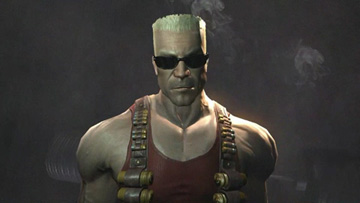 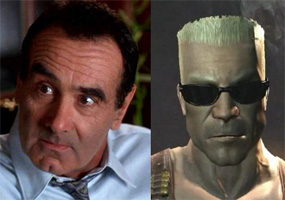 0:48 - Duke takes a puff from his cigar and blows it toward the camera like a horribly modeled irrelevant character blowing smoke toward a camera. The smoke forms a radioactive symbol. Hey, there was a radioactive symbol in Duke Nukem 3D! It's awesome because it's something we recognize!

The smoke gives way as a tattered American flag with the words "Duke Nukem Forever" enters the shot.

0:56 - The flag blows up, as flags do from time to time. I'm surprised this freak accident made it into the final edit. 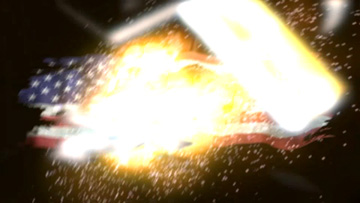 0:58 - A guy that sounds nothing like Duke Nukem actually says the following while the screen is black (so the facial animation system can't be made fun of, if it exists): "I'm looking for some alien toilet to park my bricks. Who's first?"

Guess they already used up all the good lines from They Live and the Evil Dead series, huh? Coming up with original material can be hard, but I'll give them a few suggestions free of charge:

"I'm gonna pump you so full of lead that if Superman tried to look through you, he totally couldn't because his x-ray vision can't see through lead."

"You're so ugly that I can't tell if that's your face I just kicked - or your ass!"

"What is this alien goop? I haven't stepped in something this wet since I tripped and fell in your mother's baby hole - and kicked your ass when you were a baby!"

1:01 - The words Stay Tuned inform us that if we want to see which alien toilet will be the first recipient of Duke Nukem's bricks, we should stay tuned.

NiGHTS: Journey Of Dreams
The controls may be awkward and some of the levels may be lackluster, but learning about the true meaning and friendship and hanging out with little kids are way better here than they were in Gears Of War. 6/10

Soul Calibur Legends
Turning this beloved fighting series into a hack-and-slash action game is about as necessary and compelling as a Duck Hunt flight simulator. 4/10

Swashbucklers: Blue Vs. Grey
Because Sid Meier's Pirates! would have been perfect if it had only included a little bit more of the Civil War and anime. 5/10

Final Fantasy XII: Revenant Wings
Hopefully this will have more of a positive effect on the Revenant Wings industry than Square's last outing had in the now-defunct Advent Children market. 8/10

Godzilla Unleashed: Double Smash
If an alien race visits Earth long after we've died out and finds this game along with Hollywood's Godzilla movie, they'll probably vaporize the planet just to be safe. 0/10