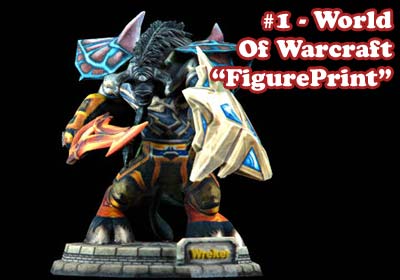 If the gamer in your life plays games, there's a good chance they're into World Of Warcraft. For only $99 you can turn their ingame character into a real action figure that cannot change poses or be removed from its base. You don't have to have taste to appreciate this art.

Now the gamer in your life can have something tangible to show for all the months he or she has spent in a virtual world besides love handles and sunken eyes!

Bladestorm: The Hundred Years' War
Wears out its welcome about ten minutes into year one. 4/10

Blacksite: Area 51
Part of the government's sinister plan to place anyone with a passing interest in Area 51 into a deep slumber from which they may never return. 6/10

Soldier Of Fortune: Payback
Shooting chunks off of your enemy's body used to be enough to sell a game, but today's distinguished audience needs more, like the ability to roll those chunks up into a progressively larger ball. 4/10

Geometry Wars: Galaxies
A good game that doesn't need to trick people with a title that's one word away from the most exciting and successful MMORPG of our time. 8/10

The Golden Compass
If the movie and books don't convince people that there is no God, five minutes with this game should do it. 3/10

Jenga World Tour
If your game is just about a pile of blocks and those blocks have weird clipping and physics problems, you've just earned yourself the Nintendo seal of approval. 2/10

Ghost Squad
If guilty pleasures were criminal, the unlockable mode where you shoot girls in bikinis with waterguns would probably warrant the death penalty. 7/10

Dawn Of Magic
The Diablo series has something to be afraid of - being held responsible for all the horrible clones that they've influenced. 2/10

Next Life
On a scale ranging from Second Life to Half-Life, this falls about ten notches below the former. 4/10

Aliens Vs. Predator: Requiem
Easier than spotting phallic symbols in H.R. Giger's Alien designs, and nowhere near as exciting. 4/10

Contra 4
Some things never change, like the pure fun of shooting at aliens and communists with laserguns or the uncomfortable pause when I tell someone what I do for a living. 8/10