ROMs And Abandonware: Know The Law!

Abandonware is legally defined as "cool games that you are allowed to download for free starting on the fifth anniversary of their release".

It's legal to download a ROM and play it as much as you want, provided you delete it after 48 hours. If you have a valid doctor's note, however, you can keep the ROM on your hard drive for up to 72 hours. 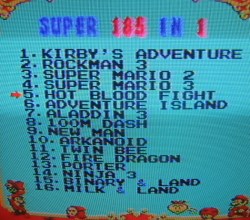 As much as I'd like to see Milk & Land, I'd give anything to be New Man right now.Abandonware is legally defined as "a floppy disk copy of Sopwith that someone literally abandoned on a park bench". No other games. Just Sopwith.

You are not allowed to resell ROMs under any condition. It is absolutely illegal. What you can do, though, is abandon ROMs for others to come across. Anyone who discovers a ROM that has been abandoned is granted ownership of that game for all eternity. If you personally rediscover a ROM that you previously abandoned, you do not have the same rights that a third party would. In such an instance, you would not be allowed to keep the ROM forever. Thankfully, your 48 hour timer would reset upon discovering a ROM that you had previously abandoned.

Abandonware is legally defined as "games that you want but you don't like the developers very much, or maybe you spent all of your money on overpriced hardware and now you have some karma to spare so go ahead and download as much as you want without paying".

The legality of emulated arcade games is a tricky subject. If you have spent more than $5 in quarters or tokens playing the actual arcade machine then you are entitled to a free copy of the game. If you made a really sweet MAME cabinet you are allowed to download every arcade game ever made. Things get complicated when your MAME cabinet is not, in fact, sweet. Let's say you just took an old computer and monitor, hooked up a gamepad, and stuck the whole thing in a cardboard box. There aren't even holes in the box for the screen and controls. It's just tipped over so the open side of the box is facing forward, with the flaps pulled back and maybe held in place with some tape. You are not allowed to download shit.

Abandonware is legally defined as "games that are okay to download because you couldn't find them with a cursory glance at the shelf in Best Buy".

ROMs are only legal if they are downloaded from reputable websites. These can be distinguished by multiple instances of the word "COOL" and by download pages with fewer than five misleading download graphic buttons.

Abandonware is legally defined as "Whatever you want it to mean, dude. We're all transitory beings passing through an indifferent universe. All that you experience and invest meaning into will be free from your delusional sense of ownership in eighty years. Get that Full Throttle. Get it and enjoy it."

If you don't plan on playing any of the ROMs you download, it is within your constitutional rights to go hog wild and grab as many as you want. You don't have to delete them, either. It's perfectly legal to fill a hard drive measured in terabytes. Put them in folders. Sort them by platform, year, genre, title. Rub your computer greedily like a mighty dragon caressing its hoard of gold and jewels.

Abandonware is legally defined as "Pocky & Rocky, not Pocky & Pocky".

It is illegal to transport ROMs across state lines in the US. There is just one exception. If you are transporting Cruis'n USA and your vehicle is, in fact, cruis'n across the USA the law cannot touch you.

The Wolf Among Us: Episode 1
A reviewer has probably written something along the lines of "things take a hairy turn, but you'll have a howlin' good time" and clearly I am no better than they are. 9/10

The Stanley Parable
This doesn't even have a jump button or a proper gun so technically I shouldn't be reviewing it. 8/10

Sonic: Lost World
It's Mario Galaxy, if the galaxy was listlessly and challenges weren't fun things to overcome, but annoying roadblocks that made your interaction with the game feel like garbage. 5/10