Overview: A group of numbskulled teens mill about randomly in a thinly veiled attempt to be the first one decapitated by a lumbering, oddly invulnerable alien bent on planetary domination.

The Case For: Tolerable opening scene

The Case Against: By opening, I mean it lets the rest of the movie in.

There's a lot to like about Predator Island. Ehhh to be honest there's, well, there's a few things to like about it as a film. Okay, there is one thing to like about this flick: the name. PREDATOR ISLAND. Close your eyes, gentle reader, and think of a PREDATOR ISLAND. What do you see? A lush, verdant tropical paradise aswarm with malevolent mutant tiger raptors? A bleak and bleach-white beachfront spotted a stomach-churning bluish-black with blood, spilled by the ponderous claws of a mysterious behemoth worm from the netherworlds that blots out the moon as it lurches forward? Or maybe a deceptively peaceful vacation resort, where the staff seems a little too friendly and guests keep washing up on the morning tide?

Or perhaps, just perhaps, you envision a nondescript washed-out blur of what looks like somebody's backyard, populated by irritating twenty-something no-name actors who take time from their busy schedule of insulting each other to run around like retards and elicit screams of relief from the audience when they're finally put out of their whiny, petulant misery. Have I got a DVD for you, Movie Lover! Predator Island is a straight-to-DVD-and-from-there-straight-to-your-recycling-bin disaster of a movie directed by Steven Charles Castle. The only other director I can think of off the top of my head with three fancy names is Francis Ford Coppola, who is not likely to lose any sleep over the prospect of Mr. Castle usurping his spot as a premier American filmmaker.

The movie starts promisingly enough with a Blair Witch Project-esque series of camcorder snippets. A group of six kids hops on a l'il boat to sail around the bay and party. The dialogue is believably loose, and I felt my heart sink as the fear crept in that Predator Island would actually be somewhat watchable, and that I would have to shell out yet another hard-earned $2.49 for a flick that really did suck. Mercifully things go rapidly downhill. As the college kids take turns alternately insulting each other and lathering suntan lotion on their pasty bellies, a meatball-shaped meteor the approximate size of a Walmart appears in the picturesque blue sky and slams into the ocean near the boat. "That almost hit us!" exclaims Denise, worry creasing her face. I'm no astronomer but I seem to remember something about meteors causing shock waves and shit, but if you've got a brain, you're in the wrong theater, hoss!

Before I go too much further, let's meet our cast:

Kevin: Aloof and sullen, he's the lonely leader of the crew. Still carrying the heavy burden of his devastating collapse in the regional semifinals of the Central Connecticut High School Debate Invitational, he hides his pain behind a mask of cool and calculated apathy. Kevin's refusal since elementary school to accept the base-10 numeric system as an unavoidable tenet of modern society is scoffed at by many, but remains a symbol of quiet pride to his friends. He has achieved a modest degree of fame on the web by nurturing the single largest online community dedicated to the band Survivor, which is ironic because he's the first one to die. LIKES: base-12, the Eye of the Tiger DISLIKES: predators, islands.

Eric: Craggy good looks and puppydog eyes may drive the harbor girls crazy, but it's this beach-loving hunk's fierce dedication to the spare and haunting art of haiku that keeps him from going batshit insane from the trials he endures on PREDATOR ISLAND. A close brush with death at the tender age of four minutes drove Eric to the passionate study of martial arts. The forgotten descendant of Eomer, fabled captain of the Rohirrim, Eric dreams to one day return to the glory of the Golden Hall of Rohan. LIKES: iambic pentameter, Wu Tang. DISLIKES: wire-fu, Uruk-Hai.

Chris: The "wild man" exterior conceals an even wilder interior. Raised by an aboriginal tribe of dingo-men in the heart of the Australian outback, Chris comes to America as the surprise inheritor of Aaron "Melrose Place" Spelling's entire estate, consisting of several million dollars in Southern California real estate and a palatial mansion on Rodeo Drive. Blinded by his newfound riches, Chris has fled to the coast to commune with a mysterious "Ant God" which only he can see, and to recover his strangely and suddenly dormant sense of smell. LIKES: sugar water, motorcycles. DISLIKES: eucalyptus leaves, multi-syllabic words.

Denise: Beneath the bubbly personality and the Valley Girl looks lies a personality as deathly cold as the Arctic glacier that spawned her. Revived from a cryogenic state of suspended animation, Debbie is one of the last living Seekers, a race of benevolent beings residing deep within the Earth's core. Curiosity brought her to the surface; her love for energy drinks and the precious taurine they contain keeps her here. LIKES: Rockstar, the Detroit Red Wings. DISLIKES: Chris, the Yellow Ball Of Fire In the Sky.

Heather: Always ready with a sassy retort, her sarcastic quips are a carefully-constructed façade. The illegitimate daughter of Patriots quarterback Tom Brady, Kim possesses moderate paranormal abilities, including a crude form of telepathy that permits every piece of wooden furniture within thirty feet of her to know exactly what she is thinking. Determined to hone her strange powers for use in the service of the human race, Heather has come to Predator Island in search of Do-Koyu, the legendary telepath who patiently awaits Heather's arrival and meanwhile is disguised as a tastefully minimalist Ikea entertainment center. LIKES: Escape To Witch Mountain, collapsible card tables. DISLIKES: minorities, particle board. 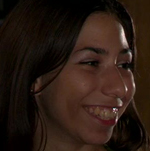 Kim: (Special supersize pic)I have no idea, but Jesus Christ, look at this chick's grille! I kept expecting her to open her mouth and have a smaller Alien-style mouth come sliding out with a oily hiss. I don't know what secret laboratory spawned this genetic aberration but I hope they get overrun by T1000s sometime soon. Kim is convinced that she is blessed with an adamantium exoskeleton, yet her pesky bones continue to break like twigs with each death-defying fall she takes. LIKES: fruit, Ripley. DISLIKES: braces, Magneto. 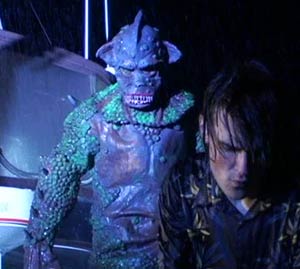 I can only speculate how much better this film could have been with such an eclectic cast, but let's return to our story. The boat founders as power is lost, and Kevin hops out of the cabin to pull up the anchor, only to be attacked by the Swamp Thing. Seriously. Remember the Swamp Thing? The predator of Predator Island is a dorky green dude with a head like a horned toad and big rubbery fingers. Coyly referenced as "Blarg!" in the credits, the creature's motivations are sketchy; it's strong enough to thoroughly kick anyone's ass, yet it only takes out Kevin, mesmerizing/possessing him with a terrifying molten-slime stare. Once visually impregnated, Kevin returns to the cabin, whereupon the boat basically sinks for no reason. Our intrepid heroes swim to the shore of the nearby island, where they're met by the lighthouse keepers there, Roy and Debbie.