What Is A Video Game?

The internet contains many helpful forum posts and comments from friendly people who are eager to explain exactly what video games are. Their insight is usually framed in the context of, "That thing you like isn't really a video game, because I don't enjoy it." 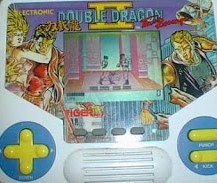 Pictured: Video games.The problem is, these benevolent intellectuals can never quite come to a consensus on what a video game really is. What's your definition? Please take some time to consider your answer. Video games can only be one thing, so you only get one choice.

1. A video game is a thing that lets you wear shades, spike your hair, and tilt a controller all over the place while your mouth hangs wide open. If the game is really good, you'll have a poster of a skateboarder in the background with the label "COOL!"

2. Video games are a wide-ranging group of experiences where the main character discovers the true depths of their inner self by being really good at killing hundreds and possibly thousands of things.

3. Video games are cartridges and they are sold in cardboard boxes with instruction manuals and sometimes maps.

4. A video game is something with gameplay. Gameplay is aiming guns, doing quick time events, moving a guy into cover or into another guy, and getting XP. Nothing else qualifies.

5. If you see that Mario guy it's probably a video game.

6. Video games are things that make people ask "What is a video game?" and they are covered by journalists who ask "Why is video game journalism so problematic?" on sites bankrolled by people who ask "Why should we pay writers a living wage and create a stable environment that allows for stories that aren't aimed at the lowest common denominator?"

7. A video game lets you rip that guy's spine out if you hit the buttons right.

8. Video games are those things you download on your iPhone so you can pay 30 cents every time you need a bag of seeds or a key or a mana potion.

10. A video game is a form of entertainment that lets you watch a wall of credits roll by for around 20 minutes. If it's a Ubisoft game, that figure is closer to an hour.

11. A video game is a poor replacement for human interaction, but it's a great way to find out what it's like to date an anime.

12. Video games are those things that answer life's biggest question: What would people scrawl on walls if bad things happened in the place where they live? As it turns out, they would write "GO AWAY WHILE YOU CAN", "WE'RE ALL DOOMED", or "FUCK THE ALIENS" in spraypaint and sometimes blood.

13. A video game is a reminder that you should be careful while staring into the abyss, lest you become a monster yourself.

14. Video games let you see where the grenade is going to land before you throw it.

16. A video game conditions people to endure one basic idea repeated again and again, and to enjoy themselves even when the experience obviously went on far too long.

17. Video games are those cabinets down at the arcade. You know, the ones that you stand in line to play. If you're good enough you can get the high score.

Saints Row IV
Simultaneously the game that Crackdown 2 should have been, the best voice compression since Double Dribble, a Jedi simulator, an extended sick burn on Mass Effect, and a mishmash of every idea in the universe that somehow works on a grand scale while remaining incredibly fun to control in any given moment. 9/10

Space Hulk
Hulk crash (because there are bugs). 6/10

The Bureau: XCOM Declassified
How did this game survive an extended stay in development hell and live up to 90% of its potential with a surprisingly cool tactical combat system, only to stumble at the finish line with a clunky story and tone deaf dialog? 7/10

Killer Is Dead
If you care more about the answer to "Isn't this crazy?" than "Is this good?" or "Is this actually creative or just lazily shocking and exploitative?" you'll love every Suda 51 game more than the previous one. 4/10

Lost Planet 3
I'd like to remind the universe that we only received two installments of No One Lives Forever. 4/10