Once again we have arrived at a most magical time, when video game reviewers comb through hundreds of releases - from big budget blockbusters to indie darlings - to pick the very best. You've been waiting all year for this moment, so let's get right to your nominees for the Video Game Article Year-End Award Logo Award!

Cashing in on the popularity of music games like Rock Band, Guitar Hero and Cabela's Big Game Hip Hop Rhythm Deer Hunting, Gamespot's Best Of 2008 Awards logo has adopted the form of an orange guitar pick. The elongation of said pick represents the common man's need to stretch every dollar when buying games in the current economy.

While poignant, this might depress readers at a time when they should be tremendously excited about being told which games they played were the best by a group of strangers.

IGN: Best Of 2008 Golden Shield Blocking Something Orange And Shiny 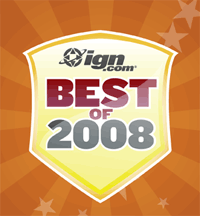 The shield: A symbol of strength and courage. Floating, semi-transparent stars: A symbol of clipart. The orange starburst pattern: A symbol that the contents of the suitcase in Pulp Fiction are now behind the shield. 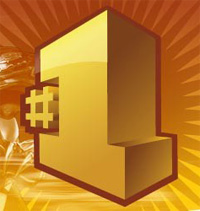 There were many numbers that 1UP could have gone with. 42 is pretty good. 3,192 has garnered quite a following in recent months. 10 is my personal favorite. But no, the faltering network chose the number 1 in a surprising display of confidence. They also got the memo about orange.

GiantBomb: Bomb With Eagle On Canvas

Giant Bomb is a great new website, but they really missed the mark with this award logo. Why the bomb??? 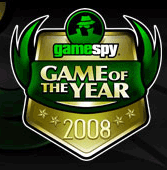 Ah, baseball. The smell of the crowd. The roar of the wood chipper. The startled cries of my closest friends as I cower beneath the bleachers and tell myself there's nothing I could have done for them. I hate baseball.

Metacritic has become a tremendously powerful force. The review score aggregator is cited by marketing departments and game publishers as a baseline indicator of a game's success despite the fact that a 7 out of 10 on one site might be the same as a 3 out of 10 on another. It represents all that is wrong with one aspect of the industry, which of course means that it is wildly successful.

With all that success, you'd think that Metacritic could afford a shield, banner, or at least some gloss. Instead, we get a traffic sign that's not fit for a "CLICK THE STREET WHERE PRINCESS DI CRASHED TO WIN A HD-DVD PLAYER" baner ad. 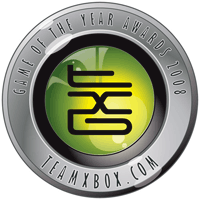 And the award goes to... 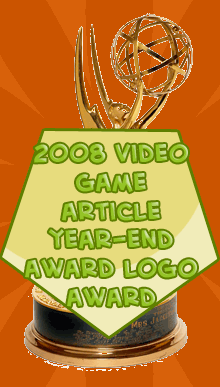 Tough times have fallen upon the 1UP network.

Games For Windows Magazine and GFW Radio (the best pc mag and podcast respectively) closed up shop. Just about every single person who made the site worth visiting is now gone. Those who remain have been given stuffy-sounding titles like "Game Group Editor" and "Features Group Editor" and "Game Features Group Paradigm Analyst" which seem to change every few weeks.

Electronic Gaming Monthly's new editor-in-chief can't stop congratulating himself on taking the magazine in a bold new direction long enough to actually take it into a bold new direction. I suppose you could argue that he's doing a good job of taking over for Dan "Shoe" Hsu, who retired after sustaining an injury during a year-long session of patting himself on the back for being a beacon of journalistic integrity.

The best content the site currently has to offer is its flagship 1UP Yours podcast, thanks to Shane Bettenhausen and John Davison. Their contributions counterbalance Garnett Lee, who takes the Fox News approach to hosting via feigned ignorance and contrived arguments when he's not using phrases like "game space" and "play space" and "compelling emotional space" to show that you can sound intellectual when talking about Sonic Unleashed.

But all that, it seems, is in the past. With their unparalleled year-end award logo, the 1UP network has signaled a return to its former glory as that cluttered site with a full-page interstitial ad you have to skip every time you visit.

Lord Of The Rings Online: Mines Of Moria
Buy the collector's edition to get a replica of the one ring, then slip it on your finger to become as invisible as this amazing expansion will be to the mass market. 9/10

Rise Of The Argonauts
Two minutes of decent fighting for every ten minutes of horrible dialogue, which actually makes this more true to professional wrestling than any WWE game to date. 6/10