When the first Harry Potter book was released it was a smash hit with children of all ages. That was 10 years ago. With the release of the final book in the series we are seeing those 10, 11, and 12 year olds turn into maladjusted adults right before our eyes. These are people who never grew out of Harry Potter. With one series author JK Rowling ensured that whole generation of children would never mature mentally or emotionally and dress up as their favorite wizard in public.

These Potter fans are unable to hold a job, continue to live at home, and for those that haven't dropped out yet, do poorly in school. They instead focus their attention on the many Internet message boards that plague this online wasteland. They write fan fiction, fan art, and roleplay a life unattainable in our magicless society.

That's why in honor of the death of this horrible plague of a book series we've scoured all the major Harry Potter message boards to find the worst of the worst in Potter fandom. Hopefully now that the series is over, a generation of budding adults can finally grow up.

Let's start this off with a bang, Joe P.! Joe P. always started things off with Draco/Hermione slash fiction.

As you can see I clicked it.

A 2 year old does not GET Harry Potter. Only when they are an adult can they truly appreciate a childrens' book.

Wow, that irreverent Internet humor is just too much.

I'd sure love to sit around on the Internet all day and roleplay school. But wait, this is wizard school roleplaying, unlike real school where you can actually learn something and get a degree and maybe get a decent job and then dig yourself out of your pathetic rut. But that's no life for a Harry Potter fan.

These roleplay threads go on for hundreds of pages and never end. If they ever made a Harry Potter MMORPG then Borders and Barnes & Noble would have no one to man their cash registers.

You forgot stupid and fat. Well, probably. I mean, who can write something like this that isn't pushing 300 pounds? 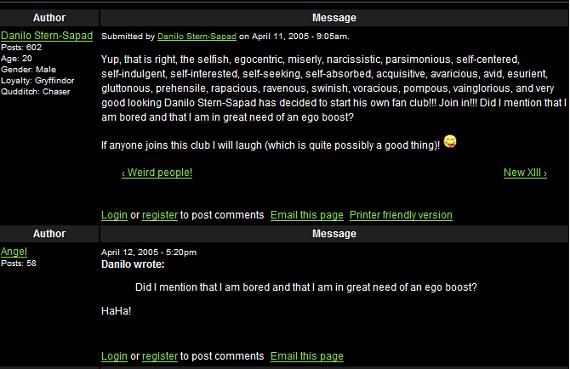