Wednesday, Jun 07, 2006 by Dr. David Thorpe (@Arr)
Oh christ, It's been like eight months since I've done a Demo Roundup, I guess that means I pretty much have to done one now since I've got 200 unused demos sitting on my hard drive. I hope you don't hate reading these as much as I hate listening to your stupid songs!

Immediately, this has two qualities that distinguish it from most Demo Roundup entries. First, there are women involved with it. Yes, you have every right to be taken aback: women. Secondly, and perhaps even more perversely, it is not some kind of a Staind/Nickelback post-grunge angstfest. The outrage! The sacrilege! They’re women who seem to be having fun. In a sphere dominated by depressive, chubby all-male kinda-hard rock bands, Di$h and ShiQuana have some kind of nerve to be flying their female freak flags and jacking the melody from 2 Live Crew’s “We Want Some Pussy.” Unfortunately, the song is terrible, otherwise I’d say “bravo.”

Ladies and gentlemen, this is the sound of a group of young men who have freed themselves of all ambition to be cool. They have embraced blandness with gusto, and have stumbled upon a sound so mayonnaisey-white that it makes Creed sound like Captain Beefheart. Saying that Soundside is tailored to the lowest common denominator would be giving them too much credit; Soundside is tailored to the lowest common denominator’s mom. Soundside is a Thomas Kinkade painting of a Nora Roberts book about a QVC Shopping Special about a rock band. They are either a cynical commercial ploy to be as appealing to morons as possible or they met at a support group for people who don’t have souls. Let me lay it out clearly so there’ll be no confusion:

If one is so unfortunate as to stumble upon Soundside’s Myspace profile, one will see a photograph of them standing outside CBGB, which they undoubtedly recognized only from some 14-year-old skater’s t-shirt. Get the fuck away from that place, Soundside, you ignorant, stupid pussies. Richard Hell would spit in your stupid faces if he heard the words “rock and roll” disgraced by your lips. You had a lot of fucking nerve sending me your demo, you pieces of shit. Cancel your shows, quit the band, and get thee to a trade school. If you’re lucky, this world needs four more plumbers, because they sure as fuck don’t need Soundside.

The New Minority – I-95
Click here for an mp3 sample 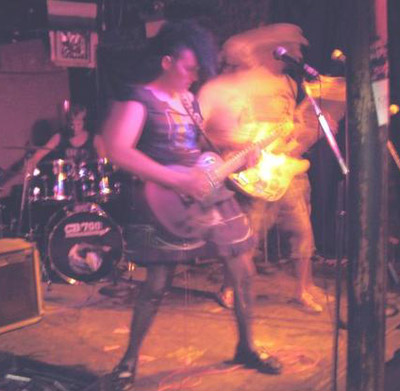 Well, The New Minority are in just about the best timeslot they’ll ever hope to be in: the much coveted “right after Soundside” timeslot, which can make any band in the world sound a million times better in comparison. So, in that respect, they currently hold the all-time world record for Best Band Ever, but that’s merely a temporary title which will probably fade away in about three minutes. To be fair to The New Minority, I came back and listened to their song again after clearing my palate and washing my senses of the crap-rock debacle that so scarred me, and I’m pleased to report that they actually are pretty good. If anything washes away the taste of boringness, it’s a dude in a dress laying down Daniel Ash riffs and screeching like a lunatic. Best of all, they pass all the criteria for the Dave Thorpe test for starting a band:

I hope that this short guide will lead to better Demo Roundup entries in the future.

The Pill – Boy
Click here for an mp3 sample

Next up, we’ve got a three-quarters female punk outfit from New York City. Have I died and gone to heaven? Is God rewarding me for making fun of Soundside? If I don’t hear some dudes with nasal voices singing about the darkness in their souls soon, I’m going to start getting spoiled. Don’t get me wrong, this song isn’t particularly good in any respect, but hearing a girl punk band in the fucking Demo Roundup is like a vacation to the Bahamas for my ears.

This idiot, in his e-mail to me, said that his band was influenced by “retro video games, anime, and EBM.” Wow, that’s some really artistically fertile ground, buddy. You might as well just put a warning on your concert flyers saying “no girls allowed.” Predictably, this is the worst kind of “wacky” nerd-crap. This lame character seems to put way more effort into his dreck than most jokey internet dork bands, and frankly I don’t know if it makes it better or worse; about 75% of the songs I get in the Demo Roundup are “hilarious” internet guys who make “hilarious” awful nerd songs that only their best friends would even pretend to like. This guy does exactly the same thing but on a grand scale.

Weirdy-beardy, interesting, but too much reliance on the ol’ vocoder brings up negative Cher associations. I kind of like it, but if you’re reading this, Funboy, don’t let that go to your head, because I have no idea why I like it and I’m not going to trouble myself figuring it out. It kind of reminds me of an insane version of Ian Brown’s solo stuff (don’t bother finding out who that is, it’s not worth it).

Fellas, I think your donkey is out of tune.

Here we have an Israeli band which features a dude with a maudlin, Garfunkelesque tenor who seems to take himself extremely seriously. I’ll give these cats credit for ambition, but I’m not sure how any sane person can stomach a song so festooned with pretension and oozing with corny bathos. Corny bathos! I am picturing a fat man taking a bath in a tub full of creamed corn. Use that for your next album cover, Solstice Coil! Better yet, don’t make another album!

Spiked Karpet – My Dreams Are Not Always Wet
(No MP3 of this one, ‘cuz it sucks!)

It wouldn’t be the Demo Roundup unless I put in one song by some numbskull who thinks he’s funny. It also wouldn’t be the Demo Roundup if I didn’t have at least one idiotically grandiose e-mail from some numbskull who pretends his joke music is great because pretending your horrible joke music is great is hilarious, right guys? Right? And nobody’s ever done that before, right? So anyway, here’s what this hilarious guy had to say about his hilarious music:

“I'm not trying to sound cocky and shit, but we're gonna revolutionize the music world. This is the NEW GENRE of music. nothing remotely similar has ever been done before. This my friend, is the future of music. I could go as far by saying we're ahead of our time. We're definately gonna make it big, and we'll go down in history of rock music.”

Yeah, guess what, you’re wasting my fucking time and everyone else’s with your stupid played-out joke, and I’ll spare their ears and defeat your hilarious intentions by not putting up an mp3 clip of this dumb shit. Now stop reading this site and never e-mail me again. Thanks. 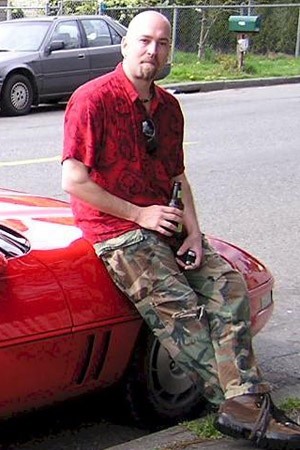 This Kelley Vice guy is the little engine who just fucking would not stop e-mailing me. This is the third time he’s been featured in the Demo Roundup; the first time, he submitted a Firehouse-style monster ballad with his band Fireweed, which I panned as being a Firehouse-style monster ballad. Last time, he submitted a track that sounded like the theme song to an unaired sitcom pilot starring Sinbad. I was not kind in reviewing that one, either. Determined to one day impress me, Kelley has submitted this instrumental track filled with reversed guitar jammin’ and goofball percussion. It kind of sounds like a rock and roll version of the indigenous folk music of some imaginary Eastern European country. As always, Kelley Vice’s recording and musicianship is impeccable, but he still hasn’t learned to put a song together that doesn’t sound like it was written by an old guy battling his midlife crisis with a dyed purple soul patch and a rad jester cap he bought at the county fair.

That said, I’m pleased to report that Kelley Vice can now stop fucking bugging me, because this song isn’t that bad, really, and I begrudgingly grant him the honor of a 51% favorable review. You’re not awful, Kelley. Get used to being damned with faint praise. Also: Razorburn? The title of this song is fucking stupid. Call it something awesome like “Galaxy of Ass.”

It’s nuts how much foreign stuff I get in the Demo Roundup. Where’s this one from? Hell if I know! Am I going to try to figure it out? No! Let’s just say it’s from Vilkjyavandostan and that it’s basically a galaxy of ass (sorry, Kelley Vice, I know I made out like a galaxy of ass was a good thing, but I was just fucking with you). Also, this song has like three movements to it and it seems to never christing end.

Tee-X – Getting Darker
Click here for an mp3 sample

And this one is from Brazil. At least this guy has the decency to sing in English and to not suck. Thanks for not sucking, Tee-X, if I’m ever in Brazil I’ll buy you a goat, or whatever it is that you savages use as currency (joke’s on you, sucker, I’m never going to Brazil, I’m allergic to big fabulous booty).

This one is an instrumental with very little character, so if you’re ever on the outs with your old lady you can just send her this song and tell her you wrote it for her. She’ll be flattered!

This one is an instrumental too, but don’t send it to your old lady or she’ll ask why you ripped off the bass line from the underground levels in Super Mario Brothers. Busted!

If you want your stupid demo featured on the stupid Demo Roundup, please read the following stupid instructions:

Please mail your demos to davidthorpe@somethingawful.com with the subject “DEMO ROUNDUP.” Give me the name of your band, where you’re from, and what the song is called, as well as a link to an mp3. You have no idea how many people just sent a link to an mp3 file and expected me to magically guess the name of their band using nothing but my internet fame. The rule is: if it takes me more than ten seconds to determine the basic fundamental information, I’m not going to bother. If you tell me that your song sucks, I won’t listen to it.

DO NOT ATTACH FILES

DO NOT ATTACH FILES

ARE YOU AN IDIOT? DO NOT ATTACH FILES!

New rule: bands with “hilarious” names like SEX BASTARD JESUS NINJA will not be listened to by me ever, ever, ever again. Nothing spells inept white kids screwing around in a bedroom like a “hilarious” band name. Get a real name.

Don’t link me to your Myspace profile unless the mp3s are downloadable. Yousendit links are useless, because they expire after seven days and I don’t download every single demo as it’s sent to me, I download them all at once every few weeks. Soundclick, purevolume, and its ilk will also likely be ignored. The best way to get me to listen to something is to make it easy for me to download it, because I’m lazy and I owe you nothing!