Who Will Save Rock?

This week, Dr. David Thorpe uses the power of scientific analysis to determine which band will be the true savior of rock and roll. Using NASA's top-secret ROCKSTAT technology, Dr. Thorpe has cut through the magazine hype and calculated with unerring accuracy the band which is destined to pull us out of the current musical slump.

I’m sure this has happened to you: you’re tuned to your local modern rock station, 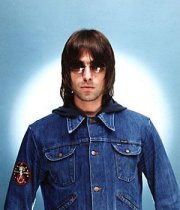 Oasis: Pure Human Tragedylistening to Linkin Park and silently lamenting the death of rock and roll, when suddenly a song comes on that you don’t immediately recognize; miraculously, it doesn’t sound super-compressed and mashed together with Pro Tools. You can actually hear the sound of real guitars and drums. Just as you’re starting to get curious, you realize that the station’s randomized computer playlist has simply hit upon its monthly spin of, for example, Don’t Look Back in Anger by Oasis. Your face flushes with shame and rage as you realize that Oasis, no matter how severely they sucked in 1994, are starting to sound comparatively pretty good. Maybe, you think, if Oasis was brand new in 2004, it would be the best new band around. Do you know what this is called? This is called pure human tragedy.

If you’re in your twenties right now, there’s a good chance that you’re currently pathetically pining for a return to the music of the 90s. On one hand, you ought to snap out of it, because whining about stuff like that makes you sound like an old person. On the other hand, though, it’s understandable; it would seem to most that rock and roll is coming off a high and falling into a deep, deep slump. If you can’t stand Nickelback but aren’t lame and desperate enough to listen to emo, you’ve probably been pretty much left out in the cold. The music press certainly knows this, and it’s come to the point where they’re snapping up stylish, clueless indie bands and declaring them the “saviors of rock and roll” at a rate of about one per month. Bands that ten years ago would have been nothing more than mediocre curiosities who stalled low in the charts are now transformed into mediocre curiosities who stall low in the charts despite an outrageous amount of hype. In the past few years we’ve seen far more Knacks than Nirvanas.

It’s fairly easy to look at the progression of popular rock and roll as an endless string of hype, backlashes, and downfalls; this doesn’t only apply to bands, but to entire styles; anyone who’s seen Riki Rachman impotently whining on some MTV retrospective about the much-deserved demise of Headbanger’s Ball knows that grunge effectively rendered hair metal obsolete. Similarly, punk music, in its backlash against traditionalist rock and prog-rock, provided an exciting alternative for kids who didn’t like Pink Floyd. The logical thing to do at this point would be to uselessly assume that this is some sort of pattern, and that some wonderful new style is going to come along, helmed by some audacious and exciting new band, and it’s going to thoroughly shame, ridicule, and destroy such outdated annoyances as post-grunge, nu-metal, and rap-metal. Luckily, I have devised a system through which I can find just such a band.

Those of you who’ve read my column before might recall that I am a bona-fide incredibly super smart genius. You might also recall that due to my position as a scientific forklift operator at NASA, I have access to the most super-advanced, cutting edge technology known to man (in fact, I’m writing this column on the very same computer that they use to control that little robot fellow they put on Mars. I hope they don’t mind that I took it home for the weekend). I’m not just telling you this in the interest of demonstrating how much better I am than you, although that is certainly an advantage. In fact, I’m telling you this to introduce you to my radical new idea for finding a rock and roll savior.

NASA is not an organization which leaves any elements to chance. Unlike the music press, we don’t just go by our gut instincts; we are interested in cold, hard, empirical scientific reasoning. As such, we use ROCKSTAT, (the most advanced computer rock and roll analysis software in the world) to determine all the music that will be played for the astronauts in the space shuttle. We need to be able to find music that will invigorate them when needed, relax them when needed, and amuse them or enliven their spirits when needed. This software contains a vast database of the characteristics of tens of thousands of bands and albums, from the early beginnings of rock and roll right up to the newest indie releases. What I intend to do is define the exact specifications of a band that can serve as the much-needed antithesis to the post-grunge crap of today. I will then feed these specifications into ROCKSTAT and allow it to determine the perfect band to “save” rock and roll.

After careful consideration, I have determined that the optimal savior of rock and roll must conform to the following guidelines: 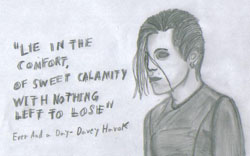 AFI: WTF1. No More Angst: There have been too many bands out there relying on boring teenage depression lately. From Linkin Park’s vitriolic condemnations of being grounded by their mothers to AFI’s indecipherable, effeminate screechings about general, non-specific discontent, it’s impossible to turn on the radio without being endlessly bombarded with somebody else’s problems. I’m not saying that the savior of rock and roll can’t sing songs about things like relationship problems, but for God’s sake, just stop whining.

2. A Spirit of Fun: We’re all tired of humorless, over-serious rock videos featuring skinny, disheveled drug-addicts thrashing around in ruined, decaying apartments and pining for gaunt, crying women with running mascara. No, we never again want to see that ubiquitous slow-motion shot of the crying woman turning around and angrily swinging her arm behind her in an attempt to beat back the innocent and apologetic lead singer who’s just trying to reason through this wasteland that is love. I want to see a video with some sight-gags, God damn it, and I don’t want it to be some pop-punk video set in a high school, either.

3. Competent Musicianship: There has to be some happy medium between the hideous gaucheness of post-grunge power-chord bashing and the googly-eyed electronic hogwash of Radiohead. We want experienced musicians who take pride in their work but aren’t constantly trying to impress us with prog-rock razzle-dazzle. It must be possible for musicians to get together in a studio and actually play music, unaided by endless sampler-tweaking to make each and every note sound perfect and robotic.

4. A Strong Sense of Melody: Apparently everyone’s passion for a good tune died many years ago, as music today seems to plod from verse to chorus to verse to chorus without any real direction. Here’s something fun to try: play the vocal melody of an old David Bowie song on a piano. Nothing special, but it pretty much sounds like music, doesn’t it? Now try it with the vocal melody of that shitty new Nickelback song “Someday.” Did you notice anything different? Yes, that’s right, it sounds like something a toddler would bang out on a novelty xylophone that only plays a major scale. The savior of rock and roll has to be able to write a tune that can stick in your head for some reason other than the fact that it irritates you. 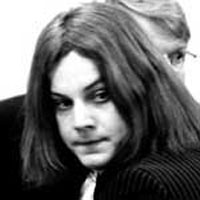 Jack White: Terrifying5. An Engaging Frontman: No more rail-thin dudes with greasy, randomly arranged hair, and certainly no more gruff, gravelly-voiced long-haired “tough guys” in designer jeans. One of the reasons that The Strokes entirely failed to save rock and roll, as you might recall, was that they had a lead singer who, by virtue of his glassy-eyed stare, was often mistaken for a Weekend at Bernie’s style propped-up corpse. And Jack White, of course, is a pallid, crazy-looking indie thug who’d scare the shit out of you if you met him in a dark alley (and beat the shit out of you if you happened to be in the Von Bondies). Since we all got burned once before due to Kurt Cobain’s mental instability, maybe this time, instead of being a wild-eyed crazy, the savior of rock and roll needs to be someone suave and collected. Perhaps someone well-groomed and well-spoken, the kind of guy who could have been an actor if he hadn’t chosen to sing.

6. A Traditional Musical Style Made New: Even the music press knows this one. At this point, there doesn’t seem to be a lot of innovation available in rock and roll, so maybe it’s time to revisit past styles and see them in a new and modern light. The revival of garage rock has only lasted a couple of years, and already it’s tiresome and played-out; why not revive just plain rock-rock? The world, at this point, needs a straightforward tune and a good backbeat.

Now that my vast musical expertise has been complied, it’s time to feed these critera into ROCKSTAT and see which band is destined to save rock and roll. This shall be the ultimate melding of man and machine, a combination of my human intuition with the amazing analytical capabilities of state-of-the-art computer technology. Here is the full output of ROCKSTAT’s analytical results:

There you have it. Science does not lie, ladies and gentlemen. The savior of Rock and Roll is Huey Lewis. Huey just released a new album in 2001, so it looks like we should all go out and-- you know what? Fuck this. Let's just assume that rock and roll is dead for the sake of our own sanity, shall we? If you have any questions or comments, or if you would like me to commandeer any NASA equipment for you at wholesale prices, you can always send me an e-mail.