Double feature this week: Jason "Turd" Ferguson rips The Hold Steady and its fanbase, taking a shot at The Boss in the process, while the hand that writes and quickly moves away puts together a tribute to a real legend. 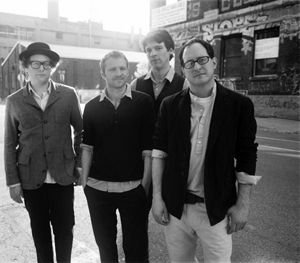 Got artistic debts no honest man can pay.

No matter how hard even the most diligent and open-minded music fan tries, there will always be some cornerstone band or legendary artist whose popularity and/or critical acclaim never seems to translate into that music fan having an active love for said band or artist. For some, it might be Dylan; for others, it might be U2; it might even be Motörhead (though I find that impossible to fathöm). For me, it's goddamned, motherfucking Bruce Springsteen.

I can give the man his popularity, because, if nothing else, he's a populist at heart. But the lavish, unending praise slobbered upon almost every single thing he does, even if it's slobbered in an apologetic way? The scholarly tomes dedicated to breaking down his work? The fanatical devotion of men (and they're almost always men) whose taste and critical acumen is otherwise unassailable? All of this is utterly baffling to me. But it's a bafflement that I've been easily able to attribute to factors both generational (on those coming of age in the mid-'70s, Springsteen holds an unshakable grip) and geographic (does anyone else think it's weird that the media capital of the world is located right next to New Jersey? Shouldn't that be an automatic disqualifier?).

I don't get Springsteen - and I never will - but I can at least puzzle out why the guy's got his backers, both the bespectacled journalists and the rock 'n' roll lifers who would sell their mothers for front row seats to the next Giants Stadium show. What I can't figure out? How, once again, my generation has managed to completely disregard the values that built the modern independent-music underground to embrace the very embodiment of mainstream commercial rock. Oh, they don't do it by actively championing Springsteen himself. That's just too uncool. No, they've done it by pretending like the Hold Steady are a band worth paying attention to. 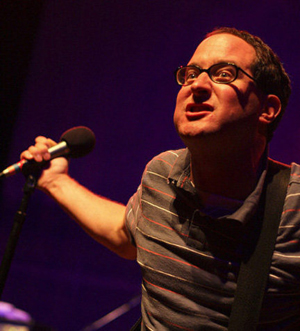 Hey, who wants to listen to this guy's slam poetry?

Now, don't get me wrong. As with Springsteen, the appeal of the Hold Steady is pretty obvious. I'd be appealing too if I wrote simplistic anthem-rock tunes and only sang about being one of the kids, trying to hook up with chicks, and getting fucked up. But elevating that shit to the level of Springsteen? Or, worse, pretending that it's somehow on an entirely more intellectual and valid plane than Springsteen? That's just fucking ridiculous. And, again, I don't even like Bruce Springsteen.

Once again, it comes down to the fans, more than it does the records. One really can't push too much of the blame on Craig Finn, the guy that writes all those songs like "We Can Get Together" and "You Can Make Him Like You." He's clearly a fucking idiot. And, perhaps, borderline retarded. As Megan Seling from The Stranger points out, "On the new Hold Steady record, Heaven Is Whenever (which is only 50% good, BTW), Craig Finn says 'kid' (or 'kids') 12 times. He says 'heaven' 13 times. In 10 songs." While I'll take issue with the "50% good" (lower, Megan) and will also give Finn the benefit of the doubt on "heaven" (after all, it's in the album's title), any guy whose lyrical well is that shallow is probably dealing with some sort of Rain Man kind of shit.

And the band? Envision the most basic, straightforward rock 'n' roll stripped of everything that made rock 'n' roll interesting. Like soul. And vitality. And then imagine it coated with a sheen of "meh, we're better than this." That's what the Hold Steady sounds like. They're trying desperately - oh, so desperately - to be some sort of generational savior of power chords and drinking anthems, but Heaven is Whenever is the sort of rote rock 'n' roll that people ridiculed Poison for making. And it's almost exactly the same album these guys have been making for years. But there are hundreds of boring rock bands in the world today, yet few - okay, none -- have been the recipient of such fawning praise as the Hold Steady.

Why? Who knows. But just like Springsteen attracts both lunkheads and pointy-heads, the Hold Steady draws a peculiar blend of bandwagoneers and those who should know better. In the case of the former, more power to you; I'm glad that, with Bret Michaels in the hospital, you've found a rock band you can swing your cock to. But in the case of the latter, it's completely inexplicable that this music is not only accepted but also held up as a paragon of virtue for independent rock. It's as if Bruce Springsteen's fans lost all of their testicular fortitude and decided that, hey, listening to NPR all day's pretty great, and when I want to rock out, I'll put on thisJohn CougarHold Steady record and tap my foot and try to remember what it was like to enjoy myself at shows.

There used to be a pretty tall and unscalable wall between dumb fucking rock 'n' roll and the sort of stuff that was pushing music forward. Artists had to decide which side they were gonna be on, and music fans knew which side which artist was on. Nothing wrong with listening to both kinds, of course, but to pretend - in an aggressively snotty and nearly apologetic way - that the Hold Steady is anything but weak-ass rock music for pussies is to deny the sanctity of the wall. Pick a side, fuckers, pick a side.