David Icke's Website, submitted by Jacob. Holy fuck, this guy is certifiably batshit insane. I can't even figure out what he is really talking about except for that he rambles on and on about "The Reptilian Agenda" and that he seems to have an unhealthy obsession with the movie The Matrix. 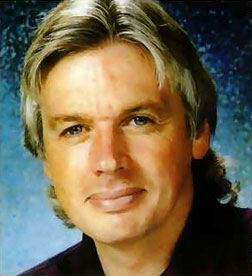 The reptilian and other entities, which are manipulating our world by possessing "human" bodies, operate in frequencies between the Third and Fourth densities. These are referred to as "hidden spaces and planes unknown to man", in the apparently ancient Emerald Tablets, which I quote from in "Children of the Matrix". For simplicity, I refer to this "between world" in my books as the lower fourth dimension.

Wow, I'd better buy that book, STAT! This guy knows what he's talking about.

These reptilians and their allies have corrupted Earth DNA with their own and this genetic infiltration lies dormant until it is activated by the vibrational fields generated by the Illuminati secret society rituals, and others in the public eye like the carefully designed coronations and official ceremonies of many kinds, including even the UK State Opening of Parliament and certainly those of the various religions.

The funny thing is that I don't even have to write anything else to make this guy utterly loony and hilarious.

After I had walked around the ruins for an hour or so in the piercing Peruvian Sun, I went back to the tourist bus to go back to Puno. I thought the trip was over, but it had hardly begun. About three minutes drive down the road I was looking out of the window and I saw a mound to my right. As I looked at the mound, a voice in my head began to say: "Come to me, come to me, come to me." Very strange to say the least, but I asked the driver to stop because I wanted to go and look at the mound.

Yeah, well, too bad you didn't stay in Peru. Forever.


Be sure to check out what you can do to help us win the war against the evil reptilian agenda. Also, take time out of your busy schedule to read these horrible poems that even have audio accompaniment or send a thoughtful e-card to one of your loved ones warning them of the upcoming reptilian invasion!