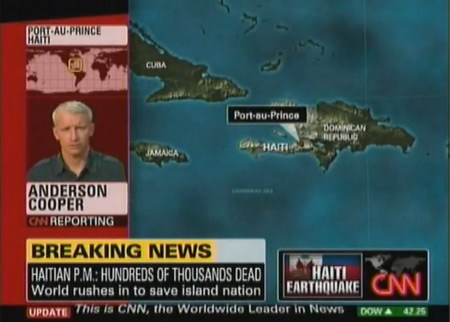 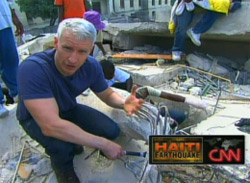 I'm just enjoying being in the limelight thanks to AC 360.Thank you a million times for coming to Haiti and visiting me at school, smashed underneath a 300 pound desk with parts of my brain coming out.

I am a very big fan and I think we have so much in common. Well, not very big at all. I was under weight due to eating mostly paper and beetles, and that was before most of my blood came out. To be honest, as much as we are alike, every time I begin to reflect on our many similarities I am also reminded of our differences.

You are the son of Vanderbilts, you were raised in luxury, and you were given the finest education available.

I am the son of I don't know because two days after I was born my mother traded me to a stranger for morphine, I escaped from a baby brothel operating out of a sewer underneath a graveyard, and I have learned everything I know by watching a half-broken VHS tape of Turner & Hooch.

Many are the times I have daydreamed in our classroom as the video played, yearning to drink the foamy slobber that gathers at the drooping lips of that hound. Have you ever sucked spit fresh from the dog's lip, Anderson Cooper? 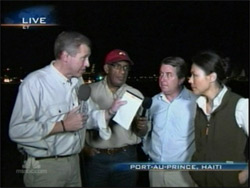 I hope my putrefying guts make Ann Curry's cute little nose wrinkle in disgust :)I have heard from Hector, the man who ran the baby brothel, that in America they give dogs pills so they do not have worms. In Haiti we drink water infested with worms so that we know it is safe enough to drink. Some families boil the water to get rid of the worms, but I don't have a family and I can't afford any fire.

Oh, Anderson Cooper, I am so glad you are here now! I hope you have been able to update your twitter with your thoughts on my brain-crushing. Hey, any of you other crushed corpses seen a crew from Fox News? No? I wonder if their flight got delayed.

Just as my school was crumbling and this desk was popping open my skull like a brain-pimple I wondered if I would ever have the chance to be the face of a tragedy. It is something I have wanted for many, many, many of my best tragedies.

As my reality collapsed into one, final, perpendicular eternity stretching out forever I had plenty of time to contemplate the logistical difficulties of relocating six crew and producers, an editing van, a satellite terminal, and four cameras to my impoverished nation. Even under the best circumstances this would require a special helicopter. Did you have a special helicopter? 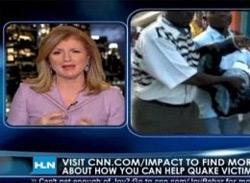 Is my tragic ordeal up on Huffpo yet? I can't check my mobile device with all these brains falling out.Oh, Anderson, thank you so much for wallowing in our suffering. I heard our agonized wailing even brought Al Roker, but his brow does not furrow quite so pleasantly as yours as he witnesses the filth of a gutter polluted with the fluids of a hundred corpses. Does he lift the sheet from my body? No, hardly! His lap band would pop right off in surprise! You are made of sterner stuff. Not even Brian Williams can be more concerned than you.

When you describe the smells I hope you mention me and my contribution. I am getting really ripe under this desk!

Anderson, do you think my picture will be used on Huffington Post? I have been told my anguished face covered in dust is very photogenic. As soon as I am resurrected as an American I am going to take all of my money out of a big bank and place it into a small, local bank. Thanks, Arianna!

Did you know you can text to donate now? It's amazing, such wonders of technology. Just text "Haiti" to 90999 and in 90 to 180 days Sprint will deduct your donation from your bill, take a small percentage, and then pass the donation along to a charity that has already moved on from Haiti.

It always takes an epic catastrophe such as this to bring out the best of the world. I feel that world is getting smaller, do you know what I mean? One minute I am eating warm clay dug from a riverbed to quiet the howls of my empty stomach and the next minute my brains are being stepped in by the segment producer for Anderson Cooper 360. It is as Thomas Friedman always says, the world is flat. I did not think he meant literally flat beneath a 300 pound desk, but I admit to only skimming the opening chapters and then eating the rest of the book.

If you can't make it to Haiti like AC and his 360 producers that's okay. You can still be my hero by donating to an on-the-ground charity.

– A Haitian Toddler Smashed Under a Desk (@sexyfacts4u)