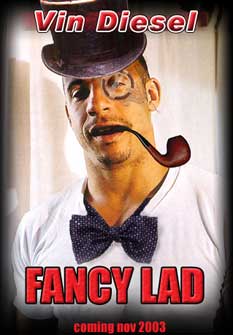 If this is what passes for "entertainment" these days, I'll pass!

Let's face it: Hollywood has gotten lazy. In this day of one-stop computerized special effects, minimum wage stunt doubles, and solar powered automatic hula hoops, the movie industry has their work cut out for them. Many big budget movies such as "Final Fantasy" and "Vanilla Sky" don't even employ real actors to star in them; producers simply hire a bunch of computers and input something called "data" and then a "movie" spews out from a large hole drilled through the computer! The miracle of technology can truly be a mixed blessing in disguise as a gift horse that's had it's mouth looked upon. On one hand, exciting and intriguing film concepts that were not feasible years ago can now be produced by a 10-year old kid wearing a Slipknot t-shirt and using a Compaq in his mother's basement. On the other hand, movie studios have succumbed to their inherent laziness and desire for big bucks while performing a minimal amount of work, using computer-generated special effects to replace things such as "stunts" and "a coherent plotline which makes sense and does not revolve around things repeatedly exploding to the right of Vin Diesel in slow motion."

If you want further proof, you may look no further than the recent Hollywood trend of turning comic books and video games into movies. The film "Spiderman," a movie about a boy who is not really a spider or a man but the producers assumed the title "Somewhat Of a Spider and a Boy" sounded terrible, grossed over 90 quadrillion dollars on its opening weekend... and that was just in Malaysia! The film attracted so many moviegoers in America that many cinemas found themselves forced to construct banks behind them, as their fleet of armored Brinks trucks often ran out of gas while transporting all those burlap bags marked with a large dollar sign on them. Scientists have estimated that if you took all the people who saw "Spiderman" and put them inside the Grand Canyon, you'd probably be responsible for a wide variety of crimes. Movies like "Resident Evil" and "Mortal Kombat 2," both loosely based off popular console video games, attracted millions of people to the movie theaters and caused them to buy tickets for a completely different film. Hollywood doesn't even bother creating new ideas these days, as there are plenty of pre-existing ideas floating around that are ripe to be ripped off, prime to be plagiarized, and kriss to be krossed. With this in mind, I have decided to brainstorm a potentially lucrative franchise which will easily earn me billions of dollars while requiring little to no effort on my part.

"Pitfall!: The Movie" is the result of countless hours upon my porcelain thinktank, a movie which I feel can not only vault me to fame and fortune, but also allow me to get out of my house for the first time this month. As any eBay connoisseur can tell you, there is a recent surge in 1980's nostalgia. Garbage Pail Kids are being sold for thousands of dollars, Alf video tapes are traded on the gold market, and it's really goddamn hard to track down a VHS copy of "Joysticks" starring Joe Don Baker. One of the staples from the 1980s was a little game created by a not-so-little man named David Crane, a gaming industry guru who created such not-as-hit Atari 2600 games like "Dragster," "Fishing Derby," "Fisting Derby," "The Land of 10 Red Pixels," "Escape From the Blue Square," and "God Only Knows What's Happening In This Game." While the aforementioned titles did not catch on with the general public and their fickle video game appetites, "Pitfall!" truly did. If you took every sold copy of "Pitfall!" and put them inside the Grand Canyon, you'd probably smother all the "Spiderman" fans you previously shoved in there. Then you'd have a big lawsuit on your hands and you'd probably blame me for some stupid reason. 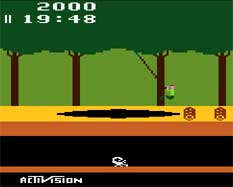 "Pitfall!" taught me everything I ever needed to know: everybody is out to kill me, and the jungle is paved with a bright orange road littered with precious gems.

My point is that the game "Pitfall!" represents a cornerstone of our childhoods. If you somehow didn't grow up playing "Pitfall!," then just wait for the bill I'm trying to pass through Congress which will legally require you to have grown up playing the game. Anybody who resists will be shipped off to a Federal prison camp which is located on Saturn (not the car dealership, I'm referring to the actual planet full in our solar system of car dealerships). "Pitfall!" was one of the many games in the 1980s which taught us how the world really operates and how to successfully live our lives. For example, you should run through life constantly searching for money while avoiding anything else that moves, as it's inherently your enemy and will probably kill you if you come into contact with it. That's one of the primary foundations which powered Reganomics. "Pitfall!" taught me everything I needed to know in life:

1) If you find yourself up against insurmountable odds, there is probably a ladder you can take to drop down a level and face insurmountable odds in a slightly different location, promptly followed by a brick wall.
2) Nature is evil and will try to kill you every chance it gets.
3) All things considered, the jungle floor is very clean and probably maintained by a groundskeeping team who is on David Crane's payroll.

"Pitfall!" didn't really have much of a plot, per se, which makes it even easier to translate into a box office cash cow, as I can simply use my "artistic license" to interpret events and character motivation as I see fit. If you don't believe in its lack of plotline and story structure, let me quote from the "Pitfall!" Atari 2600 instruction manual:

The object of Pitfall! is to guide Harry through a maze of jungle scenes, jumping over or avoiding many deadly dangers, and helping Harry grab the most treasures in the shortest possible time.