Lori's Place, submitted by Me. I am a big fan of crip-fetishists (or "Devotees" as they often call themselves), they are some of the funniest fetish people on the planet next to furries. If you're not in the know you should probably consider your ignorance to be bliss and stop reading now. Crip fetishists aren't people obsessed with LA streetgang The Crips, they actually are upstanding folks who get off on being crippled. Usually they just imagine or pretend they're crippled in their exciting little sexual fantasies that probably involve things like recovering from car wrecks or having osteoperosis. Sometimes they actually go the whole nine yards and either cripple or mutilate themselves, which is naturally great for our funny bones!

Now that I've filled you on Devotees, get ready to be transported to the next level of cripple ecstasy by Lori! Lori is actually a man who is really bad at cross dressing. Imagine putting Bruce Campbell in a mini-skirt and wig, then break his legs and put them in a halo cast and jam him into a wheelchair. That's Lori, (s)he's a crip-fetishist and a cross-dresser! You're in (his)her world now sister! 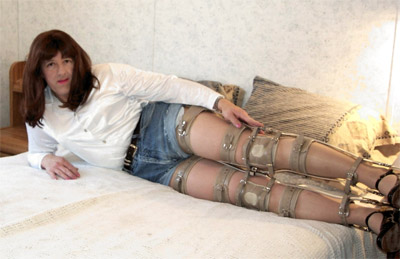 Yes, Virginia... there is life beyond Crossdressing and braces! I hope to use this page as a springboard for links and info about some of my other interests... most importantly, German Shepherds. They are, to me, the most magnificent, loyal, intelligent and loving dogs in the world, and I have lots of info to post about them if I ever get my butt in gear! If you stop here and want to talk about them before I post the links and info I have, feel free to write and talk... meanwhile: Some other topics you will find here eventually are astronomy, lapidary and 3D Computer Graphics.

Way to go, use your crossdressing cripple site as a German Shepherd information repository! Maybe you could put them in little sweaters and strap them into those carts with wheels for when dogs get partially paralyzed by car wrecks.

In addition to having a huge photo gallery AND VIDEO CLIPS in case you need to vomit up an accidental overdose of medication, Lori also has a guestbook that you should sign. Let Lori know how much you appreciate (his)her efforts to take only the hottest transvestite fake cripple pictures!