Thursday, Dec 26, 2002 by Rich "Lowtax" Kyanka (@TwitterHasBannedAllMyAccountsEver)
Know of an awful site? Send it to us and become a hero!

The Lifeboat Foundation - Safeguarding Humanity, submitted by Uber. As each day passes, the world grows closer and closer to the brink of extinction. Nuclear bombs, terrorist threats, and Carol Channing are just a few of the many planet-destroying problems we currently face. It's becoming increasingly clear that our world governments and leaders have no idea how to save us from these rogue entities hellbent on our destruction... GOOD THING PEOPLE ON THE INTERNET KNOW! 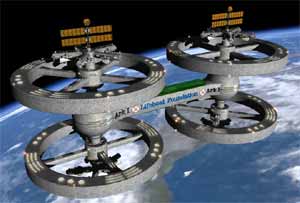 The Lifeboat Foundation is a nonprofit, nongovernmental organization, dedicated to providing solutions that will safeguard humanity from the growing threat of terrorism and technological cataclysm. This humanitarian organization is pursuing all possible options, including self-sustaining technologies using AI and nanotechnology, with an emphasis on self-contained space arks.

Of course, the natural solution to all these problems is simple: build a giant floating dumbbell in space! Yeah, that's the ticket! The Lifeboat Foundation will carefully screen each and every individual boarding their majestic intergalactic car chasis, asking them tough questions such as "are you a terrorist?" and "will you be mean to other people on our Lifeboat?" Then the potential terrorists and people who disagree with their lofty ideas will be jettisoned into space. It's a win-win situation! If you have any other questions, and I don't know how the hell you could after seeing such an obvious answer to all of our problems, be sure to check out the FAQ which contains such gems as the following:

Why isn't the government making preparations to save us from this impending doom?

In the case of gray goo, the government would have to, among other things, sponsor and implement the development of active nanotechnological shields which would have to be embedded in every gram of matter on earth. Not an easy task. And since the government has been unable to solve easy problems in the past, such as computer viruses or even spam, its unlikely they'll get around to solving the really, really difficult ones.

Yeah, the government can't save us from spam mail, so naturally we should all launch ourselves into space! Aces! Well at least we won't have to worry about THE SINISTER GRAY GOO!!!