Thursday, Apr 21, 2005 by Zack "Geist Editor" Parsons (@sexyfacts4u)
Dr. Thorpe and Zack take a journey to the surreal streets of Japan to check in on a popular trend in fashion there. Oh I wish they all could be Ganguro girls.

Dr. Thorpe:We've made fun of some ridiculous fashions, some outdated fashions, and some intentionally goofy fashions, but never before have we witnessed such truly horrific style. In this installment, Zack and I are faced with our most spine-chilling challenge yet: the twisted world of the ganguro.

Zack:Ganguro is a huge trend in urban Japan. These girls (and a few guys) coat themselves in skin bronzer, apply huge amounts of eye makeup, bleach their hair, and cover themselves in bracelets and bright colors. Supposedly this is an attempt to emulate the look of California girls. The reality looks less like Venice Beach and more like one of the layers of Dante's Inferno. 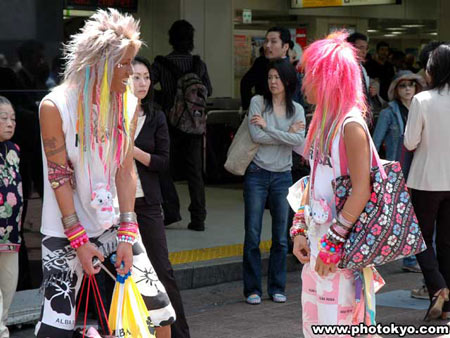 Dr. Thorpe:Look at all the "normals" in the background looking uncomfortable and pretending not to notice the horror that surrounds them.

Zack:They are putting a lot of effort into averting their eyes. In Japan the more attention you try to get the farther people's eyes rotate away from you. I'm sure there is some sort of mathematical equation to explain it.

Dr. Thorpe:This whole fashion trend must be a magnificent boon for Aqua Net. They were probably terrified that they'd go out of business after the hair metal industry collapsed, but along comes this windfall.

Zack:I'm pretty sure the guy on the left is what Native Americans look like if you go through the portal to Bizzaro World. "Me am lowly chief Bizarro Two Feathers. Me am trade you one of my wampum beads for all of America."

Dr. Thorpe:He looks like he'd get cut out of a Final Fantasy game for being "too gay." That is like getting booed off the stage at Amateur Night at the Apollo for being "too black."

Zack:I like how both of them have giant plastic cat toys around their neck. That's very utilitarian.

Dr. Thorpe:A dude wearing a big pink toy cat around his neck is sort of like wearing a MedicAlert bracelet saying he's allergic to pussy. But then again, this photo captures the exact where-have-you-been-all-my-life moment where he meets his soulmate.

Zack:I've watched a few samurai movies over the years where a samurai is late to bring his master a message or something and they're all like "you bring eternal shame on your ancestors!" Man if those guys could see this, the levels of eternal shame would blow their freaking minds.

Dr. Thorpe:Who knows, maybe ancient samurai masters would have been into this sort of shit. You never can tell. Maybe they would have committed ritual suicide from the shame of not thinking of it first. "All this time we've been running around cutting people apart and having cruel sex when we could have bought big pink wigs and expressed our manhood in an even more disturbing and inhumane fashion."

Zack:I don't know, I get the feeling that one of these guys would have come at a samurai yelling really loud and swinging his bag full of lotions and hair care products and then there would be a flash of silver and the guy would slide dramatically into halves.

Dr. Thorpe:I'm going to agree with you to the extent that I'm willing to play out that scenario over and over again in my head.

Zack:After looking at this picture it's one of the few things left to comfort us. I mean other than the fantasy I have that the guy looking into the camera is a yakuza hit man about to draw two .45s and a flock of white doves on these guys.

Dr. Thorpe:But really, whether you're a samurai or a yakuza hitman or one of these guys, all that matters is just grabbing the bull by the horns and getting really into whatever you're into and having a good time and leading a fulfilling life, you know? And who are we to judge... oh man, look at his fucking bracelets, what an absolute tit.

Dr. Thorpe:I don't think we have to worry about that guy and sex acts. Strictly celibate by circumstance.

Zack:Slim consolation. Those guys both apply so much tube tan that they bud sentient tumors that just pop off their back already wearing Bermuda shorts and Lee Press-On nails around their eyes.