Thursday, Jan 26, 2012 by The Gingrich Foundation for Negro Advancement 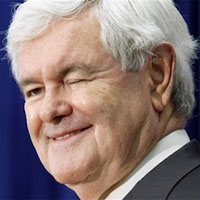 It's me! From the pumpkin patch to your local primary.Hello, black people! You may have seen me on television during the commercial breaks for your Deaf Comedy Jams and Soul Trains. And despite the fact that my hearing is excellent and I would very much like to destroy all forms of mass transit, you and I actually seek the same future. But how, I ask, can the black race possibly work to the best of their ability with feet bound by the shackles of food and shelter?

Yes, your "food stamp" leader of today will soon be replaced by a stern, stout, and handsome figure who believes more in tough love than handouts, but there's no need to erupt into gang-style violence for fear that you will never again taste the watermelons that my nana's decorative antebellum figurines tell me you people so enjoy. While some government figures would rather your race live a life of dull complacency -- sometimes generating spoken word authors that I frankly don't understand and can do without -- I have chosen to break this vicious cycle by volunteering my valuable time to provide an example of how to succeed in the fast-paced world of business (or die trying). Haha, but seriously, some of you are probably going to die.

Have you ever had a friend who disappeared mysteriously from mid-morning to mid-afternoon every weekday? Odds are, the answer is "no" -- personally, nana would never approve of such "mixed company" -- but just go with me on this. Let's call this friend "Steven --" now there's a solid, hard-working name. Ever wonder why Steven always has nicer clothes, fancier electronics, and listens to music that doesn't cause visiting bankers to question the safety of my neighborhood? Well, Steven has what most of us know as a "job;" just by sacrificing 9 hours of his day and ignoring the little voice inside him that won't stop screaming, Steven reaps all the rewards given to productive members of society.

And when Steven buys groceries, he pays with cash, knowing that he'll never have to face the deserved shame of using a food stamp card. Steven has personally watched many members of the so-called "underclass" buying several bottles of designer champagne right in front of him, all the while wondering how someone couldn't afford groceries when buying clothes, shoes and a bus transfer pass was clearly within their budget.

So, want to be more of a "Steven" and less of a "Darnell?" Honestly, this will never happen, and I promise you I will die before it does. But you can at least pass the time with one of several job options!

Jobs: They're Different than Just Sitting Around at Home! 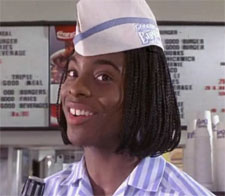 As shown in the popular black film Good Burgers, the food service industry is a boatload of fun! So I've been told.As a member of a sadly shrinking group of job creators, my generous friends and I have teamed up to figure out what you can do with your waking hours aside from the typical monkeyshines. And to you loony liberals out there, rest assured that I have hired a high-priced editor to spot any statements that could be construed as "racist." I didn't get where I am by spending money freely, but far be it from me to act the niggard.

Few of us can resist the siren song of fast food. Even me, a man of great stature and dignity, could often be seen wolfing down a McGriddle or three -- until my government health insurance program threatened to raise my co-pay to five dollars after the fifth angioplasty. Now, imagine smelling those sweet meats and starches, every day for the rest of your life! Not just in your nasal cavity -- your clothes, skin, and very soul will carry the thick, sticky waft of the same corn syrup and animal fat that, for many, provides the only affordable source of sustenance. 15 days' worth of sodium in a single meal? Now that's what I call American ingenuity! And maybe, just maybe, if a large and loyal customer gently caresses your grease-splattered hand during an otherwise average transaction, you won't get so mouthy?

While robots and machines have taken on most of our country's hauling and shoving jobs, they lack the warm demeanor, bright smiles, and pliable spines of their human counterparts. Before the advent of civil rights, brave, black men took to physical labor like nobody's business -- until we atrophied their muscles with years of mathematics and typing classes. Who knows what great things George Washington Carver could have shoved around if not for his fascination with the peanut? Fact is, there's a whole population of men we haven't gotten around to jailing, and a whole lot of stationary objects left unshoved. Let's get to work, black people!

Economics for Black People is brought to you by a generous grant from the Foundation for Adult Onset Babyhead Syndrome.

– The Gingrich Foundation for Negro Advancement